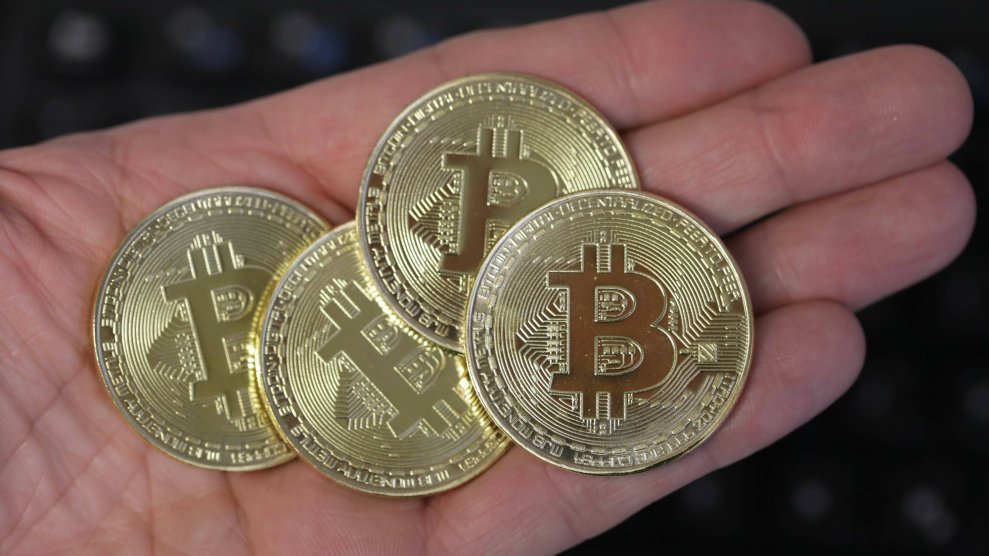 “Bitcoin is the World’s Hottest Currency, but No One’s Using It,” the Wall Street Journal proclaimed on Saturday. The day prior, the digital currency had surged past $10,000 per coin—and then past $11,000, too. But despite Bitcoin’s value, the paper explained, brick and mortar stores have been slow to accept it as a method of payment. Thus, some observers are becoming pessimistic about whether this tech-hipster cryptocurrency, which everyone has heard of but most people don’t truly understand, will ever replace traditional currency. “I don’t think it will be a currency,” bitcoin investor Alex Compton told the Journal. “If people use it as a currency, it will lose value as an investment.”

No one may be using Bitcoin, but we’re all paying for them. Bitcoin analyst Alex de Vries, otherwise known as the Digiconomist, reports that the coin’s surge caused its estimated annual energy consumption to increase from 25 terawatt hours in early November to 30 TWh last week—a figure, wrote Vox’s Umair Irfan, “on par with the energy use of the entire country of Morocco, more than 19 European countries, and roughly 0.7 percent of total energy demand in the United States, equal to 2.8 million U.S. households.” (As of Monday, the figure had reached nearly 32 KWh.) Just one transaction can use as much energy as an entire household does in a week, and there are about 300,000 transactions every day. That energy demand is more often than not met through fossil fuel energy sources, which, along with polluting air and water, emit greenhouse gases that cause climate change.

In other words, Bitcoins are contributing to the warming of the atmosphere without providing a significant public benefit in return. Some Bitcoin enthusiasts claim that it will eventually become a mainstream currency, and that the cryptogovernance system upon which it’s built could actually help the environment. But the Bitcoin market is volatile, its future murky. We only have 32 years left for carbon emissions to peak and then rapidly decrease, if our planet is to remain livable. We don’t have time or resources to waste on Bitcoin.

Unlike cash, a Bitcoin cannot be printed or otherwise “made” by a human. They exist solely in digital form. In order to create one, a computer must access the Bitcoin network and solve a complicated math problem, a process known as “mining.” But there are a finite number of Bitcoins that can be mined—21 million, to be exact—and as more Bitcoins are mined, the math problems get more challenging. Thus, computers must work harder—that is, process more information—in order to solve the problem and mine a Bitcoin. (This Bitcoin can then be sold and re-sold online.)

Off-the-shelf personal computers used to be powerful enough to mine Bitcoins. Now, because the math problems are so complex, they must use specialized hardware called Application Specific Integrated Circuit, or ASIC. These mining machines are big and run hot, and the people who use them—either Bitcoin mining companies or Bitcoin enthusiasts working together—use a lot of electricity to do so. Companies and organizations that mine bitcoin will sometimes have thousands of these machines packed into expansive warehouses. In 2015, Vice profiled a Chinese Bitcoin mining facility that spent $80,000 per month on electricity for these ASIC miners, in order to produce 4,050 bitcoins in the same period.

Because electricity is such a big expense for Bitcoin miners, companies often seek to establish themselves in places where electricity is cheap—and dirty. From Vox’s Irfan:

A study from the University of Cambridge earlier this year found that 58 percentof Bitcoin mining comes from China, describing “an arms race amongst miners to use the cheapest energy sources and the most efficient equipment to keep operators profitable.” Cheap power often means dirty power, and in China, miners draw on low-cost coal and hydroelectric generators. De Vries analyzed one mine in China whose carbon footprint was “simply shocking,” emitting carbon dioxide at the same rate as a Boeing 747.

Bitcoin has been criticized for its energy use for years. In 2013, Bloomberg deemed it“a real-world environmental disaster,” asserting that the mining process used $150,000 worth of electricity a day. Criticism has grown louder as more coins have been mined—from approximately 11 million in 2013 to nearly 17 million today. “Since 2015, Bitcoin’s electricity consumption has been very high compared to conventional digital payment methods,” Christopher Malmo explained recently in Motherboard. “This is because the dollar price of Bitcoin is directly proportional to the amount of electricity that can profitably be used to mine it.”

Bitcoin’s electricity consumption has been very high compared to conventional digital payment methods. This is because the dollar price of Bitcoin is directly proportional to the amount of electricity that can profitably be used to mine it.”

But De Vries’s analysis of Bitcoin’s energy use has been criticized, too. Marc Bevand, an Bitcoin investor, told Irfan that he suspects the currency’s global energy use “was likely closer to 15 terawatt-hours, which is still a huge amount of electricity, but half of the estimate on Digiconomist.” Bevand also noted that mining computers will surely become more energy efficient over time; after all, it’s not like companies want to spend that much money on electricity.

Some dismiss the environmental case against Bitcoin completely. Writing in Forbesin 2013, Tim Worstall called the argument “desperate,” dismissing the currency’s energy use at the time as “simply trivial.” He added, “at some point Bitcoin mining will stop. There is an upper limit to the number that can ever be mined… Thus this energy consumption will not go on rising forever.”

Four years later, though, it’s still rising. And according to de Vries, there’s no sign that it’s going to stop any time soon.

Bitcoin was originally pitched as a benefit to society; a way to eliminate the corporate middle-man (banks) from financial transactions, and instead use the Bitcoin community (known as “the blockchain”) to ensure the validity of payments. This would create a sort of utopia where public trust is restored to the financial system.

Indeed, if Bitcoin could evolve to become what it was intended to be—a way to complete day-to-day financial transactions without the involvement of banks—some say it has the potential to do enormous good. Portia Burton, who runs the blockchain explainer site Bits and Chains, speculates it could be used to prevent atrocities like slave labor in the seafood industry. “With the blockchain, all transactions are identified and sent to an open ledger where governments, companies, and consumers are able to track the origins of their seafood,” she wrote in January. “Suppliers who don’t identify their fish can be actively avoided.”

Writing in the journal Nature, wildlife researcher Guillaume Chapron made the more complicated argument that the environment needs cryptogovernance. “Bitcoin demonstrates that banks and governments are unnecessary to ensure a financial system’s reliability, security and auditability,” he wrote. “For sustainability, blockchain technology could be a game-changer. It can generate trust where there is none, empower citizens and bypass central authorities. It could also make existing institutions obsolete, including governments, and raise fierce opposition. Laws could be replaced with ‘smart contracts’ written in computer code.”

But these arguments flounder if Bitcoin’s promise is not fulfilled. Bitcoin is becoming more and more valuable, but only to people who see it as a wise—or entertainingly risky— investment. Most people use Bitcoins as a way to make money, rather than using it as money itself. In a way, buying a Bitcoin is no different than investing in an unpredictable stock on NASDAQ, but the cost to the planet is immeasurably worse. As it fails to address one societal ill, it’s contributing a staggering amount to another one.