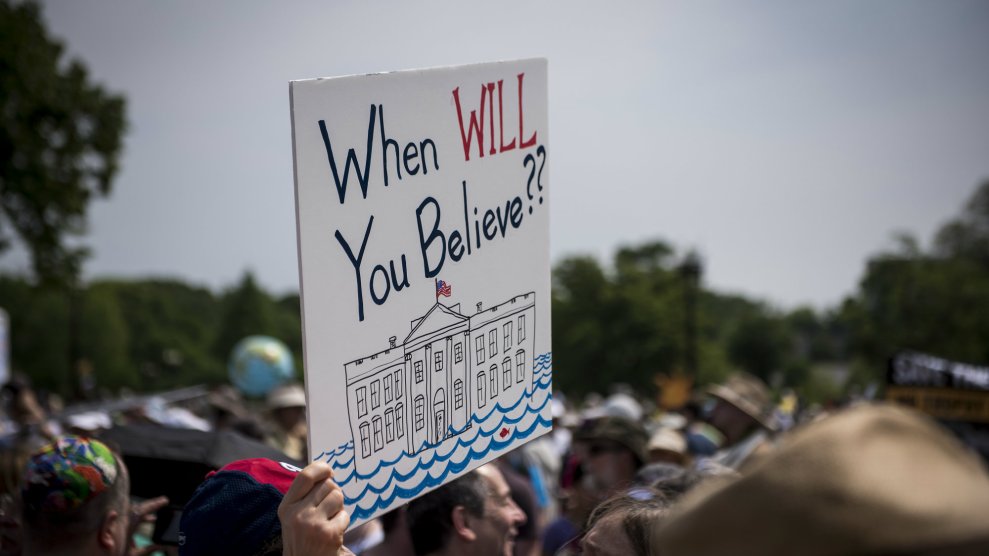 The overwhelming majority of scientists as well as most Americans agree that climate change is occurring and it’s mostly caused by human activity. But for climate skeptics, the consensus means nothing. Though global warming skeptics may be in the minority, they often have an outsize influence on government officials who are invested in denying climate science. Under the Trump administration, climate denial at the highest levels of government has resulted in serious changes to public policy.

Jerry Taylor, a leading libertarian voice on energy policy and a former Cato Institute fellow, used to be one of the skeptics. In fact, from 1991 to 2000, Taylor was what he describes as a “warrior” for climate skepticism. He got paid to go on television to decry the science behind global warming and wrote talking points for conservatives and Republicans to attack those who advocate taking action to mitigate the effects of climate change.

“As long as you’re telling Republicans and conservatives what they want to hear and you say it with a healthy dose of snarling about Susie Cream Cheese and tree huggers,” said Taylor, “you’re probably just fine.”

Many Republicans today are invested in denying climate science. President Donald Trump once called global warming a Chinese hoax. Environmental Protection Agency head Scott Pruitt doesn’t agree that CO2 is a major contributor to climate change, and Rick Perry, who leads the Department of Energy, doesn’t think humans are the main factor behind the warming planet.

Gradually, Taylor realized he was wrong—not immediately, and only after grappling with his own arguments for years. But eventually, he became a believer. Can other climate skeptics go through the same process? On a recent episode of the Inquiring Minds podcast, host Indre Viskontas and guest host Stephanie Lepp, of the Reckonings podcast, spoke with him about his transformation.

In 1988, Dr. James Hansen testified before Congress that our planet would see dangerous and substantial warming. By the early 2000s, Taylor had incorporated that testimony into an elevator pitch for why we shouldn’t be worried about a warming planet. “It’s been more than a decade since Dr. Hansen testified,” he would say, “and we’ve seen far less warming than he argued.” This argument became part of the reliable playbook for climate change skeptics.

One day, after debating climate science with Joe Romm, a climate expert, on television, Romm urged him to reread Hansen’s 1988 testimony—which he did. Taylor was confused; everything seemed correct. He decided to ask a climate skeptic scientist what he might have overlooked.

“For 20 minutes, the scientist in question kind of hemmed and hawed and spun and was kind of dodging,” Taylor said in the interview with Lepp. “It turns out I wasn’t overlooking anything.”

And thus began Taylor’s journey from climate skeptic to climate change believer. “From that point forward, I began to do the due diligence,” Taylor said. When he reviewed the studies by climate skeptics, he found that the story would often play out the same way. “Either the studies were misrepresentative, or they were cherry-picking data,” he said, “or they were just not very good.”

Taylor got to the point where he was uncomfortable arguing about the climate science but believed that the argument about the unacceptable economic costs of climate action still held. Upon closer scrutiny, that argument fell apart as well. “I got to the point where I could not find a credentialed economist who would argue against climate action,” he said. “Not a single one.”

What happens when a climate skeptic switches teams? For Taylor, coming forward to say that climate change is real and not “a conspiracy cooked up by leftists who want to destroy capitalism” was “a strong cup of tea” for his old friends to drink.  Taylor left the Cato Institute in 2014 and is now president of the Niskanen Center, where he promotes climate change action through market solutions and tries to turn deniers to believers. His brother, James Taylor, works at the Koch brothers-funded Heartland Institute, a conservative think thank leading the charge on global warming denial. The brothers agree to disagree on climate change and don’t discuss it.

Taylor is the only known paid skeptic to change his tune. “Most people aren’t in the business of looking skeptically at things they already agree with,” he said. “I wish I had done the due diligence with the arguments I was trafficking earlier in my career; I do regret that. I feel I have a lot to make up for.”