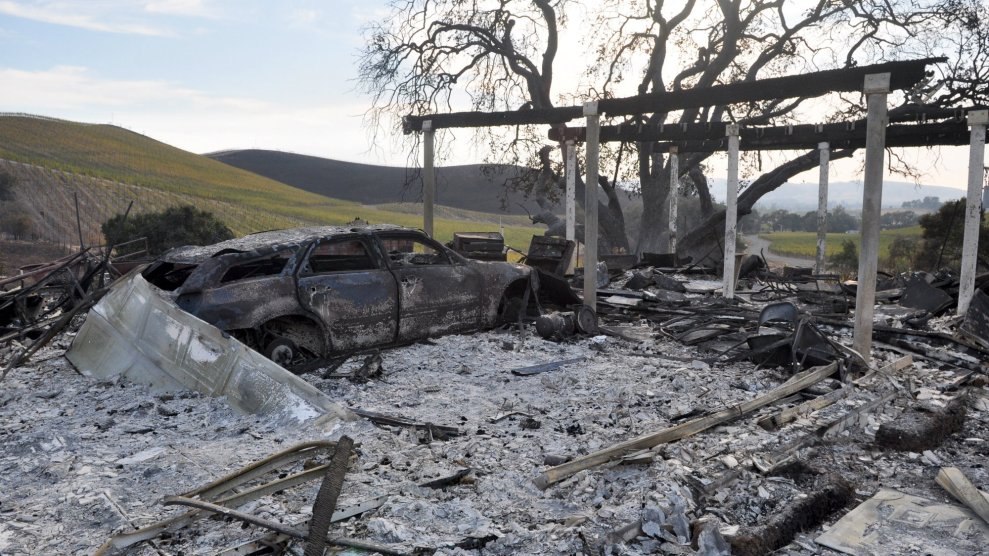 By any measure, the fires that tore through Northern California were a major disaster. Forty-two people are dead, and 100,000 are displaced. More than 8,400 homes and other buildings were destroyed, more than 160,000 acres burned—and the fires aren’t all out yet.

That devastation leaves behind another potential disaster: ash. No one knows how much. It’ll be full of heavy metals and toxins—no one knows exactly how much, and it depends on what burned and at what temperature. The ash will infiltrate soils, but no one’s really sure how or whether that’ll be a problem. And eventually some of it—maybe a lot—will flow into the regional aquatic ecosystem and ultimately the San Francisco Bay.

That’s the bomb. Here’s the timer: An old, grim joke about California says that the state has only three seasons: summer, fire, and mudslides. Those mudslides happen because of rain; the Santa Ana (or Diablo, if you’d prefer) wind-driven wildfires of autumn give way to a monsoon season that lasts through winter and into spring. The rains of 2016–2017 ended a longstanding drought and broke all kinds of records.

Scientists and environmental health agencies know, mostly, what to expect from ash that comes from burned vegetation. But these fires included something a little new. They burned through the wildland-urban interface and into cities. “For how many structures that were burned in fairly small areas in these fires, I think that’s a first-of-its-kind event,” says Geoffrey Plumlee, associate director of environmental health for the US Geological Survey. “The concern is, can they get it cleaned up before the heavy rains come?”

“For how many structures that were burned in fairly small areas in these fires, I think that’s a first-of-its-kind event. The concern is, can they get it cleaned up before the heavy rains come?”

Chemically, ash is fascinating. If the fire that made it burned at lower than about 840 degrees Fahrenheit, it’ll be darker-colored, maybe even black, and mostly organic carbon. At higher temperatures the carbon burns away, leaving inorganic compounds of stuff like calcium, magnesium, and sodium, and it’ll be whiter and fluffier. Even hotter fires, like above 1,100 degrees, leave nothing but oxides. Inside a single fire, combustion happens at different temperatures in different places, and because ash is so light, wind can transport it, so the composition of ash from the same fire can vary.

So depending on how combusted the ash is, it’ll have different chemical compositions. And that’ll mean the ash will mix either better or worse with underlying soil. Water won’t stick to more hydrophobic ash, so rainfall might run off faster, carrying away the surrounding soil as sediment. More hydrophilic ash might mix into the water and wash into nearby streams.

Now, carbon is the backbone element of organic systems. Having some flow off of burned hillsides and into aquatic ecosystems isn’t necessarily bad. It’ll increase what’s called “primary productivity,” allowing algae to reproduce, which means more food for fish. “Naturally occurring, lower-severity fires can have positive impacts,” says Kevin Bladon, a forest ecohydrologist at Oregon State University. The fires free up organic carbon and put nutrients like nitrogen and phosphorous into play. “But the really large, high-severity megafires that we’ve started to observe push the systems in a lot of cases too far.”

That means dangerously large algal blooms, so-called eutrophication that can eat all the dissolved oxygen out of a waterway, making it unlivable for everything else. Sediments freed up by the hydrophobic ash end up making water more turbid—bad for people if that water’s supposed to end up coming out of someone’s tap, and bad for fish because sediment can gum up feeding and breeding grounds.

The problem’s getting more familiar as an after-effect of fires ranging from Australia to Canada to the US. Climate change makes fires and storms more severe. As one of Bladen’s papers notes, the 2002 Hayman Fire in the Colorado Rockies sent 765,000 cubic meters of sediment, ash, and other stuff into Denver’s drinking water reservoirs, and the problems were still there four years later. “We’re anywhere from five years to 100 years in terms of the longevity of effects,” Bladon says. “That really depends on the severity of the fire and our ability to get some vegetation re-established on site.”

It gets even weirder. At high enough combustion temperatures, compounds like potassium carbonate and calcium carbonate turn to oxides. Given the right amount of light rain, calcium oxide—quicklime—slurps carbon dioxide out of the air and forms a crust of essentially cement, limestone. Basically, the ash can pave a forest. “If you had the perfect situation, you can really change a watershed with increased runoff,” says Victoria Balfour, a post-fire hydrologist.

There’s more. Combustion byproducts called polycyclic aromatic hydrocarbons and cancer-causing dioxins can all be part of ash. In older forested land that hasn’t burned in decades, pollution may have deposited heavy metals like copper, lead, aluminum, arsenic, and even mercury onto the plants. When the plants burn, the metals stay behind, or run into waterways. The 2009 Station Fire northeast of Los Angeles increased levels of iron, manganese, and mercury in nearby streams … and the storms that followed soon after brought elevated levels of copper, lead, nickel, and selenium.

What makes these latest Northern California fires unique, though, is that they burned not just forest wildland but also cities. And the built environment burns differently. It gets hotter, and it leaves behind different remains. “All of a sudden you’ve got a lot of impervious surfaces,” Bladon says. “Water hits it and flows over. If there are burned materials sitting on the roads, that’s going to move very rapidly into waterways. We have no handle on that at all.” Ash science isn’t much more than a decade old; understanding urban ash science has never really been a necessity—but now megafires are coming to cities.

“All of a sudden you’ve got a lot of impervious surfaces, water hits it and flows over. If there are burned materials sitting on the roads, that’s going to move very rapidly into waterways. We have no handle on that at all.”

What’s in that ash depends on how old the buildings are. Pre-1980, the paint will be full of lead. Even more recently, pressure-treated lumber used in landscaping was full of chromate copper arsenate, which leaches arsenic and hexavalent chromium—bad for fish and other living things. “On the good side, there are probably fewer lead phosphor TV screens. There’s a lot more flat screens,” Plumlee says. “There are more LED light bulbs and hopefully fewer fluorescent and compact-fluorescent, which have a concern with mercury. Copper and zinc are also commonly used in building materials.”

All of which means the real trick in Northern California will be debris cleanup. The US Environmental Protection Agency, California’s EPA, the Army Corps of Engineers, and other agencies and NGOs are all onsite—spinning up as a Watershed Protection Taskforce. They’re evaluating the debris and getting it ready for collection—a job done most safely wearing gloves, a Tyvek bodysuit, and an N95 respirator.

Drinking water for the region hasn’t been compromised—it comes from farther north than the fires—but the Napa and Sonoma Rivers (and the associated stream systems) empty straight into San Francisco Bay. “We cherish our creeks and streams, and there’s uncertainty in regards to what may be in all this ash,” says Bennett Horenstein, director of Santa Rosa Water. “So there’s a lot of activity to do everything we can in a thoughtful and safe way to protect the ecosystem.”

Stormwater typically doesn’t get treated, so the inlets in Santa Rosa have gotten barrier protection installed. “We’re all recognizing that this disaster was of such magnitude, the organization is unfolding,” Horenstein says. “But it does seem to be unfolding in a thoughtful, structured way.”

The Regional Monitoring Program for Water Quality already watches what’s in the San Francisco Bay besides water. Some of its scientists now have a proposal to monitor the Napa River for what water watchdogs call “contaminants of emerging concern.” The field is new enough that they’re not even sure what they’re looking for yet—they’re going to use “non-targeted analysis” to look for anything unexpected. The San Francisco Estuary Institute already monitors dioxins, PAHs, metals, and other stuff in the bay, but only annually or semiannually.

That’s probably not fast enough. The ash is on the ground. “Getting through the entire area will take some time,” Horenstein says, “and we’re approaching the wet-weather season. There’s a small storm forecast for next week.” ‘Tis, after all, the season.