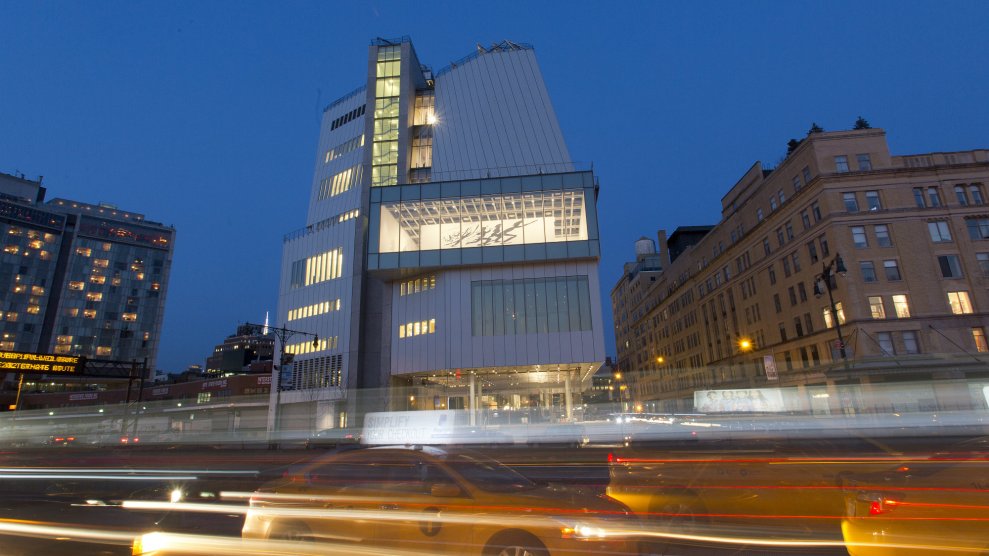 When Superstorm Sandy ripped through New York City in October 2012, it did not discriminate. At the construction site of the new Whitney Museum of American Art, chief operating officer John Stanley recalls “mechanical equipment bobbing like corks” in the floodwaters. And at the Rubin Museum of Art, a few blocks uptown, and upland, the museum lost power—a necessity for preserving the artifacts from environmental damage—and the backup generators weren’t enough to keep the facility running. “We thought if we do lose power, in the history of New York City, it would be for a day or two,” executive director Patrick Sears says. “No one really anticipated we could go without power for a week.”

But as once-rare storms like these become more common and more consequential (Sandy caused an estimated $70 billion in damage, behind only Hurricane Katrina), coastal communities are reorienting to a world where they might be underwater at a moment’s notice. And museums are leading the charge when it comes to bolstering up in the face of extreme weather—after all, financially speaking, they might have the most to lose. Along the Eastern Seaboard, from Miami to Manhattan, curators are going to extremes to safeguard their art. And in doing so, they’re testing out ideas and processes that might later be adopted by everyone else who lives on the coast.

Looking back, Stanley says the timing of Superstorm Sandy was actually fortuitous for his museum, the Whitney. Because it was early enough in construction, the team was able to revise its plans with water in mind. “We searched the world for flood experts and engineers,” he says. With the help of WTM Engineers in Hamburg, Germany, the Whitney design team re-evaluated the entire site and, as the Atlantic reported in 2015, built one of the most flood-resilient structures in town.

As a result of lessons learned in Sandy, the museum is waterproof up to 16½ feet thanks to its raised elevation and carefully selected materials. It’s also got walls galore: A 500-foot-long mobile wall can be constructed in less than seven hours to protect the museum from a storm surge’s impact, and a 14-by-27-foot flood door can withstand the force of a semitruck floating (or flung) across the West Side Highway. Stanley says it cost just $10 million more to disaster-proof what was, in total, a $220 million project. And though the safeguards haven’t been tested the hard way, he’s confident they’ll rise to the occasion if—or rather, when—another disaster unfolds.

Some museums farther south on the Atlantic seaboard have already lived to see their hurricane-resistant designs tested by storms. Employees at the Salvador Dalí Museum in St. Petersburg, Florida, recently weathered Hurricane Irma with little damage. Back in July, a videographer for the Washington Postfilmed inside the “surreal shelter from the storm.” To protect the precious collection, the Dalí relies on 18-inch-thick walls, which are built to withstand the winds of a Category 5 storm, and fortified glass, which can hold up under the pressure of Category 3 winds. As with so many other museums, the Dalí’s decision to gird its infrastructure seems financially sound: If its walls were breached, the largest collection of Salvador Dalí paintings in the world, priceless and carefully preserved over the past century, could be lost in an instant.

If its walls were breached, the largest collection of Salvador Dalí paintings in the world, priceless and carefully preserved over the past century, could be lost in an instant.

The architectural features that make the Whitney, Dalí, and similar spaces so safe have recently begun to proliferate far and wide, thanks in part to consumer demand and new municipal standards. Perhaps the purest emblem of this surge-priced survival model is the new residential American Copper Buildings. Like the Whitney, these structures sit in Evacuation Zone 1, but on Manhattan’s eastern shore. While it seems damage from another hurricane is all but guaranteed, the waiting list for a unit in one of the American Copper towers is long.

That’s due primarily to the fact that the $650 million buildings, which were started before Sandy hit, reportedly go beyond even the city’s newest resilient design codes—and look great doing it. Connected by a three-story skybridge, the two towers have an elevated lobby that makes them virtually waterproof. The building is also served by rooftop backup generators that promise enough energy to run the elevators plus one fridge and one electrical outlet in each apartment indefinitely. In January, the New York Times wrote this glowing report:

There is a breathtaking view of the mid-Manhattan skyline, pierced by the Empire State Building, from the 48th floor of the taller of two new copper-clad apartment towers along the East River, just south of the United Nations.

No plutocrat will enjoy it, however. This impressive penthouse aerie is hogged by five emergency generators. The window is already blocked by a bank of electrical switchgear. For the developers, giving up premium space to machinery is insurance against an ominous future: They want tenants in the towers’ 760 apartments to be able to live in their apartments for at least a week, no matter how high floodwaters may reach nor how long the power is out.

Sure, in the face of an impending storm, residents will still have to get the hell out just like any other New Yorker adhering to evacuation mandates. But American Copper promises them a return to a clean, safe, and electrified home.

Though JDS Development Group, which owns American Copper Buildings, may have been leading the charge on resilient design, the rest of New York City’s new construction is quickly catching up. After Sandy, the Mayor’s Office of Recovery and Resiliency set about studying the metro area’s weather and climate vulnerabilities and crafting solutions. Recently, the city began implementing new building codes, and all new construction is now held to these updated resiliency standards. “We’re not just doing one-off resilience projects. We’re baking resilience into the entire capital program,” the city’s chief resilience officer Daniel Zarrilli says.

Even with the support of the city, resilient design can be hard to scale. Retrofitting old buildings is harder than raising more capital to bolster new designs, according to many architects. Raising an existing single-family home on stilts, as many thousands of East Coasters have done since Sandy, can cost more than $100,000—on a house that’s maybe only worth $400,000. That means that while the Whitney’s resilience costs were less than one-twentieth of the new project cost, the owner of an existing home is looking at resilience costs as high as one-fourth of their total property value. While some local and federal support has been made available to storm victims, the costs of these programs have quickly ballooned—even after many withdrew their applications due to overwhelming bureaucracy and out-of-date flood maps.

It’s clear that equitable resilience will take not just effort and money, but time. “There will just be a slow changeover of the entire housing stock in New York City that slowly meets these codes,” Simon Koster of JDS Development Group says. Given that 66 percent of New York City’s buildings were built before 1960 and aren’t likely to change over in the near future, this doesn’t seem particularly hopeful.

But other less intensive measures are being taken to ensure New Yorkers weather the next storm—and museums can serve as a model here, too. The Rubin, which showcases art from the Himalayan region, didn’t have the budget to undertake big post-Sandy capital improvement projects. While the board paid for a few big-ticket items like a stronger, waterproof roof, it’s poured most of its efforts into better training and communication. “We’re thinking about manual ways, simple ways, things you can buy on Amazon,” Sears says. One of his favorite investments is a windup cellphone charger that doesn’t require an electricity source.

Unlike 18-inch concrete walls, disaster plans like these can be constructed by anyone. But a 2015 Federal Emergency Management Agency survey showed only 39 percent of Americans have their own plan in place. The Rubin, which has a disaster plan 153 pages long, believes this has to change. Other museum strategists agree: “You can call it paranoia, or you can call it strategy,” says Kathy Greif of the Dalí Museum. “I prefer to call it strategy.”

If museums are so prepared, could they help the rest of us—literally? Not really. Unsurprisingly, you won’t be weathering the next hurricane from inside the Met. Though all of the museum leaders I spoke with agree that human lives matter more than paintings, serving as a shelter still seemed to compromise their central mission, which is protecting their collections. Even if it could theoretically provide reprieve, the Whitney sits on the leading edge of Evacuation Zone 1, which means people should be headed out of the neighborhood, not into even the most disaster-proof buildings. The Rubin, meanwhile, wouldn’t physically have the space to serve as a shelter during a flood, as art typically hung in lower-level galleries would be moved into many of the hallways and upper galleries. In the end, its strategies like these that will save the precious artwork. But it’s clear they’ll limit room for, well, people.