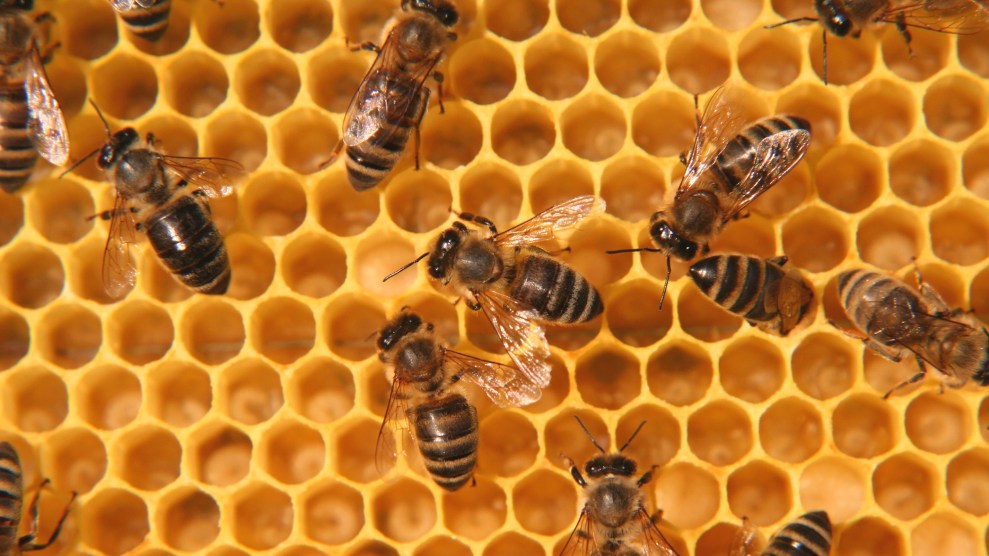 The last taste of honey you enjoyed likely came from bees exposed to neonicotinoids, the world’s most widely used class of insecticides.

Scientists found traces of the bug-killing chemicals in 86 percent of the samples from North America.

That’s the takeaway from a paper, published last week in the journal Science, by a team of Swiss researchers. They found traces of the bug-killing chemicals in 75 percent of honey samples drawn from around the world—and 86 percent of the samples from North America.

For human honey eaters, there’s probably nothing to worry about. The authors report that in all of the tested samples, the levels found were “below the admissible limits for human consumption according to current EU and U.S. regulations.” (They note, however, that while neonics are generally considered relatively benign to humans, there has actually been very little peer-reviewed research on the topic. This recent analysis from George Washington University professors underscores that point.)

But for honeybees—which for about a decade have been suffering steep annual winter and (more recently) summer die-offs—the new findings are troubling, full stop. The Swiss team points to a burgeoning body of research showing that even at tiny doses, neonics burden bees with “growth disorders, reduced efficiency of the immune system, neurological and cognitive disorders, [impaired] respiratory and reproductive function, queen survival, foraging efficiency, and homing capacity.”

Neonics are produced primarily by the Swiss/Chinese agrichemical titan Syngenta and its German rival Bayer, which is currently in the process of merging with Monsanto. The companies vigorously deny that their blockbuster insect-killers do any harm to bees and other pollinators, but research to the contrary is piling up.

In its June 30, 2017, issue, Science published two papers that, it concluded, “confirm that neonicotinoids negatively affect pollinator health under realistic agricultural conditions.” In one, a Canadian team found that bee hives near neonic-treated corn fields showed “increased worker mortality and were associated with declines in social immunity and increased queenlessness over time”—and fared even worse when they those corn fields were also sprayed with a commonly used fungicide. In the other, a UK team documented health declines in both honeybees and wild bees near treated fields in three countries.

Corn treated with neonics did not grow any faster or deliver higher yields than untreated corn—meaning that the damage to honeybees was not offset by any advantage to corn farmers.

And in a May 2017 paper published in the Journal of Applied Ecology, a team of researchers led by Purdue University entomologist Christian Krupke found that in the corn-heavy state of Indiana, 94 percent of the state’s honeybees are exposed to neonics during the corn-planting season. They also found that corn treated with neonics did not grow any faster or deliver higher yields than untreated corn—meaning that the damage to honeybees was not offset by any advantage to corn farmers.

That finding echoes a 2014 conclusion by the Environmental Protection Agency about soybeans. The EPA has since removed the paper from its website, but I quoted its conclusion at the time: “There are no clear or consistent economic benefits [to farmers] of neonicotinoid seed treatments in soybeans.”

Yet as the new Science paper on honey shows, neonics are ubiquitous in the environment on a global scale. The authors note that honey bees are “distinctive sentinels of environment quality,” because they gather nectar and pollen from as far away as 12.5 kilometers (7.7 miles) from their hives. What shows up in their honey is a “measure of the contamination in the surrounding landscape”—and this neonic news is anything but sweet, given that the chemical are suspected of harming not just honey bees, but also wild bees, birds, and aquatic insects.