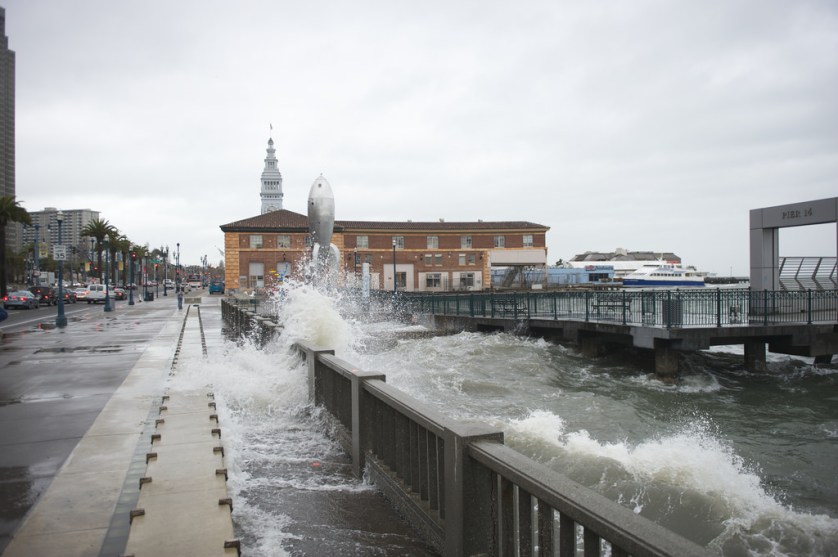 On a Tuesday morning in October, just before noon, the San Francisco port is bustling with life. Shoppers line up for late summer produce and specialty coffee at a farmer’s market in front of the iconic Ferry Building, and suited professionals settle on benches near the water to enjoy their lunches. It’s unlikely that many of these daytime revelers realize that they are just a few feet from the seawall: a critical barricade protecting San Francisco from the looming impacts of climate change, and an accessory in a lawsuit that’s demanding oil companies pay for these impacts.

Executive Director of the San Francisco Port Elaine Forbes, who has just switched from high-heels to walking shoes for our stroll, points to the crowd. “There’s 24 million people that come and go, use the seawall, and have no idea that it’s that core infrastructure that makes for this beautiful place.”

Forbes leads me around the Ferry Building, walking along the water towards the San Francisco–Oakland Bay Bridge to show me what’s at stake. The six-foot-tall seawall, which sits just below the cement we’re standing on, took nearly four decades to construct and was completed in 1916.

But more than a century later, the wall is badly in need of updates. And because of warming oceans, sea levels are expected to increase up to 66 inches between 2000-2100. Strengthening the wall has become the port’s top priority in light of this threat (as well as the potential for a large projected earthquake). The upgrades—which include an estimated $3 billion in sea level rise mitigation and $2 billion in earthquake retrofitting—will come at a huge cost to the city.

“Right now, we have zero construction dollars,” Forbes says. To amass the funds, the city and the port are planning ballot initiatives and working with the US Army Corps of Engineers, which might chip in.

Meanwhile, the city attorney’s office has decided to try a new approach. On September 19, San Francisco filed suit against five of the nation’s largest oil companies demanding they pay for the updates the city needs to protect its residents against climate change. The suit, filed in San Francisco County Superior Court, argues that the corporations—Chevron, ConocoPhillips, ExxonMobil, Shell, and BP—promoted fossil fuels as “environmentally responsible and essential to human well-being” amid multiple warnings that the planet was in danger.

The lawsuit cites a slew of examples alleging that the oil companies continued promoting their product when they knew it would harm the environment. A 1968 Stanford Research Institute report, for example, warned the American Petroleum Institute and its members (which includes all of the defendants) that sea level rise and changes to the earth’s environment were almost certain. “There seems to be no doubt that the potential damage to our environment could be severe,” the report reads.

“They made a choice to pursue a business strategy for their profit motive,” San Francisco City Attorney Dennis Herrera says. “Now they’re going to have to pay.”

Will a lawsuit like this ever prevail? Herrera points to a case in Santa Clara County Superior Court, where a group of California cities and counties, including San Francisco, are suing colossal paint companies like Sherwin-Williams to hold the manufacturers responsible for cleaning up lingering lead toxins in homes. They won a $1.1 billion judgment in 2013 that the paint companies are now appealing. “That’s a good example of why I think our legal strategy is a good one,” Herrera says.

But the lead paint case has been in the court system for more than 15 years. The oil company lawsuit could easily take a decade to wend through proceedings—which is why the port is keeping its options open. “It would be great if something came out of the lawsuit that we could deploy to our seawall,” Forbes says, “but we’re a ticking time bomb.”

In the event of a victory, however, the legal strategy could serve as an example for other cities hoping to go after big oil to pay for their own environmental woes. This case is one of five currently underway. The City of Oakland filed a suit similar to San Francisco’s last month. And two coastal California counties and a city each submitted a suit in July against the same 37 fossil fuel giants charging them with the bill for damages related to sea level rise.

“Chevron welcomes serious attempts to address the issue of climate change, but these suits do not do that,” the company said in response to San Francisco and Oakland’s cases.

Though the port’s vulnerability and risk assessment has estimated the port needs billions to renovate the seawall, Forbes is unsure what that upgrade will look like. “We don’t have a conceptual design,” she explains. “We’re at the beginning of this project.” But the consequences of climate change are already affecting the area, as increased nuisance flooding and high tides have prompted the city to close nearby streets in recent years.

“Climate change is accelerating the rate at which oceans are rising and our lower-lying shoreline areas are increasingly exposed to flood waters,” San Francisco Mayor Ed Lee stated in the city’s Sea Level Rise Action Plan, which was completed in March 2016. While the lawsuit does not demand a specific dollar amount, the plan reports that failing to prepare for rising seas could ultimately cost the city $35 billion in public property loss by 2100, and an additional $20 billion in private property.

Walking back towards the Ferry building, passing by Pier 14, Forbes points to the water crashing up against the cement railing between us and the sea. “When we built Pier 14…we didn’t have water like this,” she says. “This is a mess.”