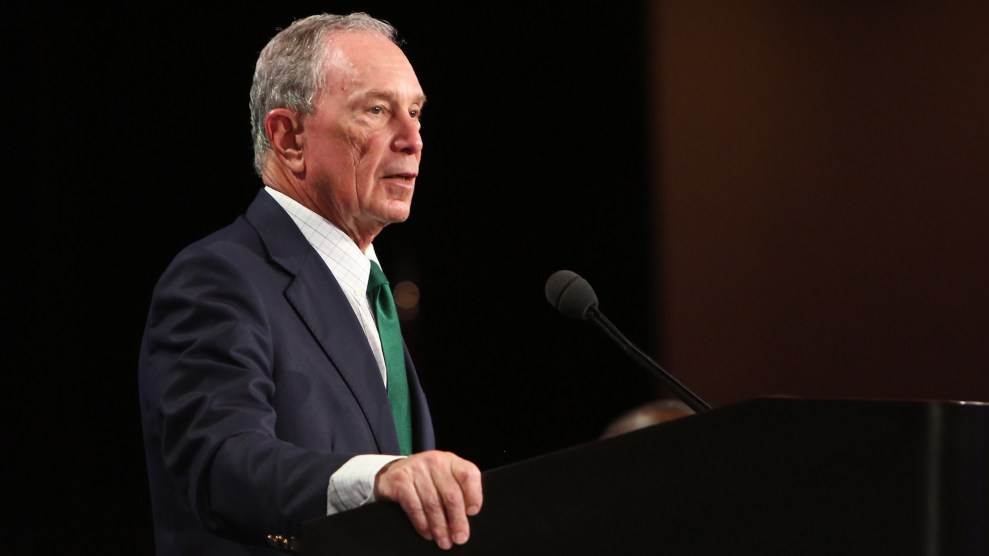 The day after the Environmental Protection Agency took its first formal step towards repealing the Clean Power Plan, a 2015 Obama administration rule that was the only federal regulation limiting carbon pollution from the nation’s power plants, environmentalists hit back. On Wednesday, former New York City Mayor Michael Bloomberg pledged $64 million to a coalition of environmental groups, with the bulk of it going to Sierra Club’s Beyond Coal campaign.

“The war on coal has never been led by Washington,” Bloomberg said at Sierra Club’s Washington, DC office. Instead, he noted, it’s been led by market forces and activists fighting off fossil fuels in their communities. “While repealing [the Clean Power Plan] is a mistake, the truth of the matter is we’re already making great progress eliminating pollution from power plants, and we’re going to keep doing it without leadership from Washington.”

“Coal is in irreversible decline, because it’s too expensive for utilities and investors, and it’s too dirty for the public.”

The Clean Power Plan never actually went into effect; the Supreme Court halted implementation of the plan in 2016, before any of the new rules had been enforced. But even without those rules, the coal industry was already winding down.

In the last seven years, 259 coal-fired power plants have shut down or announced plans to retire, accounting for nearly half of the nation’s coal plants. A plant closed on average once every 11 days during that time. The Clean Power Plan aimed to cut coal pollution from the power sector by about a third by 2030. Even without it, the US is already halfway to that goal. According to a recent Rhodium Group analysis, the Clean Power Plan would have forced an additional 12 to 21 states to move away from coal beyond market trends (the number varies depending on those market trends).

Activists hope to step in where federal climate policy now lags. Sierra Club’s campaign aims to retire 65 percent of the nation’s coal-fired plants by the end of 2020. Sierra Club plans on using the same tactics they’ve deployed for the past seven years: Making the case on the local level that shutting down coal will save Americans money and clean the air and water.

But Trump has a few tricks up his sleeve as well. For instance, the president may be about to slap new tariffs on the solar industry, which environmentalists worry will stifle solar’s growth and possibly make coal more competitive.

Still, Sierra Club Executive Director Michael Brune noted some hopeful trends. “Coal plants are retiring at the exact same rate as they were under President Obama,” said Brune. Ten coal plants have shut down in since Trump’s inauguration. “Coal is in irreversible decline,” Brune said, “because it’s too expensive for utilities and investors, and it’s too dirty for the public.”