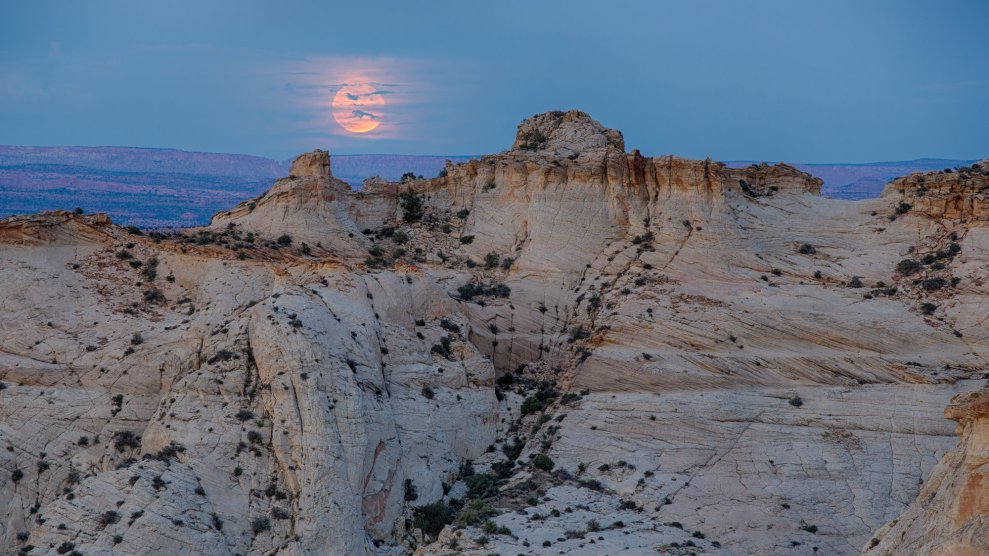 Environmentalists and scientists were rattled last week following a report that President Donald Trump plans to scale back two of southern Utah’s national monuments. Not only would the project endanger sacred Native American sites and breathtaking Western vistas open to the public — but also some of the most important dinosaur fossils in the world.

Scientists worry that removing the land from federal protection and opening it up to coal mining will jeopardize critical fossils in the 1.9 million-acre Grand Staircase-Escalante National Monument.

“My fear is that opening up the monument to energy extraction will threaten our ability to uncover the secrets that we know must still be buried in the monument,” Canadian paleontologist Scott Sampson told the Los Angeles Times.

In a phone call Friday with Sen. Orrin Hatch (R-Utah), Trump reportedly said he planned to follow the recommendation of Interior Secretary Ryan Zinke to shrink the size of Grand Staircase-Escalante and the 1.2 million-acre Bears Ears National Monument, which could be reduced more than 90 percent. Carved-out areas would be open to both mining and oil drilling.

The decision is part of a review of monuments across the nation.

Zinke’s recommendation would open up the Kaiparowits Plateau in the Grand Staircase, which includes an incredibly rich collection of dinosaur fossils dating to the Cretaceous.

Earlier this month, a nearly complete fossilized skeleton of a 76 million-year-old Tyrannosaurus was airlifted from the plateau for further study at the Natural History Museum in Salt Lake City.

The remarkable find — with many bones frozen in life-like movements — was discovered two years ago. It’s the most complete Tyrannosaurus fossil discovered in the American Southwest. Researchers believe it may be a rare fossil of the Teratophoneus curriei, a relative that predated the T. rex and stood about 12 feet tall.

Digs in the area have also uncovered other important fossils of unusual or new species of dinosaurs, like the duck-billed Crested Hadrosaur, horned Ceratopsians and the dome-headed Pachycephalosaur.

“These are things found only in Grand Staircase,” Randy Irmis, the paleontology curator at the Natural History Museum, told The Salt Lake Tribune. “These are world-class paleontological resources.”

“It’s one of the last places where you can almost predictably come out and make new scientific discoveries year after year.”

Paleontologist Alan Titus, who discovered the Tyrannosaurus fossil, described the Kaiparowits Plateau as a 5,000-foot-thick “sequence of rocks that records the life and times of the dinosaurs during their swan song, the end of the age of dinosaurs” between 100 and 75 million years ago.

“The monument tells a story to scientists” about an ancient North American ecosystem “that we can’t see anywhere else,” he told The Los Angeles Times. “It’s one of the last places where you can almost predictably come out and make new scientific discoveries year after year.”

The Grand Staircase has been federally protected since it was declared a monument 21 years ago by then-President Bill Clinton. “The empty spaces are filling up in the West. We have to imagine what the western landscape is going to look like in 50 years and try to anticipate, rather than wait for conflicts to happen,” Clinton said when he designated the area a monument.

No president in history has shrunk a national monument since the law creating the public lands — the Antiquities Act — was passed over a century ago in 1906.

Trump plans to travel to Utah in December to officially announce his decision to carve out sections of the Utah monuments, which is likely to trigger an immediate court challenge.

A video ad released Thursday by the National Wildlife Federation features Navajo Nation delegate Davis Filfred, who has spoken out against changes to the Bears Ears monument. In the video, he pleads with the president to leave national monuments intact.

“Not all monuments divide us. Some bring us together,” Filfred said. “If you destroy these monuments, our public land could be auctioned off. Our sacred tribal sites would be in danger.”