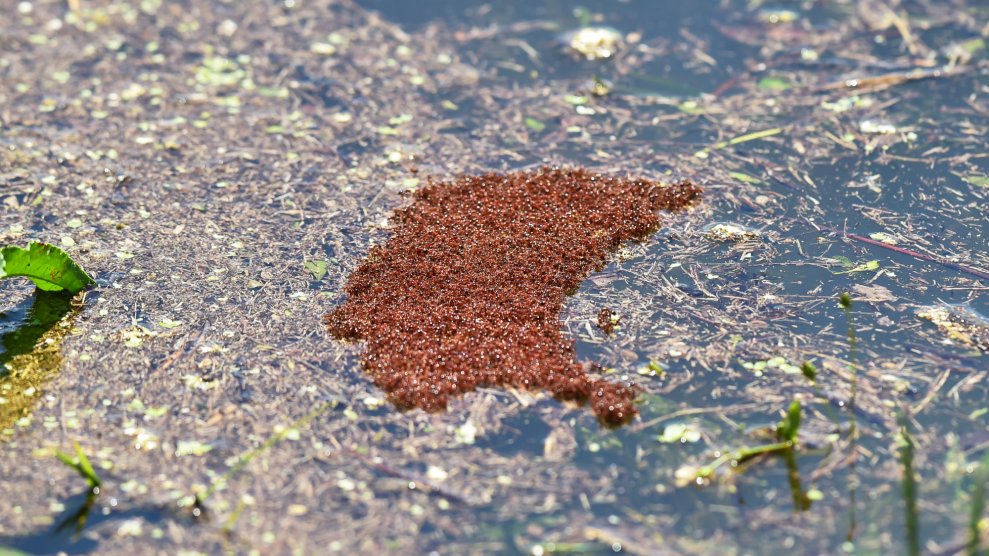 As if the catastrophic floods in Houston haven’t done enough damage, people are now reporting large colonies of fire ants floating on the rising water.

These fire ants, which are infamous for their painful bites, appear to have an outrageous survival mechanism. And, frankly, it’s unsettling.

Individual fire ants have a slight resistance to water, but that resistance becomes much stronger when they work together. Colonies will link together to stay afloat even in the severe flooding Texas is experiencing.

“They use the wax together on their bodies to keep the queen and other members of the colony in the middle of the ball dry so they don’t suffocate,” Mike Merchant, entomology specialist at the Texas A&M AgriLife Extension Service, told Wired. As they float along, the insects change their positions within the pack to help prevent drowning.

People are thoroughly disturbed by what Mother Nature hath wrought.

What fresh hell is this

It looks like dirt, but it's ACTUALLY FUCKING ANTS. GODDAMN HARVEY COULDN'T YOU AT LEAST KILL THE FUCKING FIRE ANTS? #HurricaneHarvey pic.twitter.com/3zQMTtq9f3

This is why you don’t dork around in flood waters. Floating pile of fire ants from a local retention pond #Harvey pic.twitter.com/MwFQmfrP38

Oh, look-it's all of my childhood nightmares wrapped into one video. Thanks, internets.

I almost died from looking at this.

Floating fire ants aren’t a particularly new phenomenon, but that doesn’t make it any less horrifying.

Have a little mercy, won’t you, Mother Nature?