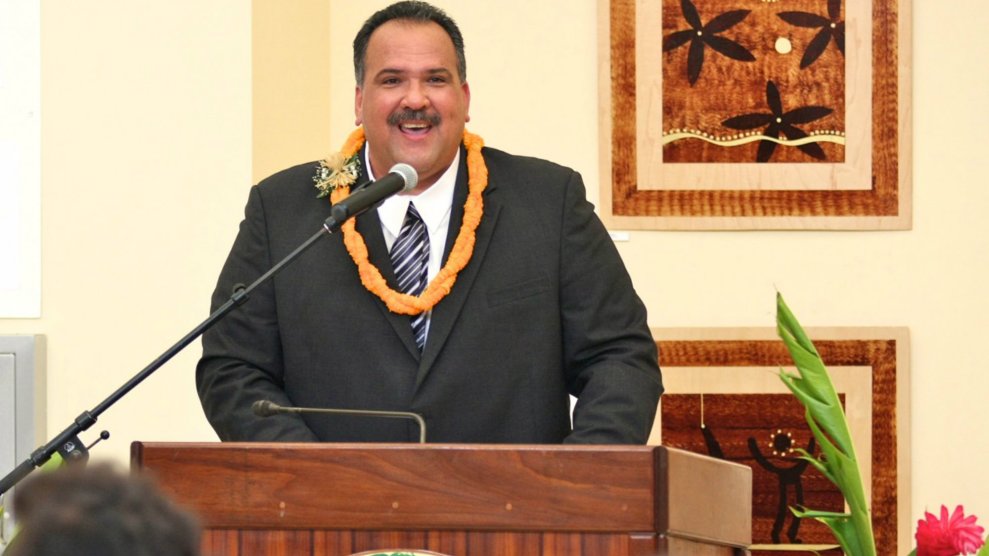 Bernard Carvalho might be the least jaded politician in the United States of America right now.

True, it might not seem too hard to keep a sunny disposition when you’re the mayor of a laid-back Hawaiian island that runs on tourism and surfing—especially one that’s making the transition to clean energy faster than just about anywhere else in the country.

But when President Trump made the announcement that he would pull the United States out of the Paris Climate Accord—an international agreement backed by 194 countries, with the goal of forestalling disastrous levels of global warming—Carvalho knew he had to do something.

A 6-foot-5-inch former NFL guard, Carvalho threw his weight behind the international agreement. In early June, Kauai’s mayor joined Hawaii Governor David Y. Ige and other Hawaiian state and county officials to independently sign support for the agreement, making Hawaii the first state to enact laws enforcing the treaty’s commitments in their own communities.
“I’m always telling my team, we’re on the 10-yard line! You gotta pass that ordinance or pass that policy, because climate change is coming!”

“Now, in football terms—sorry,” he interrupts himself, laughing, “it’s just how it is! I’m always telling my team, we’re on the 10-yard line! You gotta pass that ordinance or pass that policy, because climate change is coming!

“And a field goal is unacceptable, by the way,” Carvalho adds. “Only a touchdown!”

Carvalho, part Hawaiian and part Portuguese, was born on Kauai. His heritage is the result of Hawaii’s once-booming sugar industry, which was powered by waves of Chinese, Portuguese, Filipino, Japanese, and Puerto Rican labor brought to work the plantations of the 1800s. The sugar plantations began to struggle in the second half of the 20th century, and the final lone plantation in the Hawaiian archipelago shut down in 2016.

In their wake, Hawaii has had to reinvent itself, making room for conservation and community initiatives, where before the state relied on international industry.

“I come from a background of, you know, growing up not having too much,” Carvalho says, “but being thankful. It doesn’t matter where you’re from, but you gotta have a positive attitude.”

Carvalho first ran for office in 2008, after the previous mayor, for whom he worked directing transportation and housing initiatives, died halfway through his second term. An affable and charismatic speaker, the Democrat was elected by a wide margin three times.

At the start of his first full term in 2010, Carvalho opened his inaugural address with a vision of a better, more livable Kauai, which he branded as Holo Holo 2020. It laid out the top priorities for the community, from economic resilience to environmental sustainability, and identified 38 projects to carry out. That included installing crosswalks, photovoltaic panels, transit infrastructure, and EV charging stations.

“A lot of this came from my going out into the community. I like to go visit people,” he says. “From these meetings came these 38 projects.”

Many are well underway, and several have been completed, including an upgrade to existing bus service and the extension of a pedestrian path that now stretches along the seashore between the towns of Kealia and Wailua. (You can see the complete list of projects here.) “All of it is tied into this bigger vision of honoring the land and the water and the environment,” Carvalho says.

In 2015, Kauai County was one of 627 applicants for a Transportation Investment Generating Economic Recovery, or TIGER, grant from the Department of Transportation. Carvalho and a team went to Washington, D.C., to pitch their project in person.

“We went in with our story and we left there with a $13.8 million Tiger grant,” Carvalho says. Kauai was one of 39 communities chosen to receive funding that year. The money would help Kauai expand public transit, build new bus stops, add sidewalks and bike paths, and invest in more affordable, sustainable housing.

As Carvalho nears the end of his final term, the changes are still rolling in. Downtown Lihue’s main drag is due for a total makeover. “You’ll see, when you come back again, our Rice Street, just out here, will transform into this whole walkable, bike-able, whatever-able, with transit stations, buses, all of it,” Carvalho says. The county also plans to double its own fleet of electric cars in 2018.

“Problem is, it’s too small,” the former football player says, laughing. “I can’t fit in it! But that’s OK.”

Although electric vehicles and car-sharing programs may be new, Carvalho says sustainability has always been a core value of Hawaiians. “They knew how important it was to keep the reefs healthy, making sure the food—the fish, the seaweed, the limu kohu, the life in the ocean—was there to feed our people.”

That deep-rooted Hawaiian belief in the right way to do things is what motivates Carvalho’s actions, he says. “It’s like the huki lau—it’s a cultural practice that strengthens community: You throw the net out, you pull the net in, and then you share the catch,” he explains. By working together, everyone can win. “See, that is the power of aloha.”