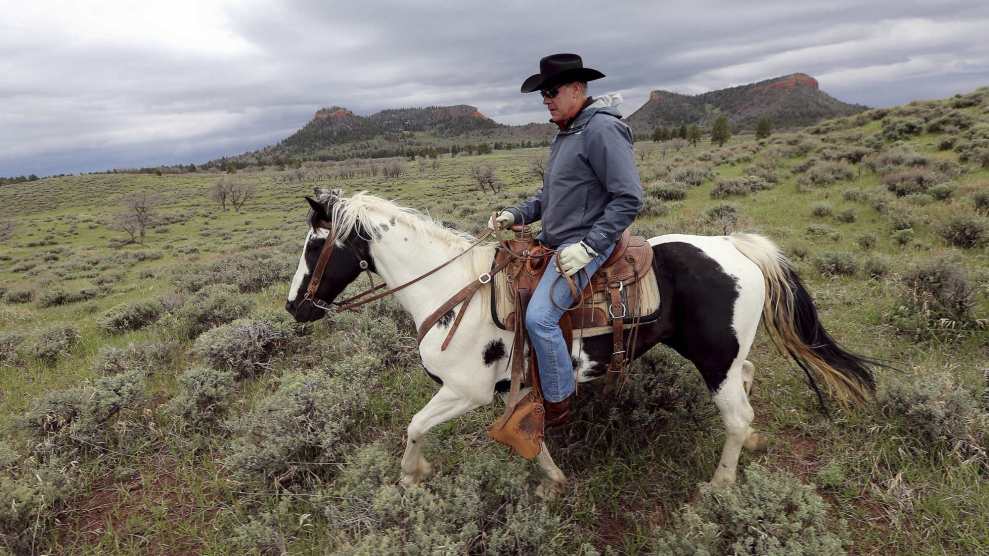 Interior Secretary Ryan Zinke is three months into a review of 27 national monuments to determine whether they should be shrunk, abolished or left intact. Zinke’s review comes as he continues to fill his department with pro-industry officials and amid a broader push at the Interior Department for increased energy development on public lands—something monument designations can work against.

A new website made public on Tuesday describes an Interior Department now mainly led by employees from extractive-industry backgrounds, marking clear priorities for Zinke that do not bode well for greater public land protections. The website, created by the Western Values Project, a progressive organization, shows close ties between high-ranking staffers and industry. Of the known political hires to the Interior thus far, 21 come from resource extraction industries, while only three are from “conservation, outdoor recreation, or hunting and fishing backgrounds,” says Chris Saeger, executive director of Western Values Project.

For example, Scott Angelle, now the director of Zinke’s Bureau of Safety and Environmental Enforcement, received donations from energy companies such as Chevron, Energy Transfer Partners (the company behind the Dakota Access Pipeline) and Occidental Petroleum Corporation, during political campaigns. In his new job, Angelle will inspect and regulate offshore oil and gas production. Several Interior appointees have worked for Americans for Prosperity, a far-right advocacy group funded by the Koch brothers, known for their support of fossil fuel industries. Deputy Interior Secretary David Bernhardt is a former lobbyist for oil, gas and mining interests, the report points out.

Kathy Benedetto, who recently worked for Bioxy Research, which provides “services for the oil and gas, refining and chemicals, mining, agriculture and construction industries,” is now a special assistant to the secretary of Interior. For 13 years, Benedetto worked for a subcommittee of the House Natural Resources Committee, chaired by Congressman Rob Bishop, (R-Utah). Benedetto is one of several new federal employees with ties to the Utah delegation—a group of lawmakers that has pushed to weaken conservation protections on public lands for years. A new hire at the Bureau of Land Management and Interior’s new deputy assistant secretary for land and minerals management also worked for House Natural Resources subcommittees under Bishop.

Kate Kelly, a former senior advisor at Obama’s Interior and now the public lands director at the Center for American Progress, says Bishop’s influence is beginning to take effect inside the Trump administration. “I think there are enough dots there that we can start to draw a line between the Utah delegation and their ideology and the Interior Department and what we’re starting to see come out of the agency,” she said in an interview. “[Bishop] is hostile to the concept of federal lands and the Antiquities Act. So the actions we’re seeing at the Interior Department take on that flavor.”

President Donald Trump even named Utah Sen. Orrin Hatch during the signing ceremony of the monument review: “[Hatch] would call me and call me and say, ‘You gotta do this.’ Isn’t that right, Orrin? You didn’t stop.” The president said he was ordering the monument review “in honor of” Hatch and Senator Mike Lee (R-Utah) who also pushed for the review.

Trump ordered the review in April. It encompasses monuments designated under the act that are at least 100,000 acres and were created by executive action since the year 1996. The order requires Zinke to consider the designations’ impact on economic development and on “the available uses” of the land, and whether the monuments exceed “the smallest area compatible with the proper care and management of the objects to be protected.” Zinke has since traversed the country, meeting with select stakeholders and drawing impassioned crowds—and criticism—from within the debate over public lands management. Zinke just finished a major swing through Western states and must have recommendations for the monuments to Trump by August 24.

The Antiquities Act allows presidents to deepen protections for federal public lands via executive proclamation. Monuments covered by Trump’s order include designations made by former presidents Bill Clinton, George W. Bush, and Barack Obama, putting some of the West’s most contentious monuments under review.

Zinke’s tour started at perhaps the most controversial site: Bears Ears National Monument, in southeast Utah, which Obama created in December 2016, following years of negotiations with a vast array of parties, including a coalition of tribes for whom Bears Ears holds deep cultural and historical significance. In June, Zinke recommend shrinking Bears Ears, which encouraged Utahns who say the designation will have a negative impact on their livelihoods. On the other side of the debate, the threat to the monument has riled conservationists and tribal members who adamantly support protecting the landscape and ancestral sites.

Zinke has also visited Cascade-Siskiyou National Monument in southern Oregon, touring the area with Congressman Greg Walden, who was against Obama’s January 2017 expansion. Recently, the secretary got a look at New Mexico’s Organ Mountains-Desert Peaks National Monument, but gave few details on how it would fare in the review. During his one-day stop in Nevada, Zinke canceled meetings with several conservation organizations who support Gold Butte and Basin & Range National Monuments, in order to make a cabinet meeting in Washington, DC. The secretary did meet with the head of a local recreation and off-highway vehicle advocacy group. He also met with state Assemblyman Chris Edwards who contacted members of the Trump administration earlier this year to express criticism of Gold Butte.

Members of the public have submitted roughly 1.4 million comments on the monument review in recent months. In a recent study, the progressive advocacy group Center for Western Priorities selected 1,000 comments at random and found that 98 percent were pro-monument. Zinke has announced several monuments will remain unchanged by his review, including Hanford Reach, in Washington; Craters of the Moon, in Idaho; Canyons of the Ancients, in Colorado; and Upper Missouri River Breaks, in his home state of Montana, created by Clinton in 2001.

Still, Kelly thinks it’s possible that multiple national monuments could end up being revoked or significantly altered as a result of Zinke’s review. If that happens, pro-monuments groups will sue the administration, and are already preparing for that possibility, she said. “A number of organizations are taking a serious look at what their legal strategy would be.”