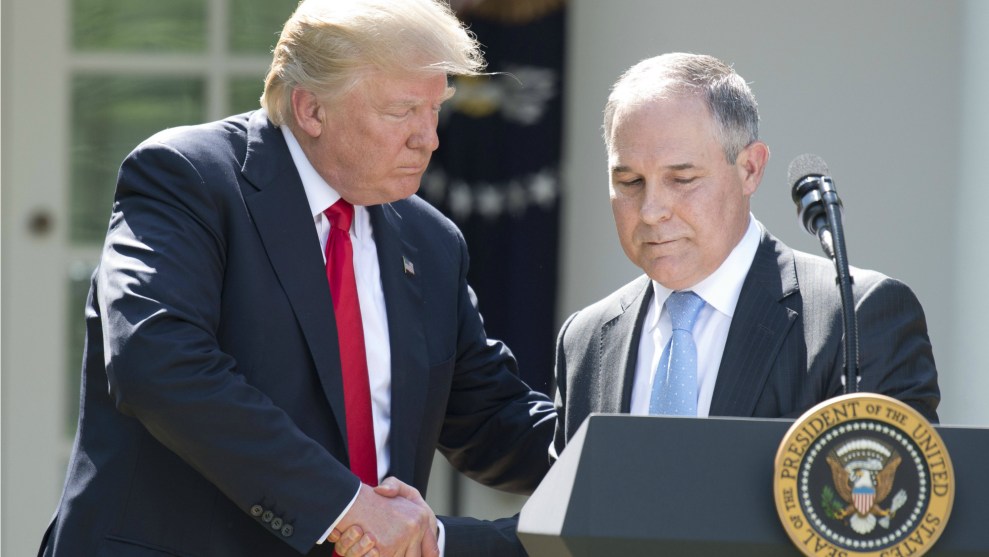 This week, a special section of the National Climate Assessment—a report mandated by Congress every four years, involving 13 federal agencies, and dozens of scientists—was the subject of a widely-circulated New York Times story.

Given Trump’s history of demeaning climate science, saying that climate change is a hoax, pulling out of the Paris climate agreement, and appointing an EPA chief who openly denies the science, it is not farfetched to assume that he not would take this report seriously. But there has been no evidence of any interference—yet. If Trump does intend to eventually stifle the report, it has backfired. Paradoxically, the administration’s hostile position to climate science has given the report greater currency than it might have had in a different administration.

“In an odd way, they are drawing more attention to the climate science report because the statements of the administration officials have been so out of whack with the science.”

“In an odd way, they are drawing more attention to the climate science report because the statements of the administration officials have been so out of whack with the science,” says the Union of Concerned Scientists’ Andrew Rosenberg, a former federal scientist who worked on the previous National Climate Assessment. The normal course of events, Rosenberg says, is for the report to go through multiple stages of review by agency scientists and the National Academy of Sciences. “What’s not normal,” he says, “is the attention it’s getting now because people are so worried the administration won’t release the final report and will try to change it.”

The fourth assessment, and the section that’s now under debate, is a sober reflection on the state of climate science. The draft focuses the public’s attention on the growing confidence of scientists to attribute specific extreme weather events to human activity. Scientists are very confident that there are fewer cool nights today than a few decades ago, more severe and frequent warm days, heavier precipitation, and more extreme heat waves. While the scientists make no policy prescriptions, they reiterate that the world can’t meet its goal to keep warming to below 2 degrees Celsius unless it reached zero, even negative, emissions by mid-century.

“This is the review of the underlying question: What do we know about the scientific evidence concerning climate change?” Rosenberg says. “It’s a synthesis of everything that’s gone on since the last National Climate Assessment. It forms the basis for understanding what the impacts are.”

In short, the report itself lays out the strong evidence for human-caused global warming and its consequences, contradicting EPA Administrator Scott Pruitt’s repeated claims that the question is still debatable. “It’s very clear,” Hayhoe says. “The climate is changing, humans are responsible, and the risks are serious.”

After the New York Times story was published, the conversation quickly veered into the vagaries of the peer review process and journalistic practices. There was confusion on Twitter over whether this was a leak, or if the fears expressed by scientists were exaggerated. Federal science agencies still have until August 18 to respond with comments, and Hayhoe and several other scientists noted that the third draft of assessment was already publicly available online.

Side-by-side comparison shows that @nytimes has public review version of our new climate sci report – so, no leak. It was available to all.

2. Not a "leaked" report: it has been publicly available for review and comment for months. Second, it's not a "final" report: many comments

All this is inside baseball and would likely not have received much attention were a different administration in the White House. The facts of the report may have been about global warming, but the more prominent point was that at least one unnamed scientist was concerned that this work would be censored by an administration known for its lack of transparency to please climate change deniers.

Adding to the confusion is the absence of leadership in the White House Office of Science and Technology Policy, which was responsible for coordinating comments for the report during the Obama administration. In contrast, there is the leadership of Scott Pruitt, Trump’s EPA administrator. Pruitt announced his intention to create red and blue teams to debate climate science, a plan that critics suggest only offers legitimacy to thoroughly debunked anti-science arguments. Then there is the study on how renewable energy affects reliability that was commissioned by the Department of Energy; the report, expected last month, still has not been released. Early leaks suggested that the report contradicted Trump’s arguments that renewables pose a threat and now the release date remains unclear. It’s not unreasonable to wonder if the National Climate Assessment will face similar delays.

White House press secretary Sarah Sanders seized on the confusion over which report the Times had published and wrote in response to the story that the process is moving forward in an orderly fashion. “It’s very disappointing, yet entirely predictable to learn the New York Times would write off a draft report without first verifying its contents with the White House or any of the federal agencies directly involved with climate and environmental policy,” she wrote. “As others have pointed out—and the New York Times should have noticed—drafts of this report have been published and made widely available online months ago during the public comment period. The White House will withhold comment on any draft report before its scheduled release date.”

Pruitt’s press team is picking up the same messaging, while ignoring the actual conclusions of the draft report on global warming:

Right now, some scientists are hoping the spotlight means the administration will proceed as it should. “We don’t know what the administration is going to do,” Rosenberg says. “People are justifiably nervous, but I think since there’s nothing right now let’s hope for the best. That they release the information and it has the impact it should.”

If all goes as planned, the fourth National Climate Assessment is expected to be formally released in late 2018.

In the meantime, some scientists wonder whether they might manage to generate the same attention for other reports on climate change: