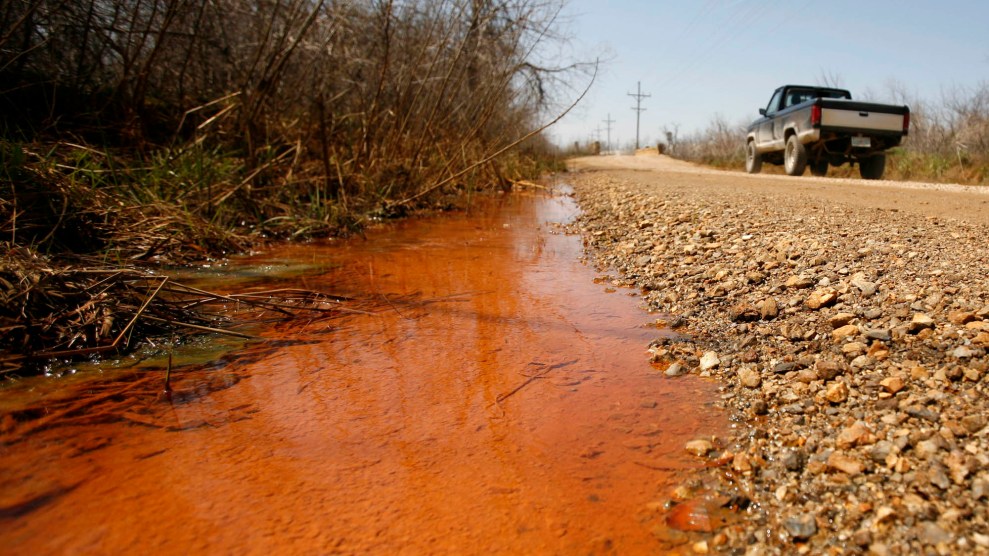 Water tainted with heavy metals and chemicals seeping from springs near Picher, Okla., in 2008. Years of lead and zinc mining turned the town into a Superfund site with sinkholes, lead-laced mountains of rock, and tainted water. Charlie Riedel/AP

On August 1, the Waste Management and Regulatory Oversight Subcommittee held a hearing to discuss the fate of Superfund, a program of the Environmental Protection Agency. The meeting came one week after the Superfund task force, which was created by EPA Administrator Scott Pruitt in May, released its first report with recommendations for cleanups of sites.

But the fate of the program may be threatened by budget cuts proposed to the EPA and the Superfund program, which will shrink by 30 percent if President Donald Trump’s budget is passed. Although Trump’s proposed cut to the EPA was expected, the deep cut to Superfund was not. Pruitt has previously said he does not support cutting the Superfund program and instead promised to prioritize it. “Unfortunately, many of these sites have been listed as Superfund sites for decades, some for as many as 30 years,” Pruitt wrote in an announcement of a Superfund Task Force in May. “This is not acceptable. We can—and should—do better.”

In her opening remarks, ranking committee member Sen. Kamala Harris (D-Calif), said Pruitt is setting unrealistic expectations for what Superfund can accomplish with a skinny budget. “The rhetoric and the reality may not add up,” she said. “I would like to hear how the agency plans to accelerate the pace of cleanups while significantly cutting the sources of funding to do that cleanup.”

Much of the hearing Tuesday focused on just that: how the agency expects to address the more than 3,000 cleanup sites—not including a backlog of proposed sites that have yet to be evaluated by the agency—in the midst of drastic cuts to the agency. Katherine Probst, an independent consultant and policy analyst who previously worked for the EPA’s Superfund program, said proposed budget cuts to the agency don’t line up with Pruitt’s priorities for cleanup. “It’s hard to imagine you can do long-term cleanups with those kind of draconian cuts,” she told the committee. “Some have said that the responsibility to cleanup should move to the states. But few if any states have the resources to clean up a site of that federal cleanup magnitude.”

At the end of the hearing, Probst warned that while some components of Superfund may remain intact, the real cost would be “choking off the long-term cleanup program.” “There’s nothing in (the task force’s) report that says that, but that’s a danger,” she said. “That’s what I would caution.” Sen. Jerry Moan took it a step further: “A vision without funding is a hallucination.”

For more information about Superfund sites, hover over the map. The map includes all sites determined to pose a real or potential threat to human health or the environment. It does not include proposed sites or withdrawn sites that the EPA determined did not pose a threat.