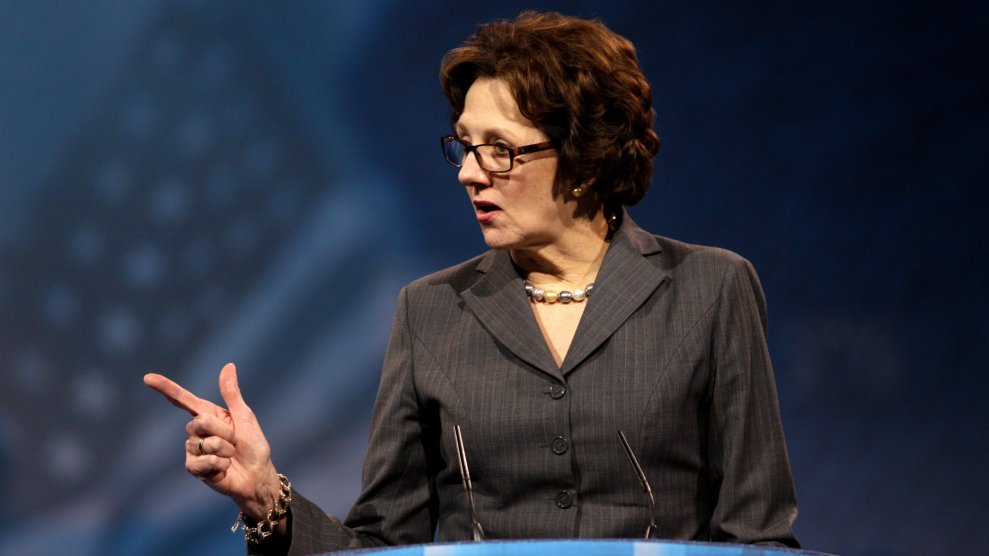 Susan Combs, one of Trump's latest nominees, speaks at CPAC in 2013.Gage Skidmore/Flickr

President Donald Trump is slowly working his way through nominating people for posts related to Western natural resources and the environment; several nominations came down this week. There are more than 1,200 White House appointees that must be vetted by Senate committee, then confirmed by a majority of the full Senate.

While Trump has yet to nominate anyone for hundreds of those positions—several of which directly affect Western states, including the directors of the Bureau of Land Management, the National Park Service and the Fish and Wildlife Service—the White House announced more than a dozen nominees this week, and the Senate moved forward on approvals for others.

Here are the people headed for some of those jobs:

Position: Assistant secretary for policy, management and budget in the Department of the Interior.

As head of the Office of Policy, Management and Budget, Combs would oversee the creation of the Department’s budget, among other duties related to increasing efficiency and standardizing agency programs.

Combs served as the state comptroller for Texas from 2007 to 2015. “Combs has been an outspoken critic of the Fish and Wildlife Service”—an agency within the Interior Department—“and the Endangered Species Act,” the Texas Observer reports. In 2011, Combs’ office “wrested away control of the endangered species program from the Texas Parks and Wildlife Department and since then has been dogged by a series of controversial decisions that appear to favor special interests over rare Texas species.” (Read the whole Texas Observer story here.) A top Texas-based Fish and Wildlife Service official who raised concerns in 2012 later became mired in a whistleblower retaliation case that led to his retirement.

Position: Assistant administrator for enforcement and compliance assurance at the Environmental Protection Agency

As head of EPA enforcement, Bodine would lead the agency’s efforts to uphold environmental laws, including the Clean Air Act, the Clean Water Act and the Toxic Substances Control Act. Her office would also oversee management of the National Environmental Policy Act, the law requiring federal agencies to assess environmental impacts before building or permitting projects.

Bodine has served as chief counsel to the Senate Environment and Public Works Committee since 2015. Her new position won’t be the first time she’s worked at the EPA. During the George W. Bush administration, she led the agency’s Office of Solid Waste and Emergency Response.

Bodine has also worked as a lawyer and lobbyist in the private sector. One group she represented was the American Forest and Paper Association, “a trade group whose member companies have hundreds of EPA enforcement actions issued against them,” E&E News reports. When asked by Senate Democrats about her previous employment and possible conflicts, however, Bodine dismissed those concerns: “If confirmed, I would have no problem taking appropriate enforcement action against any company,” she said in a written response, according to E&E News.

Position: Undersecretary for science in the Department of Energy

The Office of the Undersecretary for Science and Energy oversees several departments, including offices related to energy efficiency and renewables, fossil fuels, nuclear energy and scientific research. It also advises Energy Secretary Rick Perry on clean energy technology, though it’s unclear if Perry will maintain the current department structure.

Dabbar is a managing director at JP Morgan Chase & Co. and has “over $400 billion in investment experience across all energy sectors,” according to the White House. He also serves on the Department’s Environmental Management Advisory Board. He is a lecturer in economics at the U.S. Naval Academy; his scientific experience includes environmental research conducted while deployed to the North Pole as a nuclear submarine officer, and research at Johns Hopkins Applied Physics Laboratory, according to a White House statement.

Position: Undersecretary for energy in the Department of Energy.

Menezes would also serve in the Office of the Undersecretary for Science and Energy. He works for Berkshire Hathaway Energy as vice president of federal relations. Between 2003 and 2006, Menezes served as chief counsel to the U.S. House Committee on Energy and Commerce, where he contributed to the passage of the Energy Policy Act of 2005. The energy plan included a network of new fuel and electricity lines across the West that raised concerns over environmental impacts.

The Nuclear Regulatory Commission, led by five commissioners, is an independent government entity that oversees the nation’s use of nuclear energy. Its duties include licensing waste-storage facilities like the controversial proposed Yucca Mountain project in Nevada. Trump designated Kristine Svinicki, a commissioner since 2008, chair of the group in January; the Senate confirmed her reappointment to the commission in June.

Caputo has been a policy advisor on nuclear issues for House and Senate committees for more than a decade; she currently advises the chairman of the Senate Environment and Public Works Committee, Sen. John Barrasso, R-Wyoming. She has also worked for Exelon, “a large electric utility that operates more nuclear plants than any other company,” according to The Hill.

Wright is an energy consultant. He served on the South Carolina Public Service Commission, which administers the state’s public utilities, between 2004 and 2013, and was president of the National Association of Regulatory Utility Commissioners from 2011 to 2012.

Position: Commissioner and chair of the Federal Energy Regulatory Commission

This commission, also an independent government agency, has substantial influence in the West; it oversees electricity, natural gas and oil transmission between states. It licenses hydropower projects, reviews proposals for pipelines and terminals and regulates electricity sales between states, among other duties. The five-member commission has had at least three empty seats since February, leaving it without the ability to function effectively. Trump has already announced candidates for the other empty spots on the commission, though none have been confirmed by the full Senate —Democrats may be unwilling to approve the two Republican nominees until Trump officially nominates the lone Democratic nominee, allowing the three to move forward together, according to E&E News.

McIntrye, an energy lawyer for Jones Day, “has represented energy industry clients on a number of matters ranging from compliance and enforcement to trading, exports, marketing and more,” The Hill reports.

Position: Deputy secretary of agriculture in the Department of Agriculture

As the second-highest ranking official in the Department of Agriculture, Censky would help develop the 2018 farm bill, a giant bill traditionally passed every five years. Modern versions have distributed nearly a trillion dollars in food assistance, conservation programs and agricultural subsidies—much of which goes to giant corporations.

Censky has worked at the USDA before, under President George H.W. Bush and during the Reagan administration. While there, he helped draft the 1990 farm bill. He has also been the CEO of the American Soybean Association for more than 20 years. “The American Soybean Association is officially a farmer’s group, but it’s intimately tied to agribusiness,” reports Mother Jones; an annual trade show hosted by the association and other groups is “sponsored by Monsanto, Syngenta, DuPont and other agribiz heavyweights.”

Position: Administrator of the White House Office of Information and Regulatory Affairs.

Status: Confirmed by the Senate on July 10.

Often referred to as the “regulatory czar,” the head of the White House Office of Information and Regulatory Affairs oversees federal rulemaking; the office approves all proposed and final regulations. As The Hill puts it, “Rao will now be at the helm of Trump’s deregulation agenda.”

Rao has served as a lawyer for the executive and legislative branches of the federal government in the past, and was a law clerk for Supreme Court Justice Clarence Thomas. She is a professor at George Mason University’s law school, where she founded a center dedicated to studying government administration. The center has benefitted from a donation given by the conservative Charles Koch Foundation that prompted the renaming of the law school — to the Antonin Scalia Law School—last year, the New York Times reports. While Rao has worked to bring liberals and conservatives together in the past—she worked to gain an endorsement for the law school renaming from liberal Supreme Court Justice Ruth Bader Ginsburg—she has been clear on her mandate for her new role: She will make sure that Trump’s “deregulatory effort is effective, responsible and consistent with the law,” she said, according to the Denver Post.

No need for confirmation

Of course, many of the jobs in the federal government don’t require Senate approval. Interior Secretary Ryan Zinke announced this week that he has hired Todd Willens, a former lobbyist and congressional staff member, to be assistant deputy secretary of the Interior.

Willens, chief of staff for Rep. Steve Pearce, R-New Mexico, worked at the Interior Department during the George W. Bush administration, where he kept the Everglades off the UN list of endangered sites. (The Everglades was added to the list in 2010.) Willens also served as senior staff advisor to Richard Pombo, “the notorious California congressman who attempted to gut the Endangered Species Act,” HCN reported in 2008.