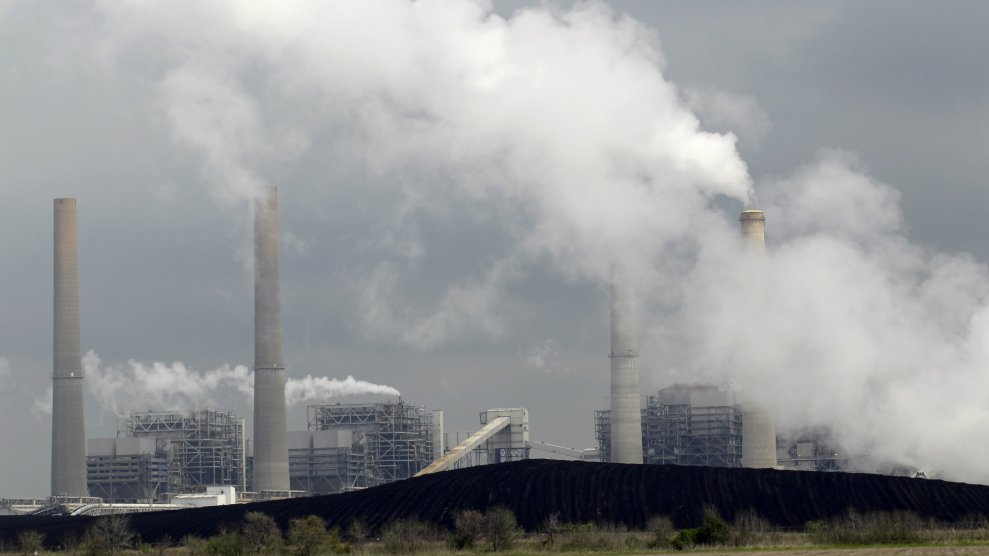 On June 4, Environmental Protection Agency Administrator Scott Pruitt claimed that since December 2016, the nation had “added almost 50,000 jobs in the coal sector. In the month of May alone, almost 7,000 jobs.”

Pruitt was trying to defend President Donald Trump’s withdrawal from the Paris climate agreement in a TV interview, but his figures aren’t even close to accurate. The US coal mining sector employs just 51,000 people as of May 2017, total, according to the federal Bureau of Labor Statistics, about 1,300 more in the sector than in December. Pruitt repeated the falsehood in two more interviews, and media outlets quoted it without correction, before his staff claimed that he had misspoken: He had meant to say that the entire mining sector—which includes oil and gas extraction—had added all those jobs. That’s not quite right, either, but at least it’s in the ballpark.

But an even bigger falsehood from Pruitt went largely unchallenged: The notion that the Trump administration and its decimation of Obama-era environmental protections are responsible for the job gains, and that the president is “leveling the playing field” in a way that is putting reliable, abundant coal back in its deserved spot atop the nation’s energy mix.

It’s true the field has long been tilted, but it has skewed toward coal and other fossil fuels, not against them. In fact, coal might have perished long ago had it not been for industry pushing—and funding—politicians to fetishize the fuel. Now that coal’s finally dying a natural death, however, even Trump and company can’t do much except perhaps delay the inevitable.

Now that coal’s finally dying a natural death, however, even Trump and company can’t do much except perhaps delay the inevitable.

Coal fueled the Industrial Revolution and played a huge role in the Euro-American settlement (and desecration) of the American West: It drove the locomotives, provided feedstock for the smelters, heated homes and powered steam engines that drove machinery. But coal was mostly absent from the first sprouts of what would grow into the intricate Western electrical grid. Those power plants were primarily fueled by water and gravity, which were free for the taking and abundant. Coal generators were few and far between.

In fact, when the grid was still in its infancy, hydropower was seen as a way to rid home furnaces and kitchens of messy, inconvenient coal. “Dirty coal, which the trusts now delight to sell at fancy prices,” wrote the editor of the Salida, Colorado, newspaper, in 1909, “will be a back number, and water power plants will furnish the citizens with heat. And so the world moves.”

Yet to the young electric utilities, coal offered something water did not: control. You could build a coal plant anywhere you could ship coal, and your power stream wouldn’t be subject to the vagaries of drought, flood or frozen water sources. More importantly, coal could be commodified, unlike free-flowing water or wind, and it required labor to extract it, which  made it a better fit for the capitalist system. Because it was a commodity, coal offered the opportunity for profit, and an industry grew up around its production. That, in turn, created the coal lobby (helped out by the railroads, which relied on hauling coal). Coal’s abundance and portability helped it ascend to dominance as a fuel for producing both electricity and heat, but it was the coal lobby’s influence on federal and state policies that kept it there for so long.

When, in the late 1920s, a gas pipeline was built from Texas to Denver, Colorado, a state where the coal industry was particularly powerful, legislators tilted the playing field by placing a tax on natural gas use and requiring state institutions to use coal to heat their facilities. A decade later, they were still fighting. “I will use every method within my power to aid in keeping our coal mines running at full blast and to bring about returned prosperity to the industry,” then-Colorado Gov. Teller Ammons said in 1937. (Ammons’ father, Elias, had also been a Colorado governor, and was infamous for sending National Guard troops to the state’s coal fields, where troops joined coal company thugs in gunning down dozens of striking coal workers and family members.)

The effort was ultimately for naught; within a couple decades the clean convenience of natural gas had knocked the coal stokers out of most homes and institutions. Railroads, meanwhile, replaced coal-fired steam locomotives with diesel ones, dealing another blow to the industry. Tens of thousands of coal mining jobs were lost during this time, due both to production cuts and mining mechanization.

Instead of surrendering, the coal lobby turned to electrical generation. In the 1950s the industry helped the nascent environmental movement kill proposals to build hydroelectric dams in Dinosaur National Monument and in the Grand Canyon because in addition to inundating natural wonders, they would have flooded the grid with cheap power. The Navajo Generating Station in northern Arizona was later constructed in their stead. In 1960 Congress established the Office of Coal Research “to encourage and stimulate the production of coal in the United States through research and development…(and maximize) the contribution of coal to the overall energy market,” and in the ensuing decades several gigantic coal power plants sprouted with government help in the Interior West.

Now, many of those same big plants are on their way out. On March 15, Reid Gardner coal plant in southern Nevada went dark for good; Navajo Generating Station will follow in 2019. Public Service Company of New Mexico intends to go coal free by 2031, which includes shutting down San Juan Generating Station in the state’s northwestern corner in 2022 and divesting from the nearby Four Corners Power Plant soon thereafter. And in 2025, Intermountain Power Plant in central Utah will also go down.

None of these closures will be stopped or even slowed by anything Trump does—not his withdrawal from the Paris Accord, not his evisceration of the Clean Power Plan, not even his lifting of the moratorium on federal coal leasing.

Pruitt was correct when he noted the slight uptick in coal jobs, even if he’s mistaken about the cause. After domestic coal production levels hit a three-decade low during the first half of 2016, it rebounded slightly over the third and fourth quarters, in part because natural gas prices jumped a bit this winter. That—along with an increased demand for metallurgical coal—explains the employment hike. Meanwhile, the jump in mining jobs overall is attributable to oil and gas extraction and the support thereof, the result of oil prices going up thanks to OPEC curtailing production (natural gas prices have not gone up enough to spur more drilling). The latter doesn’t bode well for those coal workers, either: As drilling for oil kicks up, so will natural gas production, since gas almost always accompanies oil—the now-booming Permian Basin oil play is expected to be a huge gas producer. That will further glut the market, lower prices and push utilities to further the transition to from coal to natural gas to generate juice.

In 1913, a newspaper article about the demise of the British chimney sweep profession circulated on the national wires. “Gas and electricity are doing away with the need for sweeps,” the article said. “In private houses, gas fires are taking the place of coal fires.” Yet a few sweeps remained in business because the “king and queen still cling to coal fires in all their personal apartments…” That’s one way to keep at least some of today’s coal industry alive: Trump could equip all his hotels with coal-fired furnaces.