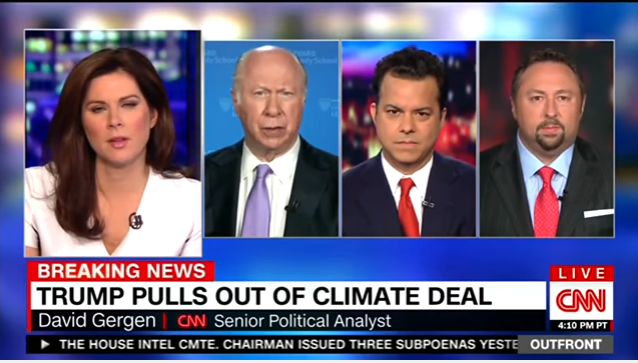 Climate change will have the greatest impact on communities of color, who face the highest risks from toxic spills, hazardous air, and dirty drinking water. And yet, they’ve been largely left out of the discussion about President Donald Trump’s decision to withdraw from the Paris climate agreement.

According to a new study from Media Matters, a non-profit media research group, out of the 286 guests who went on Fox News, MSNBC, and CNN to discuss climate change on the day Trump announced the withdrawal, and the day after, only 17 percent belonged to a minority race. Nine percent were black, 4 percent were of Asian descent, 3 percent were Latino, and less than 1 percent were Middle Eastern.

What’s especially striking about the lack of representation is the fact that multiple studies have shown that people of color are disproportionately affected by the changing climate.

The following year the Natural Resources Defense Council released a report that found that the majority of Latinos, like their black counterparts, live in California, Texas, Florida, and New York, which are states that will be the most affected by extreme flooding. Latinos are also more likely to hold jobs that require being outdoors such as construction and farm work, leaving them susceptible to extreme heat.

The heavy impact global warming is having on people of color is reflected in polling about Trump’s decision to pull out of the Paris agreement. A June 2-4 Washington Post-ABC News poll of more than 500 adults found that 71 percent of non-white respondents opposed the decision, compared to 54 percent of white respondents.

“Cable news shows consistently ignore and exclude the voices of people of color when covering climate change, and that’s a real problem,” said Lisa Hymas, Media Matters’ Climate and Energy Program Director. “African-American and Latino communities are generally hit the hardest by the effects of climate change. When their voices and views are given the attention they deserve, media coverage tends to be more forceful, more fair, and more accurate.”