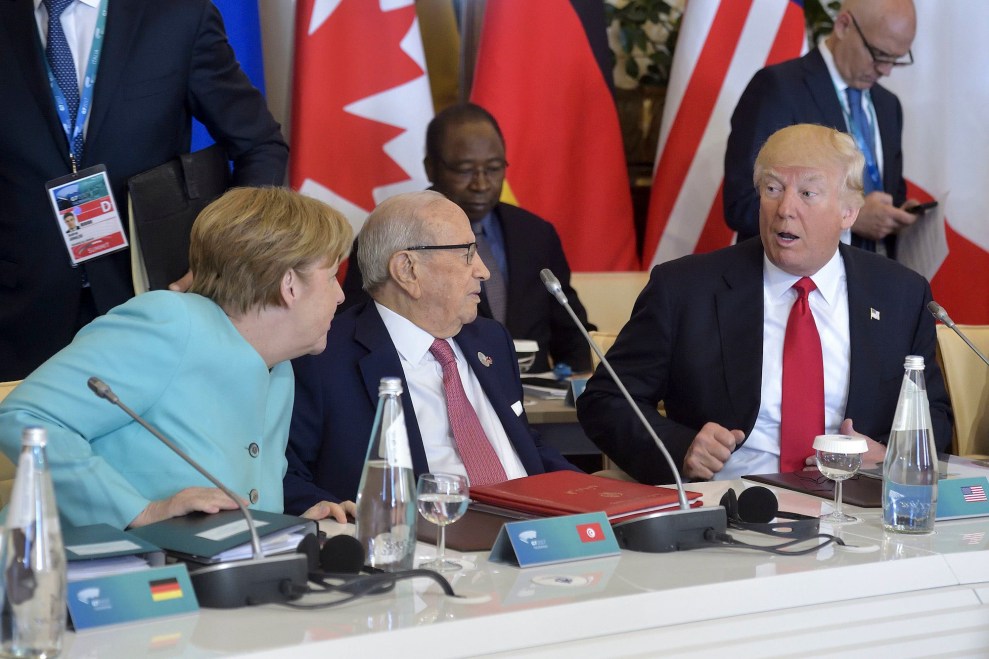 Multiple news outlets are reporting Wednesday morning that President Donald Trump intends to pull the United States out of the landmark Paris climate accord, citing White House officials. Trump himself continues to tease out the dramatic finish to a decision that he has put off for months:

I will be announcing my decision on the Paris Accord over the next few days. MAKE AMERICA GREAT AGAIN!

What’s not quite clear yet is whether Trump intends to pull out of the Paris agreement itself, or the entire treaty underlining all international climate change negotiations, called the United Nations Framework Convention on Climate Change. To pull out of Paris but keep the United States involved in the broader UNFCCC process would take more than three years, but withdrawing from the entire framework would be easier—though the backlash for doing so could be even stronger. Withdrawing from the UNFCCC, formed in 1992, would be a far more extreme move to undermine climate progress.

BREAKING: EU official: EU and China to reaffirm their commitment to Paris climate deal regardless of US decision.

The Paris deal, negotiated in late 2015, promised to be a new form of international cooperation to fight climate change. It didn’t promise any miracles for fighting climate change, such as keeping the world to under 2 degrees Celsius of warming or committing countries to legally binding targets, but it did rally big developing nations to promise emissions cuts for the first time in history.

The very basis for the deal, a so-called “bottoms-up” approach to greenhouse gas targets, was to avoid a legally binding treaty. Nations put forward  domestic targets and through international peer pressure can revise those targets to become stricter as time goes by. Far from imposing emissions targets on the United States, the deal just required the United States, like everyone else, to put a pledge on the table, which Trump could have then revised.

The Obama administration proposed to cut US emissions by 26 to 28 percent of its greenhouse gas emissions by 2025, detailed in the Clean Power Plan, another policy Trump has begun to unwind.

Another important part of the Paris deal is the Green Climate Fund, which mobilizes billions of dollars to help developing nations fight and adapt to climate change. Trump has refused to deliver on the rest of the United States’ $3 billion pledge to the fund.

Trump argues that the United States, the world’s second-biggest greenhouse gas emitter—and historically the largest polluter, period—got the unfair end of the Paris deal. His administration is split though: His Environmental Protection Agency chief Scott Pruitt has echoed Trump’s anti-Paris remarks during his campaign while lobbying in TV interviews for Trump to leave. Steve Bannon is also firmly in favor of leaving.

The other side’s main advocates are Ivanka Trump and Rex Tillerson. There are also some surprising Trump allies pushing Trump to retain a seat at the table, like Exxon Mobil and Peabody Coal. And in the last week, two Florida Republican congressman, Reps. Vern Buchanan and Carlos Curbelo, have pressed Trump to stay in the deal.

It was once unthinkable in the environmental community that the next US president would take this step. But Paris isn’t dead, even if the United States withdraws. It matters as much how other countries respond.

“Should the president withdraw the US from the Paris agreement it would define his America First foreign policy as being oblivious to important global challenges that the American people and our allies care deeply about,” says Nigel Purvis, who has worked as a US climate negotiator and is now president of the consulting group Climate Advisers. “Regardless of whether the US participates in the Paris Agreement, other countries will continue to take action against climate change. They understand that most of what they need to do to reduce their climate pollution are things that make their economies more competitive and their people better off.”