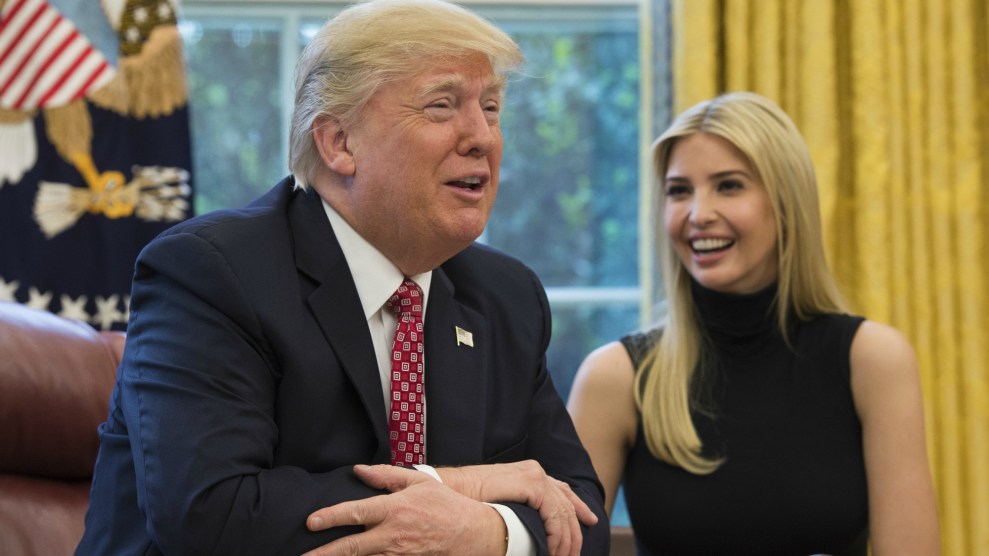 Will the president follow through on his campaign pledge to withdraw from, or “cancel,” the Paris climate change agreement?

Rumors have been swirling that the end to this reality show would come as early as Tuesday, when the White House had reportedly scheduled another meeting to examine its options. Ivanka Trump also was supposed to meet with Environmental Protection Agency Administrator Scott Pruitt earlier on Tuesday, but the White House did not confirm if that meeting ever took place. Discussions on the climate deal were canceled without much explanation, but when White House press secretary Sean Spicer was asked about the progress Tuesday, he replied that the president “wants to make sure he has an opportunity to meet with his team.” Trump has now decided he won’t decide on Paris until after G-7 meetings later this month in Italy, once more because he wants to “meet with his team.”

In the meantime, Trump is keeping 194 countries who signed the deal two years ago waiting and wondering. If he winds up withdrawing from the agreement, postponing the announcement might make meetings with world leaders slightly more pleasant, given their warnings that the United States shouldn’t defy the hard-fought 2015 deal.

We’ve heard for months that Trump’s Cabinet is split on what to do about both climate change policy and the Paris agreement. Ivanka Trump, now in her official role at the White House, represents those who want to stay. We’re told that she’s “passionate about climate change,” and she is joined by Secretary of State Rex Tillerson and economic adviser Gary Cohn, who are also in favor of staying in the Paris agreement. Energy Secretary Rick Perry wants to “renegotiate.” Secretary of Defense James Mattis sees climate change as a national security threat and likely favors staying involved, as does Trump’s son-in-law, Jared Kushner.

On the other side of the debate, Scott Pruitt is leading the “leave” team, echoing the president in calling the accord a “bad deal.” Team Pruitt also includes senior adviser Steve Bannon and White House Counsel Don McGahn. Attorney General Jeff Sessions has not publicly weighed in, but he opposed the deal as a senator. According to the New York Times, Pruitt’s side is convinced that staying in the Paris climate accord will be impossible if the administration wants to downgrade its ambitions. They point to a single clause in the agreement—that a nation “may at any time adjust its existing nationally determined contribution with a view to enhancing its level of ambition”—and argue that it would impose undesirable legal constraints on the administration and favor environmentalists in court.

Ivanka “wasn’t pushing for a strong position” and is more “in the direction of making sure her father gets the right advice.”

Pruitt’s legal argument surprised the groups that usually sue him. “We’re not relying on the Paris agreement for any of the Clean Power Plan litigation,” Jake Schmidt, the Natural Resources Defense Council’s international program director, says. “I’m not sure why anyone would use a city in France in a US court when there’s much stronger domestic law.” On top of that, negotiators say that nowhere in the largely nonbinding Paris deal does it legally force a country to meet or exceed its emissions targets. The only legally binding components of the accord commit countries to similar transparency and reporting standards to measure progress, or lack of progress, in meeting targets. Its biggest proponents argue that the agreement was built to be weak on legal enforcement, so as to keep as many countries involved as possible. International peer pressure, not legal pressure, is supposed to do the rest of the work.

The White House reportedly is leaning in Pruitt’s direction. And it’s unclear just how much of a fight Ivanka intends to defend her passions—E&E News‘ source notes she “wasn’t pushing for a strong position” and is more “in the direction of making sure her father gets the right advice.”

Yet given the public nature of this debate, no matter what happens, some members of the administration will end up embarrassed and, in most scenarios, we all lose. Here are some of the options for how this reality show might unfold:

Ivanka wins: She somehow convinces her father to wake up to the threat of climate change, and he decides to fulfill Obama’s promises to the world of at least a 26 percent cut to greenhouse gases by 2025 and providing the rest of the $3 billion in global climate finance.

This isn’t going to happen.

But not because others don’t support her alleged commitment to the agreement. In fact, she’s joined by nearly the rest of the world. According to the NRDC, an additional 1,106 US companies are on record supporting it, even including fossil fuel companies such as Exxon Mobil, Arch Coal, and Peabody Energy. The Yale Program on Climate Change Communication found 69 percent of American voters support participating, and hundreds of thousands of marchers took to climate protests around the country in April to send a similar message. Senate Republicans who pilloried the deal as illegal and overbearing when Obama negotiated now have lost the will to demand an exit.

Ivanka loses: If Trump follows through on his campaign promises and kicks off the multiyear process to withdraw from the Paris accord, it will tell us a lot about who Trump is listening to (short answer: not Ivanka or his secretary of state), especially since there are so few businesses or interest groups arguing that it’s a good idea for the United States to defy the rest of the world. The few that are include 44 fossil fuel advocacy groups, as well as the far-right think tanks that promote climate change denial: the Heritage Foundation, the Heartland Institute, and the Competitive Enterprise Institute. A “leave” decision would show that Bannon and Pruitt have considerable sway over Trump’s decision-making.

Add to the list Robert Murray, a coal magnate and head of the coal company Murray Energy. According to the Center for Responsive Politics, Murray Energy donated its most yet to candidates last year, giving several hundred thousand dollars to Trump’s campaign. CEO Robert Murray hosted a private fundraiser for Trump last June and has returned to Trump’s side a few times since to push his favored policies, which include reversing regulations on the coal industry and pulling from the Paris accord.

No one wins: Renegotiating the deal, as Rick Perry has suggested, would all but certainly drag on the Paris drama for years to come. Perry claims that European nations haven’t done their share, although their commitment of 40 percent cuts over 1990 levels by 2030 is steeper than those agreed to by the United States. “Don’t sign an agreement and expect us to stay in if you’re not really going to participate and be a part of it,” Perry told a Bloomberg energy conference in April. But renegotiating is not as simple as Perry suggests. The time for that has passed, since the agreement has already been negotiated and entered into last fall. And how does Trump plan on convincing other countries to ramp up their ambitions voluntarily if he is moving backward on US commitments? One point of leverage other countries have over the United States is following through on imposing a carbon tax on US products. And a Chinese government climate official warned Tuesday that Trump’s decision “will impact other diplomatic arenas, already on G7 and G20, the Major Economies Forum as well,” and “will harm the mutual trust in multilateral mechanism.”

Ivanka claims to win, but it’s meaningless: This would be the case if we stay in the deal in name only and don’t bother to cut emissions through federal policy. Environmentalists prefer this option to pulling out entirely, if only because it would be easier to pick up the pieces in four years if Trump isn’t reelected. Yet it’s not much of a win, and certainly not for someone who is as passionate about climate change as Ivanka says she is.

“We should be of good intent,” former EPA administrator and League of Conservation Voters chair Carol Browner said on a recent press call. “If we stay at the table, it should be with the intent of achieving measurable reductions” of greenhouse gases. “Any idea that we stay at the table so we can disrupt what the rest of the world is attempting is really outrageous on our part. And the rest of the world will see it.”