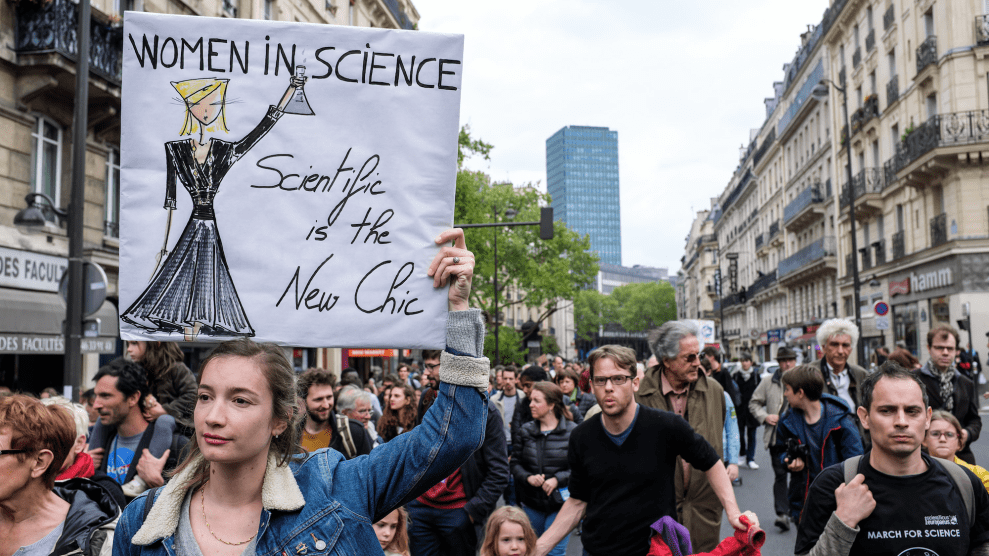 The day after President Donald Trump’s unexpected victory, Jane Zelikova was “crying her eyes out” in her office at the U.S. Department of Energy in Washington, D.C. As a scientist researching how big fossil-fuel industries can reduce greenhouse gas emissions, she feared that her work would be stymied because of the new president’s skepticism about climate change. As a Jewish refugee who came to the United States as a teen, she felt threatened by Trump’s anti-immigrant rhetoric during the campaign. The election also created a rift in her family: Her father voted for Trump; her mother sat out the election. “Every part of me that I identify with felt fear and anger combined into outrage,” Zelikova said.

She texted furiously with three close friends—other women scientists she had known since they went to graduate school at the University of Colorado, Boulder. At first, they simply shared their alarm. But by the second day, they wondered what they could do about it. “We moved into an email thread and added women scientists we knew,” Zelikova recalled. “It grew very quickly—from five people to 20 to 50 to 100—within a matter of a couple of days.”

They drafted an open letter from women scientists. “We fear that the scientific progress and momentum in tackling our biggest challenges, including staving off the worst impacts of climate change, will be severely hindered under this next U.S. administration,” they wrote. The letter rejects the “hateful rhetoric” of the campaign and commits to overcoming discrimination against women and minorities in science. Then they built a website and gathered signatures. Thousands signed on, and a new activist group was born: 500 Women Scientists.

“We fear that the scientific progress and momentum in tackling our biggest challenges, including staving off the worst impacts of climate change, will be severely hindered under this next U.S. administration.”

Zelikova’s experience mirrors a broader phenomenon. Many scientists felt threatened enough by Trump’s victory to abandon their usual detached objectivity. They wrote members of Congress to defend science funding and scientific advisory panels and used their knowledge of government research to protect data they feared could be erased from websites. They set up alternative Twitter sites for government agencies and planned and participated in protests. “The election mobilized scientists in a way we’ve never seen before,” said Gretchen Goldman, who leads research on science in public policy for the Union of Concerned Scientists, an activist group. “I’ve personally been blown away by the scientists who want to be engaged in a new way.”

Previously, Zelikova, a 39-year-old Ph.D. soil ecologist, had envisioned a future as a research scientist, working in academia or in government. But Trump’s election, she said, is changing her in ways she never could have imagined. Her whirlwind metamorphosis provides a glimpse into just how disruptive the last six months have been for some in federal government. Zelikova—who is intense, articulate and has an engaging smile—doesn’t have a permanent federal job. She took a leave from the University of Wyoming, where she’s a research scientist, for a two-year fellowship at the Energy Department. She had less to lose than career civil servants with mortgages and government pensions, so she felt freer to speak out.

The Trump administration has proposed deep staff and budget cuts for the Energy Department, Environmental Protection Agency and other agencies whose mission involves safeguarding the environment. Many federal workers committed to protecting the environment share Zelikova’s angst but won’t say so publicly for fear of retribution.

For weeks after the election, Zelikova barely slept, working late into the night on her new group. “I am a Jewish, refugee, immigrant, woman scientist. At some level, this felt really personally offensive to me, and like an attack on all the parts of me that make me a complete human,” Zelikova recalled. She had always been skeptical of political protests. She grew up in Eastern Ukraine, where Communist leaders used to orchestrate demonstrations in the 1980s. But Trump’s election moved her to join protests. Her first was the Women’s March the day after the Inauguration in Washington, D.C. After that, she frequently joined demonstrations, protesting Trump’s travel ban and the Dakota Access Pipeline.

Meanwhile, things were changing in Zelikova’s day job at the Department of Energy. In early December, Trump’s transition team sent out a questionnaire that attempted to identify employees who worked on climate change. Staffers feared the new administration would target people who had worked on former President Barack Obama’s climate change agenda. The day after the inauguration, with the Obama team gone, Zelikova attended a staff meeting at which, she said, only white men talked. “The backslide was immediate,” she said. Trump’s budget proposal, which came out in March, slashed funding for science and research. The morale at the agency was low and dropping.

“The backslide was immediate,” she said. Trump’s budget proposal, which came out in March, slashed funding for science and research. The morale at the agency was low and dropping.

Still, Zelikova kept working on her research. She was part of a team responding to Montana Democratic Gov. Steve Bullock’s request that the Energy Department analyze options for keeping the state’s largest coal-fired power plant, Colstrip, in business. Zelikova’s team came up with scenarios for reducing greenhouse gas emissions by 30 percent or more by installing equipment to capture carbon dioxide emissions.

Capturing carbon takes a lot of energy, however. So Zelikova went to Colstrip last fall to talk about using renewable energy—wind or solar—to power the carbon-capture process and thereby cut emissions even further. “Wouldn’t it be cool if instead of sucking that parasitic load off the plant, you powered it with renewable energy?” she said. She thinks the idea holds great promise for other fossil-fuel plants. “We went to national labs and universities, and we talked to people about how do we make this happen,” Zelikova said. “And then the election happened, and it felt like this isn’t going to happen.” Trump is determined to eliminate Obama’s Clean Power Plan, removing a major incentive for plants like Colstrip to reduce their greenhouse gas emissions. His budget proposal recommends slashing funding for the Energy Department’s renewable energy and fossil fuel research programs. “I’m seeing all that work become really threatened,” Zelikova said. “It feels like betrayal, because I got so personally invested.”

Her boss at the time, David Mohler, recalls her reaction: “She was distraught clearly and for understandable reasons; the Trump team is really not appreciative of science, and certainly they don’t believe in climate science.” Before becoming deputy assistant secretary of the Office of Clean Coal and Carbon Management, Mohler was chief technology officer for the country’s biggest electric utility, Duke Energy. Trump will probably slow reductions in greenhouse gas emissions, Mohler says. But even Trump can’t stop progress on climate change: Utilities won’t reopen closed coal-fired power plants, and low-priced natural gas will keep replacing coal. And Mohler believes that wind and solar will continue to expand because of declining costs, state mandates and tax incentives, which have bipartisan support in Congress.

Mohler, an Obama appointee, left government on Jan. 20, and moved back to South Carolina. Zelikova started thinking about leaving Washington, too. “Resistance as daily existence was starting to diminish my ability to function,” Zelikova recalled. She talked her supervisor into letting her move to Colorado in February for the rest of her fellowship. She continued to work for the Energy Department at the National Renewable Energy Lab in Golden. In her spare time, she kept building 500 Women Scientists. The group grew quickly, spawning nearly 150 local branches around the globe in just a few months.

One branch was founded in Seattle by Sarah Myhre, a 34-year-old climate change scientist at the University of Washington’s Department of Atmospheric Sciences. The group gave Myhre the courage to stand up to a prominent professor, Cliff Mass, from her own department.

In January, at a state legislative committee hearing, Myhre criticized Mass for stressing uncertainties about how much human-caused climate change is affecting wildfires and ocean acidification in the Pacific Northwest. Myhre described Mass as an “outlier” in the department whose views did not represent the broad scientific consensus. In online comments to a Seattle Times opinion piece Myhre wrote in February with Zelikova and another woman scientist, Mass called them “three idealistic young scientists (none of them really are climate scientists, by the way).” When Myhre traveled to Washington, D.C., at the end of April for the People’s Climate March, one of the women she marched with carried a sign that read: “Idealistic Young Real Scientists.”

A week earlier, on Earth Day, Zelikova joined other members of 500 Women Scientists for the March for Science in Washington, D.C., waiting for hours in a chilly rain to get through security screening for the rally at the Washington National Monument. Shivering in her watermelon-red ski shell, Zelikova reflected on the ways her life would be different if Trump had not been elected. “I would have never founded a big group—ever,” she said. “I would have never been a loud advocate for things. I would have never protested. These are now the hugest part of my life.”

At the end of May, Zelikova quit her fellowship at the Energy Department. In July, she will start a new job for a tiny nonprofit called the Center for Carbon Removal, based in Berkeley, California. She hopes to help states move forward on capturing carbon from fossil fuel plants. “Western states are perfectly poised to lead on climate action,” she said. “In terms of federal action, there’s going to be very little, so we need to work with states, so that when the political climate changes and there can be federal action, we can be ready to go.”