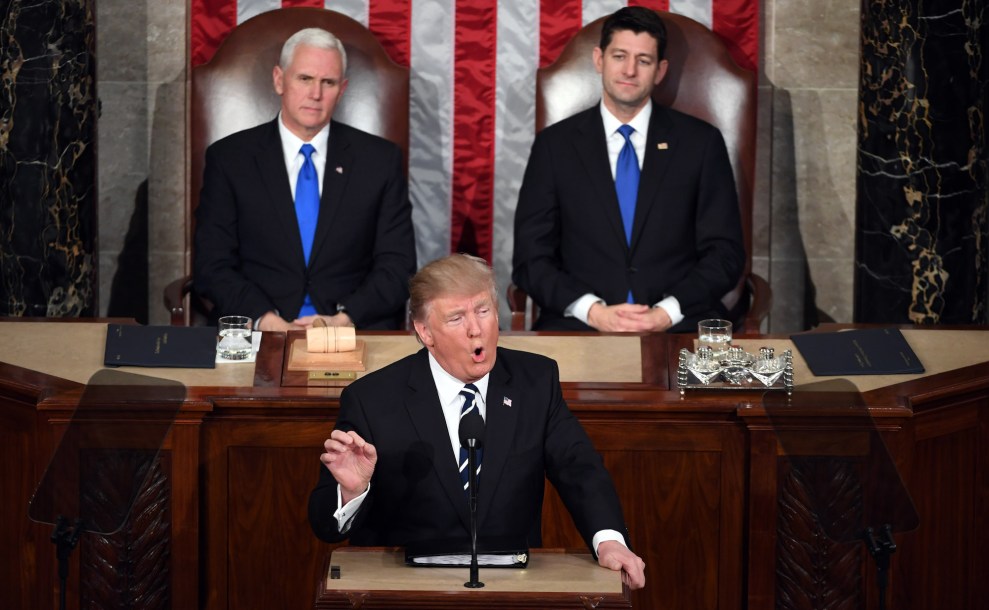 Even President Donald Trump likes clean water and air. During his speech to Congress Tuesday night, Trump certainly didn’t dwell on the matter: His pledge to “promote clean air and water” was lumped in a sentence with commitments to work with both parties, push for paid family leave, and “invest in women’s health.” But it was still there.

No matter who you ask—Republicans or Democrats—everyone likes to breathe air and drink water that won’t kill them. Air and water poll so well, in fact, that Republicans will almost never come out and say that their policies might actually make them dirtier. Trump used similar lines about clean air and water throughout the campaign, saying things like, “We are going to work very, very hard on clean air and clean water.” The subject also appears near the bottom of the energy section of the White House website.

But earlier Tuesday, Trump signed an executive order that directed the Environmental Protection Agency to limit the scope of what counts as a regulated body of water under the Clean Water Act. More executive orders are on their way, and career staff are waiting to hear how many of their jobs may be cut.

Several weeks ago, Trump and congressional Republicans repealed an Obama-era rule designed to protect waterways from coal mining waste. In addition, Republicans on Team Trump are opposed to regulating coal plants’ mercury pollution. Trump’s Environmental Protection Agency head Scott Pruitt filed a failed lawsuit as attorney general to overturn the regulation. He filed another lawsuit against the EPA regional haze rule, which requires state plans to clear the air around national parks. Republicans have also hinted they might revisit the EPA’s so-called “endangerment finding,” which declared that carbon pollution harms human health and is therefore subject to the Clean Air Act.

In a CNN interview just hours before Trump’s speech Tuesday, Pruitt revealed just how desperate Republicans sometimes are to avoid talking to the public about how their plans would impact air and water.

CNN’s Wolf Blitzer asked Pruit if he would be comfortable with cutting the EPA’s $8 billion budget by 25 percent, the amount that’s been floated by anonymous administration sources. “And if so,” asked Blitzer, “where will those cuts come from within the EPA?”

“Well half of the EPA budget is grant-related, and those grants go to states across the country for water infrastructure and those types of issues,” Pruitt answered. “That’s very important to protect.”

Blitzer then pressed Pruitt in four different ways to explain exactly what cuts he would like to see at the agency. Asked if we should expect big layoffs at the EPA, Pruitt didn’t answer beyond saying the EPA should operate within the rule of law. Asked how states can enforce regulations while the federal EPA budget is slashed, Pruitt again just explained the state grants will continue to be funded. But as a federal agency, the EPA does work that states can’t, from enforcement of federal law to accounting for pollution that isn’t confined to state borders. The 2011 cross-state air pollution rule is one example; in that case, the EPA required 27 states to limit their smog that was affecting down-wind states. Pruitt filed a lawsuit against that one, too.

The EPA has a number of other vital responsibilities that Pruitt didn’t mention, but it’s easier for him to focus on what is less likely to disappear, which is why he stuck to his talking points about the 40 percent of the EPA’s budget that funds state programs. The agency has used these power to clean up hazardous sites, force polluters to reduce smog and mercury emissions, and fine wrongdoers, like Volkswagen, which was accused of cheating on its emission tests. The EPA issues a cost-benefit analysis for each of its rules, and on the benefits side the agency notes that its actions save thousands of lives annually.

At one point, Blitzer asked Pruitt, “Can you guarantee that the water supply, the water people drink, will be safe if pollution isn’t limited?” Pruitt again didn’t really answer. States are “an active partner in ensuring water quality,” he said.

Pruitt seemed far more concerned about the EPA picking “winners and losers” in the energy industry, a talking point usually reserved for debates about how to allocate tax cuts to various energy sources. “Washington, DC, should not be in the business of picking coal or natural gas or wind or renewables, one over the other,” he said. “It should be about setting rules that apply fairly across the board to make things regular for all those that are in the industry.”

“Make things regular” is one of Pruitt’s favorite lines. But the administration is gambling with the safety of water and air, things we like to take for granted.