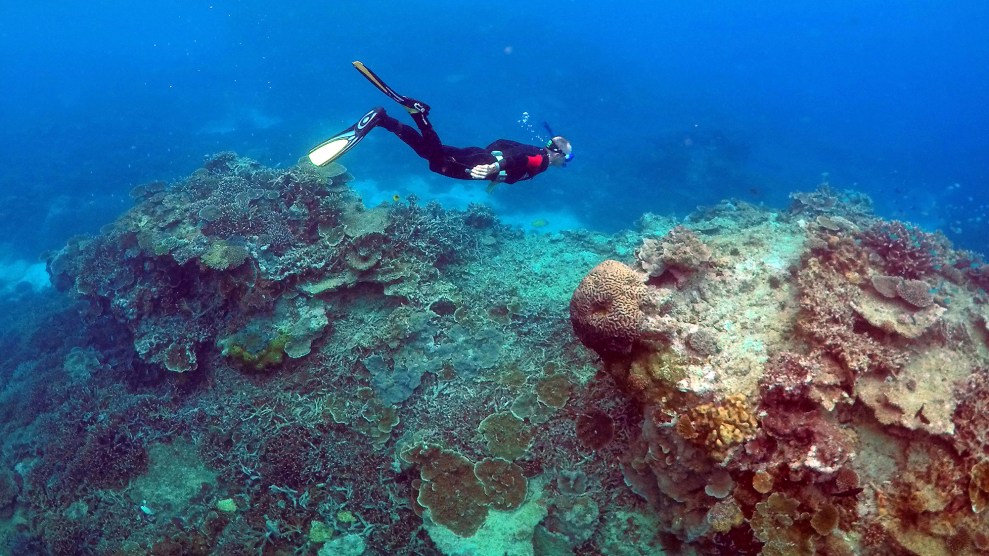 The survival of the Great Barrier Reef hinges on urgent moves to cut global warming because nothing else will protect coral from the coming cycle of mass bleaching events, new research has found.

The study of three mass bleaching events on Australian reefs in 1998, 2002, and 2016 found coral was damaged by underwater heatwaves regardless of any local improvements to water quality or fishing controls.

The research, authored by 46 scientists and published in Nature, raises serious questions about Australia’s long-term conservation plan for its famous reef, which invests heavily in lifting water quality but is silent on climate-change action.

The researchers said the findings of their paper, Global Warming and Recurrent Mass Bleaching of Corals, applied to coral reefs worldwide.

Its publication comes the same day its lead author, Terry Hughes, is due to embark on an aerial survey to confirm the extent of another mass bleaching event on the Great Barrier Reef.

It is the first mass bleaching to occur for a second consecutive year on the reef, which suffered its worst ever damage in 2016 when 22% of coral was killed off in a single hit.

The study, which was unable to take in the effects of the latest event, warned a fourth mass bleaching event “within the next decade or two” gave the badly damaged northern section of the reef a “slim” chance of ever recovering to its former state.

Hughes said the latest event, which was notable for having nothing to do with the warming effect of El Niño weather patterns, highlighted how research on mass bleaching, even when fast-tracked, was unable to keep pace with the reef’s current state.

“It broke my heart to see so many corals dying on northern reefs on the Great Barrier Reef in 2016,” Hughes said.

“With rising temperatures due to global warming, it’s only a matter of time before we see more of these events. A fourth event after only one year would be a major blow to the reef.”

Hughes said he hoped coming weeks would “cool off quickly and this year’s bleaching won’t be anything like last year.”

“The severity of the 2016 bleaching was off the chart.”

He said it also showed the folly of Australian and Queensland government support for one of the world’s largest coalmines, Adani’s proposed Carmichael mine, which will export coal in ships through reef waters.

This was not only because of the carbon emissions from the coal, but also from dredging and marine traffic through the reef.

“In its weakened state, the reef cannot afford the Adani mine,” he said.

The publication of the research comes the same week as Queensland government officials meet with Unesco officials in Paris to appeal for more time to make good on conservation efforts to ward off an “in-danger” listing for the reef. It also coincides with a visit by the Queensland premier, Annastacia Palaszczuk, to India to lobby Adani to proceed with its mine plan.

The study found that 91% of coral on the reef had suffered from bleaching over the past two decades.

The researchers concluded that “local management of coral reef fisheries and water quality affords little, if any, resistance to recurrent severe bleaching events: even the most highly protected reefs and near-pristine areas are highly susceptible to severe heat stress.”

“On the remote northern Great Barrier Reef, hundreds of individual reefs were severely bleached in 2016 regardless of whether they were zoned as no-entry, no-fishing, or open to fishing, and irrespective of inshore–offshore differences in water quality.”

Likewise, past exposure to bleaching, or relative resistance among certain corals to minor bleaching, gave no protection in the face of severe heat stress, the study found.

Local protection of fish stocks and improved water quality “may, given enough time, improve the prospects for recovery.”

“However, bolstering resilience will become more challenging and less effective in coming decades because local interventions have had no discernible effect on resistance of corals to extreme heat stress, and, with the increasing frequency of severe bleaching events, the time for recovery is diminishing.

“Securing a future for coral reefs, including intensively managed ones such as the Great Barrier Reef, ultimately requires urgent and rapid action to reduce global warming.”

This kind of “sustained absence of another severe bleaching event (or other significant disturbance) … is no longer realistic while global temperatures continue to rise,” they said.