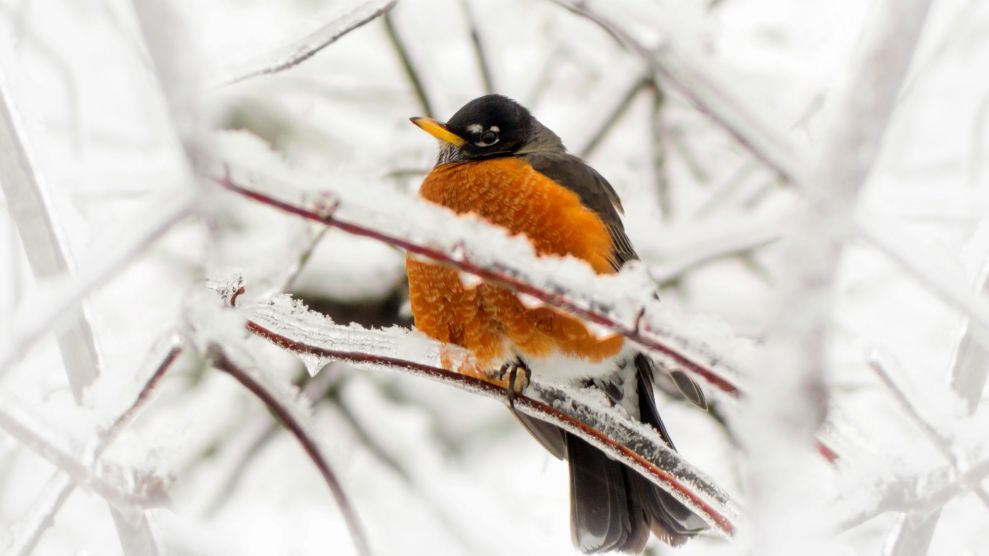 An American Robin red breast, an iconic herald of spring, caught in an icy snowstorm. In case you're wondering—this is not normal.SHSPhotography/Getty Images

The calendar might say March, but winter isn’t done yet on the East Coast. And in a year where traditional signs of spring have arrived nearly a month early, it’s looking like this year’s winter season will be compressed into a single day, with an impending blizzard on par with historical greats.

Snowstorms and cold weather traditionally bring out the science deniers (we’ll never forget you, Senator Snowball), but in an atmosphere that is being fundamentally changed by human activity, every weather event is influenced in some way by climate change, and this week’s storm is no exception.

If you live on the East Coast, you might have become complacent about epic snowstorms like this one. Twenty inches or so doesn’t seem like such a big deal when you’ve lived through similar storms. But looking at the data, you’ll see that 20-inch snowstorms are a relatively new phenomenon in places like New York City.

For the first 100 years that meteorologists kept weather records at Central Park, from 1869 through 1996, they recorded just two snowstorms that dumped 20 inches or more. But since 1996, counting this week’s storm, there have been six. (You’ll find similar stats for other major East Coast cities.)

We now live in a world where one of DC’s biggest March snowstorms and one of its earliest Cherry Blossom Festivals are happening in the same week.

Basically, we’ve become accustomed to something that used to be very rare.

There are a few reasons why this is happening. Just like on land, ocean temperatures are getting warmer. This matters because the ocean is where nor’easters—the particular brand of coastal storm that brings the biggest snow potential—derive most of their moisture. Warmer ocean waters provide more energy to growing coastal storms, and the Gulf Stream current, which carries subtropical waters northward just off the East Coast, is experiencing record warmth right now.

Last year, two studies were published that provided evidence that basic weather patterns over the East Coast are getting more extreme, too, as Arctic sea ice melts and modifies the behavior of the jet stream. At times, the weather pattern can get stuck in a manner that provides extra cold air from the north and extra moisture from off the ocean—which is what is happening more often now.

That sets the stage for epic snowfalls. This week, high-resolution weather models are insistent that an intense band of very heavy snow will form, bringing snowfall rates of up to five inches per hour to New York City and New England. That’s nearing the upper limit of what is physically possible in our current climate.

With just hours to go before the flakes start flying, meteorologists are running out of words to describe the impending blizzard, which is on track to dump one to two feet of snow across a wide swath of the Northeast and bring winds of tropical storm force to prematurely flowering trees in parts of the mid-Atlantic.

The National Weather Service is ringing all available alarm bells—an experimental winter storm severity index is maxed out over New York City—and warning of widespread power outages and the impossibility of travel during the height of the storm. But even they don’t have much experience with a storm of this scale happening so late in the season—it just doesn’t happen very often. So it’s hard to tell what to expect.

Perhaps the most consequential circumstance for this particular storm is that, according to the plants and trees, spring is already here. The combination of flowering tree branches with tropical storm force winds and heavy, wet snow isn’t a good one—power outages could be widespread. And this year’s crop of some economically important flowering trees, like the apple and cherry orchards on Long Island, could see significant damage.