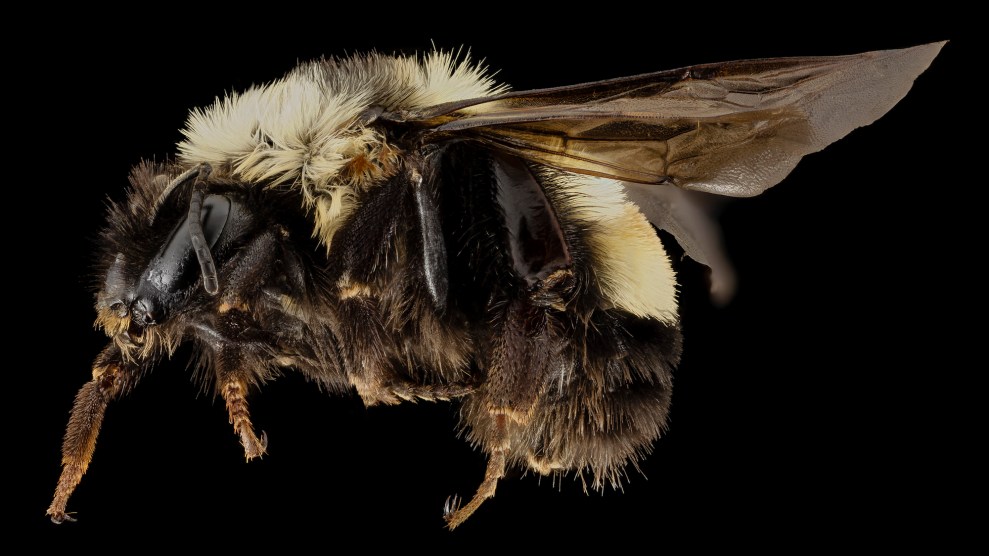 Update, March 22, 2017: The US Fish and Wildlife Service has reversed course and formally listed the rusty patched bumblebee as an endangered species. Here’s more from the Natural Resources Defense Council, which sued the federal government in February, “asking the court to stop the Department of Interior and U.S. Fish and Wildlife Service from violating the law by freezing the bumble bee’s listing.”

First, it was puppies. Now Trump is going after bees.

“We don’t think this is just a freeze—it’s an opportunity for the administration to reconsider and perhaps revoke the rule entirely,” said an NRDC attorney.

The official announcement of the delay cites a White House memo, released just after Trump’s inauguration, instructing federal agencies to freeze all new regulations that had been announced but not yet taken effect, for the purpose of “reviewing questions of fact, law, and policy they raise.” The Fish and Wildlife Service, which oversees the endangered species list, acted just in the nick of time in delaying the bumble bee’s endangered status—it was scheduled to make its debut on the list on February 10.

Rebecca Riley, a senior attorney for the Natural Resources Defense Council, told me the move may not be a mere procedural delay. “We don’t think this is just a freeze—it’s an opportunity for the administration to reconsider and perhaps revoke the rule entirely,” she said.

Why would the Trump administration want to reverse Endangered Species Act protections for this pollinating insect? After all, the rusty patched bumble bee has “experienced a swift and dramatic decline since the late 1990s,” with its abundance having “plummeted by 87 percent, leaving small, scattered populations in 13 states,” according to a December Fish and Wildlife Service notice. And it’s not just pretty to look at—the Fish and Wildlide Services notes that like other bees, rusty patched bumblebees “pollinate many plants, including economically important crops such as tomatoes, cranberries and peppers,” adding that bumblebees are “especially good pollinators; even plants that can self-pollinate produce more and bigger fruit when pollinated by bumble bees.”

The answer may lie in the Fish and Wildlife Service’s blunt discussion of pesticides as a threat to this bumblebee species. Like commercial honeybees, bumblebees face a variety of threats: exposure to pesticides, disease, climate change, and loss of forage. FWS cited all of those, noting that “no one single factor is likely responsible, but these threats working together have likely caused the decline.” But it didn’t mince any words about neonicotinoids, a class of insecticides widely used on US farm fields.

Neonics, as they’re known, are a highly contentious topic. They make up the globe’s most widely used insecticide class, with annual global sales of $2.6 billion, dominated by agrichemical giants Syngenta and Bayer (which is currently in the process of merging with Monsanto). They have been substantially implicated in the declining health of honeybees and other pollinators, birds, and waterborne animals. The European Union maintains a moratorium on most neonic use in farming, based on their threat to bees. The US Environmental Protection Agency is currently in the middle of a yearslong reassessment of the risk they pose to bees and other critters.

Here is what the Fish and Wildlife Service wrote about neonics in the context of the rusty patched bumblebee:

Neonicotinoids have been strongly implicated as the cause of the decline of bees, in general, and for rusty patched bumble bees, specifically. The introduction of neonicotinoid use and the precipitous decline of this bumble bee occurred during the same time. Neonicotinoids are of particular concern because they are systemic chemicals, meaning that the plant takes up the chemical and incorporates it throughout, including in leaf tissue, nectar and pollen. The use of neonicotinoids rapidly increased when suppliers began selling pre-treated seeds. The chemical remains in pre-treated seeds and is taken up by the developing plants and becomes present throughout the plant. Pollinators foraging on treated plants are exposed to the chemicals directly. This type of insecticide use marked a shift to using systemic insecticides for large-scale, preemptive treatment.

Note also that of the 13 states that still harbor scattered rusty patched bumblebee populations, four—Illinois, Indiana, Iowa, and Ohio—are in the US Corn Belt, where corn and soybean crops from neonic-treated seeds are common.

The NRDC’s Riley noted that as the EPA reassess neonics, it is obligated to consider the insecticides’ impact on endangered species. If the rusty patched bumblebee makes it onto the list, that would place an endangered species that’s clearly harmed by neonics directly into the region where the lucrative chemicals are most widely used—possibly forcing it to restrict neonic use in those areas. It’s worth noting that the man Trump chose to lead the EPA transition team, Myron Ebell, works for the industry-funded Competitive Enterprise Institute, which runs a website, SafeChemicalPolicy.org, that exists to downplay the health and ecological impacts of chemicals. More on that here.

If science guides the Trump team, this fast-disappearing bumblebee will get its endangered status soon, Riley said. “We don’t think there’s any legitimate basis to roll this rule back,” she said. “The original decision to protect the bee was based on comprehensive scientific analysis.” The question is the degree to which science will guide the administration as it decides the fate of this once-flourishing insect.