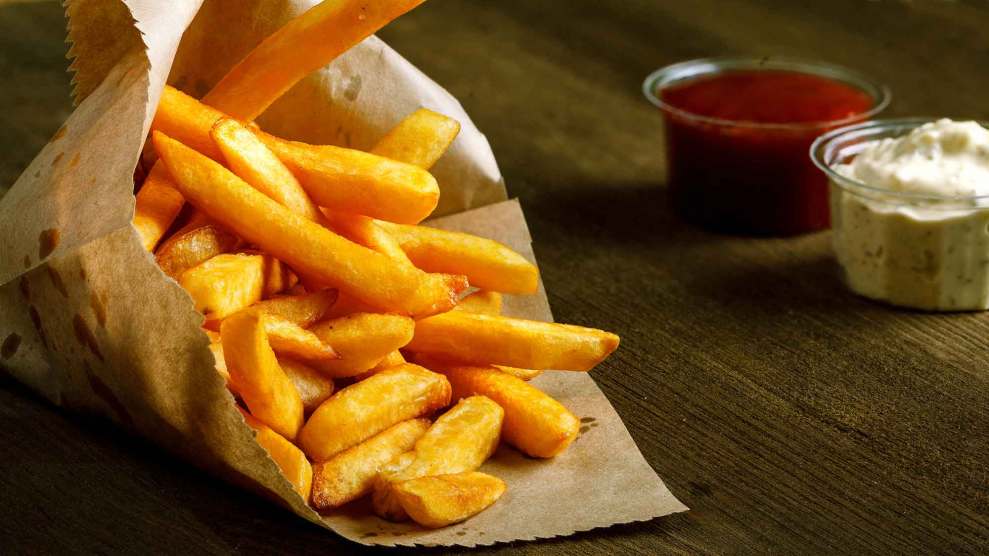 Burgers and fries aren’t exactly known for their health benefits. But beyond the grease, starch, and empty calories, there’s another reason to steer clear of fast food: the chemical-laden containers that it comes in. Grease-proof food packaging—like the papers enveloping fast-food hamburgers and pastries and the boxes cradling fries or pizza—can contain nasty chemicals that migrate over to the food we consume and stick around the environment indefinitely, with potentially worrisome effects to our health.

PFOA refuses to break down, even at high temperatures, making it really hard to get rid of.

One of the substances that was once popular for grease-proofing, perfluorooctanoic acid (PFOA), is a slippery, man-made chemical that is great at resisting water and was once essential to dozens of products including DuPont’s nonstick Teflon, Gore-Tex waterproof clothing, fire-fighting products, and microwave popcorn bags. PFOA refuses to break down, even at high temperatures, making it really hard to get rid of. That started to worry researchers once they uncovered its associations with high cholesterol levels, immune system issues in children, low birth weight, and certain types of cancer. (You can read much more about PFOA’s harmful effects in this Intercept investigation and this New York Times Magazine profile.) Because of its link to health problems, PFOA was phased out of production in the United States by 2011 and is now banned for use in food packaging here.

But PFOA is still hanging out in our waterways and soil, and apparently hasn’t completely disappeared from the food we eat, either. A new peer-reviewed study by scientists at the Environmental Working Group, the Environmental Protection Agency, and other organizations found traces of PFOA in a few packaging samples it collected from fast-food restaurants in 2014 and 2015, years after the production phaseout. And they found evidence that the next generation of grease-resisting substances, known as per- and polyfluoroalkyls (PFCs or PFASs for short), are also still turning up in food wrappers and boxes—despite concerns that these chemicals persist in the environment and have molecular structures similar to that of PFOA. An international group of scientists sounded an alarm about these new fluorinated chemicals in 2015 and called for producers to “stop using PFASs [PFCs] when they are not essential or when safer alternatives exist.”

For their study published in Environmental Science and Technology Letters, the researchers collected 407 samples from 27 fast-food restaurants, including Burger King, Chick-fil-A, and Krispy Kreme, in 2014 and 2015 and tested them for the presence of fluorine, a strong indicator of PFCs. Thanks to a rapid screening process, the researchers write, their results provide “the most comprehensive assessment to date of the prevalence of fluorinated compounds in US fast food packaging.”

They found elevated fluorine levels in more than half the dessert and bread wrappers tested.

Of the food packaging samples tested, they found elevated fluorine levels in more than half the dessert and bread wrappers, 38 percent of sandwich and burger wrappers, and 20 percent of paperboard (think french fry boxes). Follow-up tests confirmed the existence of specific PFCs in some of the samples, reinforcing fluorine as a good indicator. In these follow-up tests, they also found traces of PFOA—the disturbing Teflon chemical.

Some fast-food companies might be using the chemicals unintentionally. The researchers make clear that the PFCs may have turned up in material that was recycled from other packaging with PFC coatings. And it’s possible that the paper showing traces of PFOA “may have been contaminated during the manufacturing process or by contact with other materials coated with the compound,” explains an EWG report accompanying the study. Burger King reportedly phased out the use of fluorinated chemicals in its packaging in 2002. A spokeswoman for Krispy Kreme wrote in an email that after the company changed its packaging supplier in 2016, “we now have packaging in the US that does not contain PFAS.” A spokeswoman for Chick-fil-A wrote to tell us that the company’s packaging complies with all FDA regulations.

Most of the PFCs detected were the new generation of coating chemicals meant to replace PFOA. While these break down more easily than PFOA and don’t stay in the body as long, researchers still find their presence alarming. “Even though the new replacements, in theory, don’t build up in your body as fast, they have pretty much the same chemical structure as the ones we know are dangerous,” Bill Walker, the vice president of the Environmental Working Group, explains. “And that same property that means they don’t build up in your body as fast means they may more readily migrate out of food contact paper.”

A 2008 FDA study found that “fluorochemicals paper additives do migrate to food during actual package use,” aided by catalysts like hot temperatures and even grease (making this problem all the more acute with fast food). EWG senior scientist David Andrews says there’s very little public information on the leaching properties of these new coatings. The concern with the replacement chemicals, he explains, is when you eat a burger wrapped in this new type of grease-proof paper, there’s potential that “you’re actually getting slightly more of the molecules because the molecules are slightly smaller.”

When you compost PFC-coated paper, “you’re putting these persistent contaminants in the environment where they may migrate into water sources and be taken up by plants.”

There’s another way these new chemicals migrate into our environment: Many of the paper products bearing the coatings are labeled as compostable. But while the paper breaks down, its PFC coating may not (at least for a very long time). When you compost this type of packaging, says Andrews, “you’re putting these persistent contaminants in the environment where they may migrate into water sources and be taken up by plants.”

Fortunately, there’s plenty of PFC-free paper on the market. More than half the samples tested in this study revealed no fluorine, meaning the paper likely had no PFCs. The EWG points out that manufacturers like Maine’s Twin Rivers Paper Company, the Netherlands’ Akzo Nobel, and France’s Imerys make fluorine-free varieties. Yet fast-food companies may not even realize that they should be alarmed if wrappers enveloping their croissants contain PFCs: Because there’s still little known about this next generation of chemicals, manufacturers can put them out into the market through an FDA loophole that allows them to claim a product is “generally recognized as safe” without actually testing its safety.

Walker sees the test results as a wake-up call to food companies: “We’re not saying one restaurant is safer or more dangerous than the others. This says, okay, it looks like there’s a problem here, and you should investigate this.”