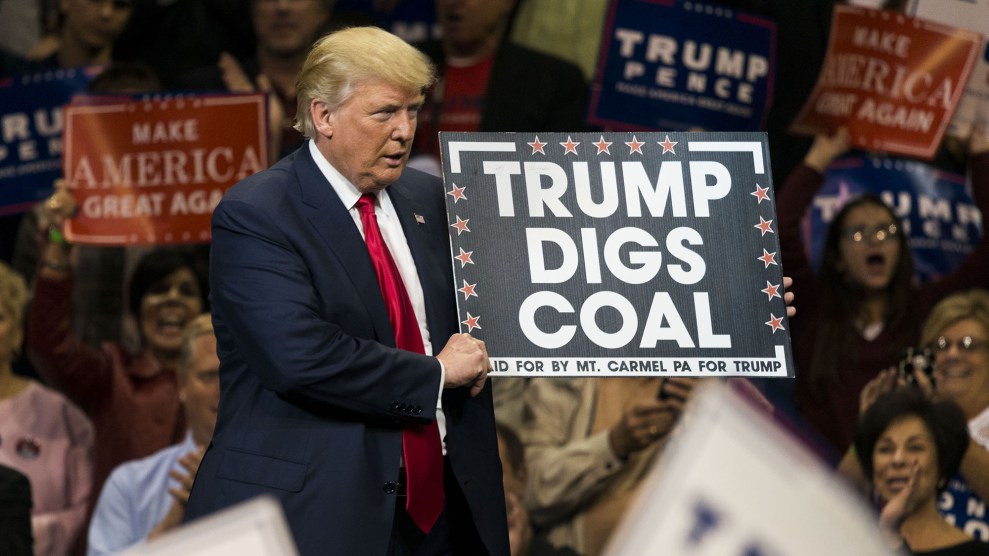 This story originally appeared on The Huffington Post and is reproduced here as part of the Climate Desk collaboration.

The Environmental Protection Agency has frozen its grant programs, according to sources there.

EPA staff has been instructed to freeze all its grants—an extensive program that includes funding for research, redevelopment of former industrial sites, air quality monitoring and education, among other things—and told not to discuss this order with anyone outside the agency, according to a Hill source with knowledge of the situation.

An EPA staffer provided the information to the congressional office anonymously, fearing retaliation.

It’s unclear whether the freeze is indefinite or temporary as the agency transitions fully to the Trump administration; the Senate has not yet confirmed Trump’s pick for EPA administrator, Scott Pruitt. It’s also not clear the immediate impact the grant freeze would have on programs across the country, since EPA grants are distributed at varying intervals and frequency.

“I will say it’s pretty unusual for us to get these kinds of anonymous contacts from people at the agency, which makes me think it’s unusual,” said the Hill source.

Neither the Trump transition office nor the central press office at the EPA responded to a request for comment Monday.

The Huffington Post also received a message that was reportedly sent to staff Monday that seems to cover the current agency guidance on talking to the press in general, not just about the directive on grants. The memo states that the agency is imposing tight controls on external communication, including press releases, blog posts, social media, and content on the agency website.

I just returned from a briefing for Communication Directors where the following information was provided. These restrictions are effective immediately and will remain in place until further direction is received from the new Administration’s Beach Team. Please review this material and share with all appropriate individuals in your organization. If anyone on your staff receives a press inquiry of any kind, it must be referred to me so I can coordinate with the appropriate individuals in OPA.

I will provide updates to this information as soon as I receive it.

(“Beach team” refers to staffers for the new administration working at the various agencies while new leadership is put in place; “OPA” most likely refers to the “Office of Public Affairs.”)

There are clearly major changes underway at the EPA as the Trump team takes the helm. Trump appointed Myron Ebell, the director of the Center for Energy and Environment at the libertarian think tank Competitive Enterprise Institute and a fierce EPA critic, to oversee the transition work at the agency. Axios reported Monday that the Trump team plans to cut $815 million from the agency’s budget, for programs like states and tribal assistance grants, climate programs and other “environment programs and management.”

Pruitt has a long history of battling the agency over environmental regulations as the attorney general of Oklahoma, describing himself as “a leading advocate against the EPA’s activist agenda.”

UPDATE: In a report later Monday night, ProPublica confirmed the freeze in an interview and reported it also includes EPA contracts. Ebell told ProPublica the freeze is to “make sure nothing happens they don’t want to have happen.”

“This may be a little wider than some previous administrations, but it’s very similar to what others have done,” he said.