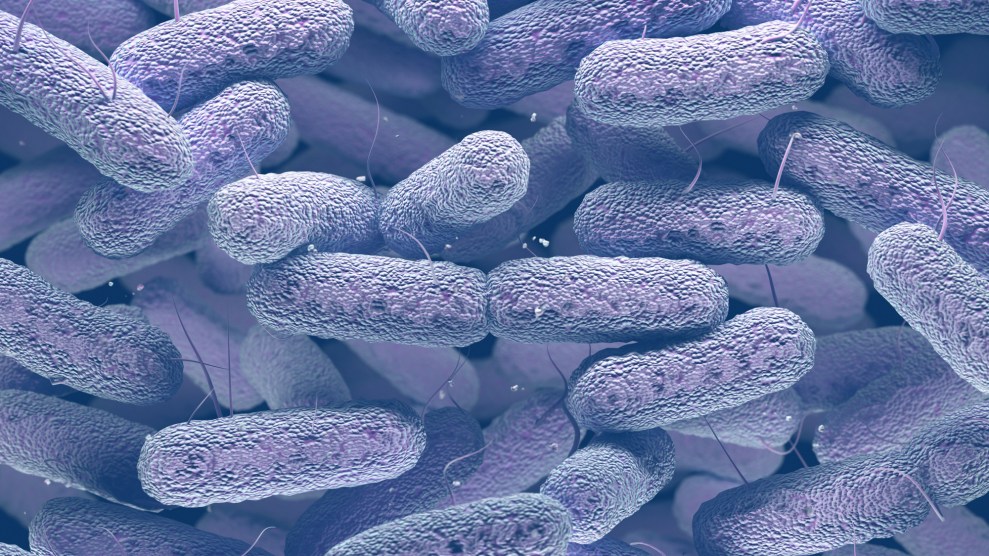 For a while now, the specter of “pan-resistant” pathogens—superbugs so super that they can withstand all available antibiotics—have haunted US and global public health authorities. This week, we got news of one showing up in the United States.

Nearly 80 percent of the antibiotics used in the United States flow into livestock farms.

An elderly Nevada woman died in September after being infected by a strain of Klebsiella pneumoniae that was “resistant to all available antimicrobial drugs,” the Centers for Disease Control and Prevention revealed in a Friday note.

For Americans, the good news is that she probably didn’t contract her fatal infection here. She had been on an “extended trip” to India, CDC reports, where she had been hospitalized several times for a broken femur (thigh bone). Since she had a history of foreign hospitalizations, the US hospital in Nevada where she died sent a sample of Enterobacteriaceae for extensive CDC testing, as the CDC recommends in such cases. The result: The bug showed resistance to no fewer than 26 antibiotics. The fact that other patients admitted to the Nevada hospital tested negative for the same strain suggests the patient picked it up in India.

But that should be cold comfort. Bacteria don’t respect borders—they travel rapidly, not just in people and products, but also in wild birds. As Sarah Zhang recently put it in The Atlantic:

Over and over, scientists have identified genes conferring resistance to a class of antibiotics, only to find the gene had circled the globe. Another recent example is ndm-1, a gene found in 2009 that confers resistance to class of antibiotics called carbapenems. “It’s very rare to catch something at the very beginning,” says Alexander Kallen, a medical epidemiologist with the Centers for Disease Control and Prevention. Looking for resistance is a constant game of catch-up. You don’t notice anything until there is something to notice; by the time there is something to notice, something bad has already happened.

Too often, though, media reports about antibiotic resistance neglect to mention a key driver: modern meat production. The unraveling of antibiotics as a tool to fight infections is intimately related to the way we have raised animals for decades, dosing them with antibiotics to make animals gain weight faster and avoid infections despite in tight, unsanitary conditions. Overuse in human medicine also drives the problem, but nearly 80 percent of the antibiotics used in the United States flow into livestock farms.

The CDC, the World Health Organization, the UK government, and other public health authorities warn that overuse of drugs in meat farming are a key generator of antibiotic-resistant pathogens, which cause 90,000 US deaths annually, while also racking up $55 billion in costs and causing 8 million additional days that people spend in the hospital, according to the National Institute of Allergy and Infectious Diseases.