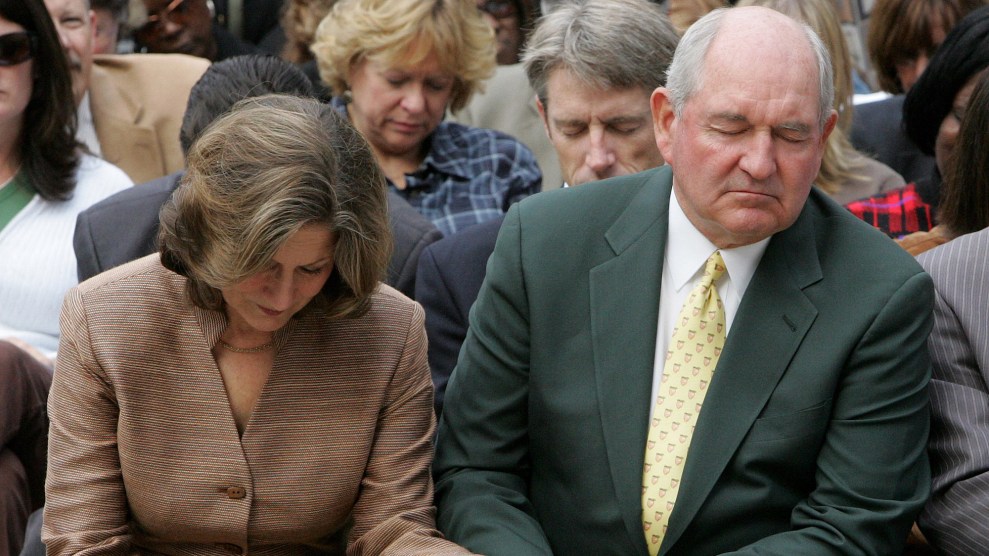 Then-Gov. Sonny Perdue of Georgia and his wife Mary pray during a service for rain on the steps of the Capitol in 2007. "We've come together here simply for one reason and one reason only: To very reverently and respectfully pray up a storm," Perdue announced. <a href="http://www.apimages.com/metadata/Index/YE-Georgia-News-Top-10/f33cc409bef648f194ee95a18ab65fc4/2/0">John Bazemore</a>/AP Photo

Update: After months of indecision and a barrage of trial balloons, Trump has tapped former Georgia Gov. Sonny Perdue to head the US Department of Agriculture, Politico reports. Trump will be the first president since Jimmy Carter not to have chosen a Latino for his cabinet. More on Perdue below.

Update (1/6/2017): A new wildcard has emerged: Indiana agribusinessman Kip Tom, who visited Trump Tower Thursday. Tom, a member of Trump’s rural advisory committee during the campaign, owns Tom Farms, which calls itself a “global crop production, sales and service company” and “one of the leading suppliers to the DEKALB seed production supply chain.” DeKalb is a unit of seed/agrichemical giant Monsansto. The operation received $2.6 million in subsidies from the federal government between 2004 and 2014, according to the Environmental Working Group. Tom’s failed 2016 campaign for a seat in the US House was lavishly funded by a slew of agribiz interests, including Bayer, Monsanto, Syngenta, Dow, the National Pork Producers Council, and Cargill.

Update (1/5/2017): Now Sonny Perdue has galloped back to the head of the pack. Politico reports that two sources told its reporters Wednesday that  Trump is “poised” to name the former Georgia governor as his pick for USDA chief. The quote directly below seems worth bearing in mind, though.

“It’s very risky to think you know anything, because you don’t,” said John Block, a member of Trump’s agriculture advisory council who served as Agriculture secretary under Ronald Reagan. “We don’t know anything.” Block added that he’s confident Trump will pick someone who will “do a good job leading agriculture.”

Last week, Donald Trump’s transition team let slip to Politico that the president-elect was “scrambling to appoint a Hispanic official to serve in his Cabinet amid criticism that his incoming administration lacks diversity at the highest levels.” Chief of the US Department of Agriculture—one of just two remaining open cabinet slots—was the likely place for said Hispanic, Politico reported. In this post, I looked at the two leading Latino candidates for Trump’s USDA.

Perdue signed a law declaring April to be permanently recognized in Georgia as “Confederate History and Heritage Month,” in a proclamation that neglected to mention slavery.

But that push for diversity was, apparently, very 2016. It’s a new year, and now Politico is reporting that Sonny Perdue—Georgia’s decidedly non-Hispanic former governor—is the leading pick. If Trump moves ahead with Perdue, he’ll be the first president since Jimmy Carter without a Latino person in his cabinet.

Elected in 2003 as Georgia’s first Republican governor since 1871, Perdue held that office until 2011, when he had to step down because of the state’s two-term limit. On the national stage, his most famous act was his response to a crippling drought in 2007: he led a public prayer for rain in front of the state capitol. “I’m here today to appeal to you and to all Georgians and all people who believe in the power of prayer to ask God to shower our state, our region, our nation with the blessings of water,” Perdue declared.

If Perdue gets the USDA nod, he won’t be the only Trump cabinet appointee who has resorted to prayer in response to a drought. Former Texas Gov. Rick Perry, Trump’s choice as energy secretary, did something very similar in 2011.

While Perdue is not related to the Maryland-based family behind chicken giant Perdue, he is no stranger to agribusiness. Before entering politics, he ran a small fertilizer business, reports the Macon Telegraph. And soon after exiting office in 2011, Perdue launched Perdue Partners, which Bloomberg Business describes as a “global trading company” with an impressive array of offerings: “food ingredients, such as blueberries, grains, onions, peanuts, pecans, soybeans, and spinach; finished food and beverage products, including appetizers, batters and breading, chicken products, distilled beverages, dressings and sauces, fruit cakes, and wine; finished consumer goods that include pet food and beauty products; and industrial goods, such as geotextiles and agrotextiles.”

As governor of Georgia, Perdue presided over the nation’s number-one chicken-producing state. Over his seven successful campaigns in Georgia politics, Perdue received a total of $328,328 in donations from agribusiness interests, including $21,000 from Gold Kist, a large Georgia-based chicken-processing company that was later taken over by chicken giant Pilgrim’s Pride. Other major Perdue donors include Coca-Cola ($26,100) and beer giant Anheuser-Busch.

Ironically, given that he’s a white male poised to take one of the final slots on a nearly lily-white cabinet, Perdue has a disturbing nostalgia for the Confederacy. Back in 2010, he signed a law declaring April to be permanently recognized in the state as “Confederate History and Heritage Month,” in a proclamation that neglected to mention slavery.