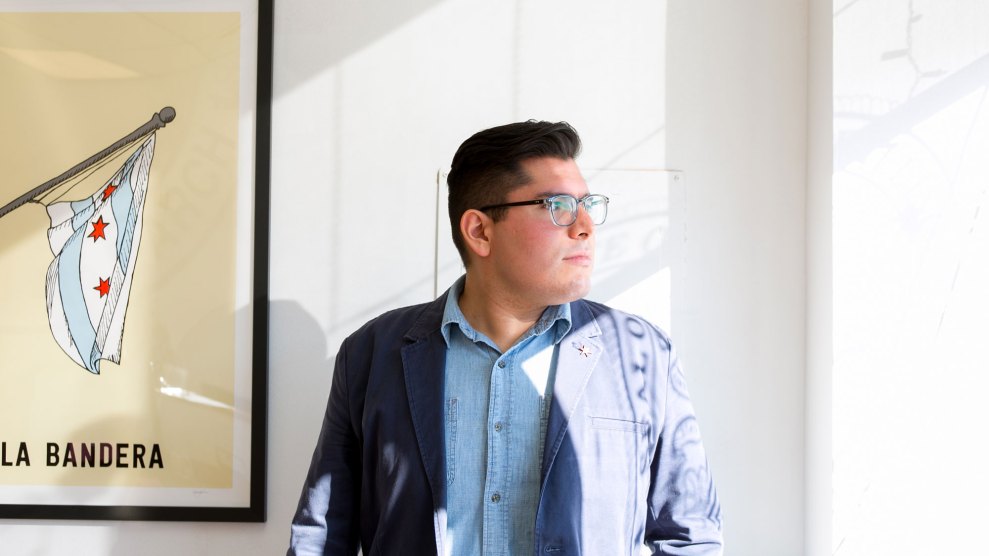 Chicago Mayor Rahm Emanuel held a press conference Wednesday to assure anxious residents that Chicago would remain a “sanctuary city”—meaning local law enforcement won’t help federal agents with President Donald Trump’s plan to deport millions of immigrants, a plan that just got a lot more real. In December, Emanuel told Trump to his face that he should rethink his proposed policies—specifically, that he should retain the Deferred Action for Childhood Arrivals program, which has allowed undocumented immigrants who were brought here as young children (and for all practical purposes are Americans) to stay in the United States.

Yet even as Emanuel gets recognition as a mayor willing to stand up to Trump on immigration, 27-year-old rookie Alderman Carlos Ramirez-Rosa has been pushing for stronger legal protections in the city—especially given the White House’s reported intent to engage state and local police in its deportation efforts. “What we really need,” the alderman told local reporters “is less symbolism and more action.”

“I wasn’t elected to cozy up with the rich and powerful,” Ramirez-Rosa says.

Ramirez-Rosa is a Chicago native, the son of a Puerto Rican dad and a Mexican-born mom. He grew up in the Lakeview neighborhood on the city’s North Side and went to a magnet high school before attending the University of Illinois at Urbana-Champaign. After graduating, he become an aide to Illinois Rep. Luis Gutierrez, running his boss’ social-media efforts and working directly with families facing deportation. Just two years later he managed to unseat Rey Colon, the four-term 35th Ward incumbent, to become one of the youngest members of the City Council and its first openly gay Latino.

As an alderman, Ramirez-Rosa has made immigrants’ rights his main focus, and the overwhelming message he hears from affected families is that the city hasn’t done enough to protect them. “I’ve been fighting this mayor [since] before I took office,” Ramirez-Rosa told me. “I wasn’t elected to cozy up with the rich and powerful. I was elected by my constituents to represent their interests.”

Chicago’s 2012 sanctuary city law, the Welcoming City Ordinance, prevents city police from detaining undocumented immigrants on behalf of federal authorities. But the law contains several exceptions: for immigrants who have a criminal warrant out on them, who have been convicted of a serious offense, who are defendants in a criminal case, or who have been identified as part of a gang. Some of these carve-outs mean that people who haven’t been found guilty of a crime could be refused sanctuary. A Chicago Police Department spokesman told me that, to his knowledge, the police have not acted on any of the exceptions, and that they were intended for extreme circumstances. Still, Ramirez-Rosa and his constituents want those carve-outs removed to give legal backup to the city’s commitment to not cooperate with Immigration and Customs Enforcement.

Ramirez-Rosa wants Chicago, with its 183,000 undocumented immigrants, to be a model for immigrant protections. While Chicago’s law is already stronger than those of many sanctuary cities, it falls short of Philadelphia (which has no exceptions, barring extreme circumstances) and Los Angeles, New York City, and San Francisco (which have only a couple). He has been busy organizing and educating immigrant communities to be ready for the Trump administration. “The focus right now,” he said, “is preparing the community.”

If Trump convinces Congress to withhold funding from sanctuary cities, Chicago could lose up to $1.3 billion.

Back in 2015, Ramirez-Rosa and more than a dozen local immigrants’ rights groups joined forces to create the Chicago Immigration Working Group, which has come up with six key policy goals. Bolstering the Welcoming City ordinance is one of them. They’ve also persuaded the city to launch an ID program that’s open to undocumented immigrants and helps them access city services. Emanuel has committed just over $1 million to a legal defense fund for would-be deportees, although Ramirez-Rosa points out that San Francisco, with a fraction of Chicago’s undocumented population, has just proposed a $5 million legal-defense fund. The alderman also co-sponsored an amendment that makes it illegal for police to threaten people with deportation during a confrontation, or to verbally abuse them. (During a 2013 raid, a Chicago cop famously yelled at a naturalized Chinese American man that he’d “put you in a UPS box and send you back where the [expletive] you came from!”)

This week, Trump signed orders to begin construction on a Mexican border wall and add detention centers and federal agents to the deportation effort. He also doubled down on his threat to rescind federal funding from sanctuary cities that won’t cooperate with the feds on deportations. If Trump follows through, Chicago stands to lose an estimated $1.3 billion—Congress would need to approve the cut. Trump’s attorney general pick, Sen. Jeff Sessions of Alabama, is in favor of repealing DACA and opposes a path to citizenship to undocumented immigrants. Democrats in the Senate have delayed his confirmation vote, which is now expected to take place in February.

If Trump declares war on immigrant families today we are ready to fight back. Chicago must be the anti-Trump with bold progressive policies.

Given all the uncertainly about what will happen, Ramirez-Rosa and his office are making it a priority to educate the immigrant community. Earlier this month, he started a door-to-door outreach effort and “know your rights” trainings to teach undocumented families what they can do to fight deportation attempts. Next up: a “cop-watch” type network in his ward so neighbors can alert one another if federal immigration agents are in their area. In an act of solidarity, Ramirez-Rosa has even declared his office a sanctuary location, a move he hopes other aldermen will copy.

“We’re nowhere near the other cities that are actually national leaders on this.”

Ramirez-Rosa was in talks with Emanuel’s office last year. The mayor wasn’t always such a full-throated defender of immigrant rights, the alderman notes; as chair of the House Democratic Caucus, Emanuel once called immigration the “third rail of American politics,” and he actually pushed to ramp up deportations while working under President Bill Clinton in the mid-1990s. “We know the history of this mayor,” Ramirez-Rosa says. “He just wants the sound bite on TV where he says ‘I’m your champion.'”

But the alderman is feeling more hopeful of late. The talks with the mayor have gone well, he says, and Emanuel even asked for a memo outlining the working group’s proposals. Emanuel’s office wouldn’t comment on plans to alter the carve-outs. But it pointed out in a statement that the mayor started a task force (“Chicago Is With You”) with Rep. Gutierrez and Sen. Dick Durbin (D-Ill.) late last year to provide legal and mental-health services to immigrants and others in need, and he’s involved in other efforts to help immigrants.

But Chicago leaders have to do much more, Ramirez-Rosa insists. The measure of progress, he says, “is in the actual ordinances and resources that the city is bringing to bear. And we’re nowhere near the other cities that are actually national leaders on this.”