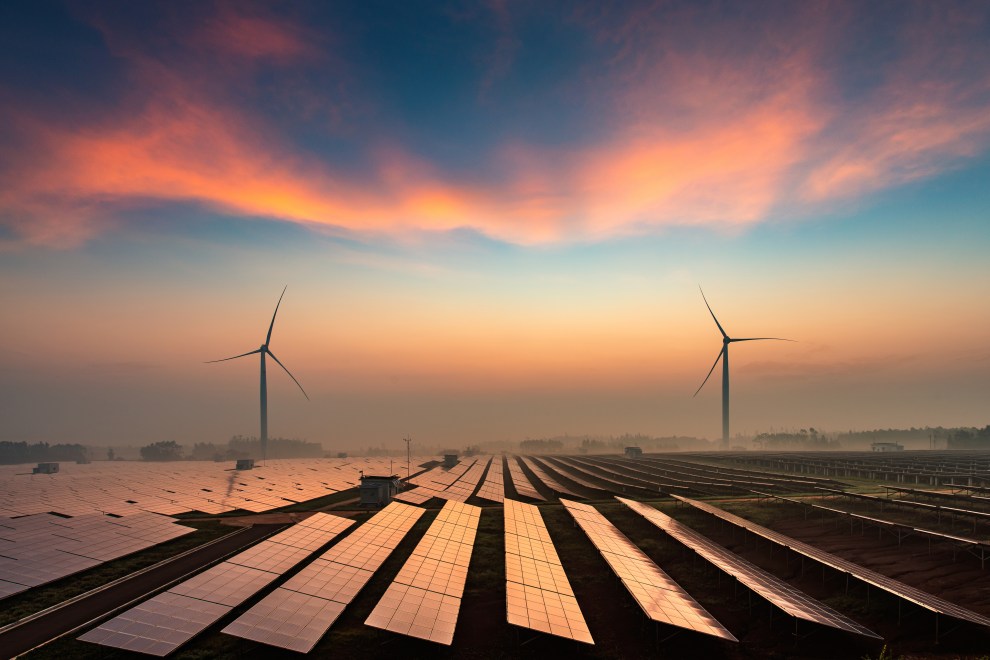 Tech giants are jockeying to be the first to hit a 100 percent renewable energy goal. Google, which has invested in solar and wind energy for a decade, intends to get there by 2017.

Google is the largest corporate buyer of renewable energy and plans to buy enough wind and solar energy to offset all the electricity used by its 13 data centers and offices in 150 cities worldwide, the company said Tuesday.

Apple seems close to reaching its own 100 percent goal as well. The company said it achieved 93 percent in 2015. An Apple spokeswoman said the company has yet to set a year for when they would likely cross the finish line.

“We want to run our business in an environmentally responsible way, and energy consumption is the largest portion.”

For Google, hitting the 100 percent target means for every unit of electricity it consumes—typically from coal or natural gas power plants—it would buy a unit of wind or solar electricity. The company wouldn’t say how much electricity it will need to have purchased by the end of next year to reach its 100 percent goal, but did say that the amount would exceed the 5.7 terawatt-hours solar and wind energy that it bought in 2015.

“We want to run our business in an environmentally responsible way, and energy consumption is the largest portion,” said Neha Palmer, head of energy strategy and development at Google’s Global Infrastructure Group.

Google is taking a big leap to that 100 percent goal, having achieved just 37 percent in 2014. The company has invested in renewable energy ever since it kicked off the construction of a 1.6-megawatt solar energy system in 2006. Since 2010, it’s signed 2.6 gigawatts worth of solar and wind contracts.

The tech giant isn’t alone in setting the 100 percent target. A global campaign to promote 100 percent renewable energy use in the business world includes Ikea, Facebook, Starbucks and Johnson & Johnson.

Businesses, like homeowners, have historically relied on their local utilities for power. In 2015, about 67 percent of the electricity generated in the United States came from fossil fuels. Businesses would have to build and run their own solar or wind farms if they want to hit their 100 percent more quickly, but that will require hefty investments and expertise they don’t have. As a result, when companies set strong renewable energy goals, they often reach them by buying enough solar and wind electricity or renewable energy credits to offset their use of electricity from coal or natural gas power plants.

Some companies, such as Google and Microsoft, have invested in solar and wind power plants to help increase the amount of renewable energy in the local electric grids. Or, using their clout as large energy customers, they work on convincing their local utilities to invest in renewable energy.

Once extremely expensive, solar and wind have seen their prices falling significantly in the past 10 years. Government tax breaks have also helped to make solar and wind more affordable to both businesses and homeowners.

The price for building large solar farms that have the scale to supply utilities dropped 12 percent in 2015, according to Lawrence Berkeley National Laboratory, part of the US Department of Energy.

“There is no company on the planet that can’t make a 100 percent energy target a viable, cost-effective strategy.”

Market analysts expect the prices to continue to fall even with the abundance of cheap coal and natural gas. The pressure on countries around the world to meet their targets from the Paris climate agreement, which went into effect last month, will make renewable energy attractive, said Bloomberg New Energy Finance. The research firm has projected that solar and wind will become the cheapest sources of electricity for “most of the world” after 2030.

“Renewable energy has become incredibly cost effective,” said Dan Kammen, a professor of energy at the University of California-Berkeley. “There is no company on the planet that can’t make a 100 percent energy target a viable, cost-effective strategy.”

Yet most businesses have yet to set a renewable energy target. That’s because cost isn’t the only issue. Big companies tend to have an advantage over smaller firms because they have the resources to understand the energy markets and negotiate contracts to buy renewable energy, said Colin Smith, solar analyst for GTM Research.

“You’re talking about very complex deals and arrangements with unique risk profiles that most companies aren’t fully well equipped to understand,” he said.

Google currently pays for wind and solar power from 20 renewable energy projects in the United States and abroad, in places such as Sweden and Chile. However, it doesn’t limit itself to buying solar and wind only in regions where it operates and sees itself as a champion of reducing the emissions produced by the electric industry, which is the largest source of greenhouse gas emissions in the United States.

“Wind and solar developers couldn’t get financing without us guaranteeing to pay for the power in the long term,” said Palmer.

Setting the 100 percent renewable energy goal is not the only way to reduce a company’s carbon footprint, said Dan Reicher, executive director of the Steyer-Taylor Center for Energy Policy and Finance at Stanford University.

Businesses should first look at cutting down on their energy use and becoming more energy efficient, said Reicher. That will then reduce the amount of renewable energy they need to procure.

“From an economic and environmental perspective, you want to start with energy efficiency.”

“Energy efficiency tends not to sound as sexy, just as putting solar panels on your roof is more interesting than putting an efficient furnace in your basement,” he said. “But from an economic and environmental perspective, you want to start with energy efficiency.”

Reicher also noted that electricity isn’t always the biggest source of energy for a business. FedEx, for example, uses far more energy in transportation, he said.

“Often a big chunk of a company’s business goes beyond electricity,” said Reicher. “What are they doing on the industrial side, on the transportation side, for heating and cooling?”

The election of Donald Trump as president has worried renewable energy supporters about the progress made to make solar and wind competitive against coal and natural gas.

Google doesn’t anticipate changes to its renewable energy initiatives in the near future.

“The results of any one election won’t change our plans,” said Palmer.