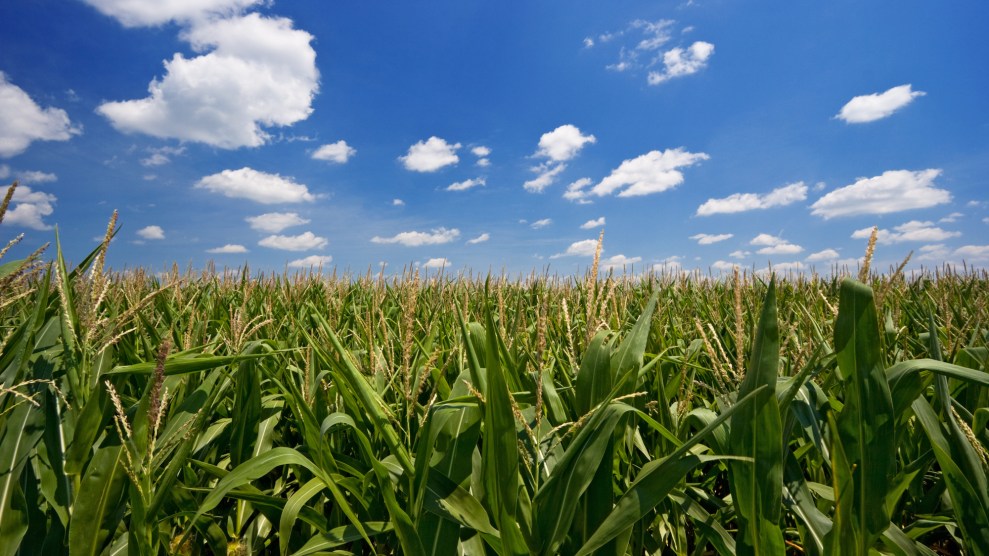 As judgment day approaches, on of the the most farm-intensive US states, Iowa, has emerged as a key prize. And the Donald Trump campaign is using a classic Iowa ag issue—a federal mandate that props up the production of ethanol from corn—as a pitchfork to wield at his opponent.

And the farm vote could be decisive. In a state with a population of 3.1 million, more than 210,000 people are employed on farms, according to the 2012 census.

While winning Iowa is far from enough to push Trump to national victory, he absolutely needs to win the state to have any reasonable shot at the presidency.

As recently as October 14, Democratic nominee Hilary Clinton had a 60 percent likelihood of defeating her Republican rival in the nation’s No. 1 corn-growing state, according to an analysis by the poll-tracking site FiveThirtyEight. But since then, polls there have drifted decisively in the reality TV veteran’s direction, and now his chances of defeating the former secretary of state in Iowa stand at 65.8 percent.

And while winning Iowa is far from enough to push Trump to national victory, he absolutely needs to win the state to have any reasonable shot at the presidency.

His campaign has been stepping up its effort there, reports Politico. On Tuesday, the Trump campaign announced a “coalition of over 200 industry leaders who have joined Iowa Agriculture for Trump,” which it called a “grassroots group of farmers, business owners, and innovators” who “have praised Donald Trump’s pro-agriculture policies.”

In the press release, the group claimed that “Hillary Clinton wants to eliminate the Renewable Fuel Standard,” a federal program implemented under George W. Bush. It ensures that more than a third of the US corn crop is diverted into ethanol production—an enormous benefit to the state’s corn farmers and the agrichemical companies that supply them. To back up the claim, Iowa Agriculture for Trump cited a 2015 email released by WikiLeaks from Clinton campaign chair John Podesta. In reality, Podesta calls for reforming the Renewable Fuel Standard in an “ethanol friendly” fashion in that email, not eliminating it.

It would be ironic if Trump, who claims he’s running because the Washington political class is so incompetent, were to win the presidency by vowing to preserve one of Washington’s stupidest boondoggles: corn ethanol. (Here’s Kevin Drum on the idiocy of ethanol; and here’s me.)

Iowa Agriculture for Trump also vowed the Republican candidate would “rein in” the “overzealous” Environmental Protection Agency and “eliminate the death tax that decimates family farms.” That’s a reference to the inheritance tax, which is applied only to estates valued at $5.45 million or higher and actually affects a tiny percentage of farms.

As I noted earlier this week, a recent poll by trade journal Agri-Pulse shows Trump with a commanding 55 percent to 18 percent lead among farmers nationwide. It doesn’t give numbers for Iowa alone, but it showed Trump leading by a similar margin among farmers in the Midwest region, which encompasses Iowa.

In other ag-related election news, one of Trump’s most high-profile ag supporters, Texas Agricultural Commissioner Sid Miller, called Clinton a “cunt” on Twitter on Tuesday. The mercurial politician quickly deleted the tweet, first claiming he was hacked, then falsely stating he had mistakenly retweeted someone else’s offensive post, and finally blaming a staffer for the faux pas. It’s the kind of ugly slip that’s well designed to outrage Clinton supporters and make Trump fans yawn, if not snicker.