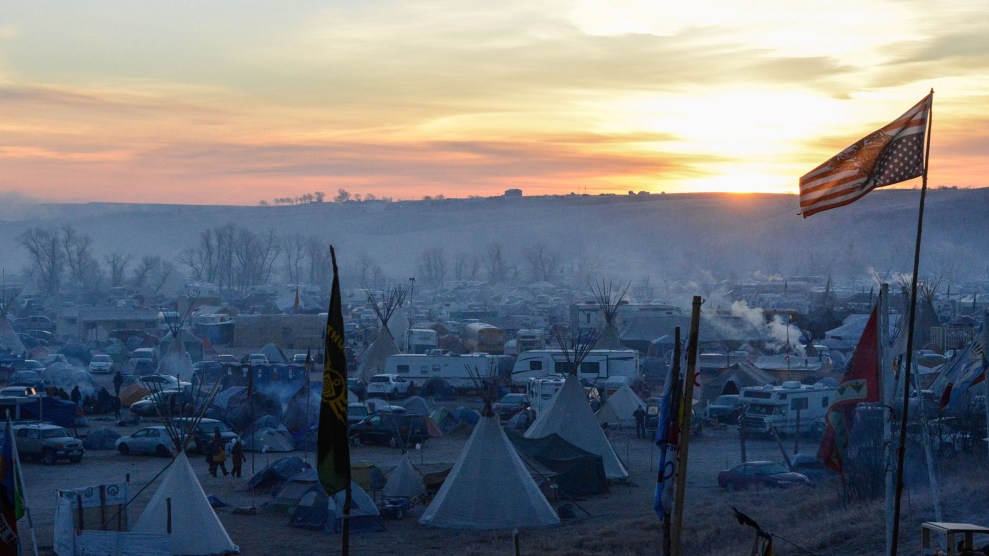 North Dakota Governor Jack Dalyrimple has issued an executive order demanding the “mandatory evacuation of all persons” from the main site of the Dakota Access Pipeline (DAPL) protests near the Standing Rock Sioux Reservation. The executive order, issued earlier today, requires all people located on land owned by the Army Corps of Engineers to leave immediately. They are forbidden from returning under penalty of arrest. The order could lead to the mass eviction and possible arrest of thousands of #NoDAPL protesters.

On Friday, the Army Corps of Engineers notified protesters that the agency planned to close the Ocheti Sakowin camp by December 5 due to safety concerns given the increasingly cold temperatures. This weekend, the camp was blanketed in snow and temperatures dropped to 26 degrees Fahrenheit. Two days later, in response to widespread criticism, the Corps backpedaled and said it had “no plans for forcible removal” and was “seeking a peaceful and orderly transition to a safer location.” The Army Corps promised to ticket protesters who refused to leave the Ocheti Sakowin camp.

The Ocheti Sakowin camp, one of three near the Standing Rock Sioux Reservation, is the only protest camp on land owned by the Army Corps of Engineers. Hundreds and sometimes thousands of protesters have lived there since August within sight of the DAPL construction site. In anticipation of a possible crackdown, the number of “water protectors” staying in teepees, tents, and RVs at the Ocheti Sakowin camp has swelled to as many as 15,000. Many more, including a caravan of Army veterans known as the Veterans for Standing Rock, were planning on arriving in coming days to show solidarity with the protesters. Protesters are also staying on private land near the pipeline construction site.

“All of a sudden they are so concerned for our safety? They weren’t worried while spraying everyone with cold water in freezing weather!”

Governor Dalyrimple’s executive order claims the mandatory evacuation is a result of concerns about the protesters’ safety due to dropping temperatures and snowstorms. “All of a sudden they are so concerned for our safety?” Jeane LaRance, a supporter of the anti-pipeline protests, said on Monday night. “They weren’t worried while spraying everyone with cold water in freezing weather!”

Last Sunday, Morton County Sheriffs sprayed a crowd of about 400 protesters with a water canon in sub-zero temperatures, drawing criticism from observers. According to Jade Begay, an activist with the Indigenous Environmental Network, 167 protesters were injured, and seven were hospitalized, including a woman whose arm was seriously injured by a “less-lethal” weapon.

“We don’t expect a forced removal or a sweep of this camp relatively soon,” Dallas Goldtooth, a leader of the Indigenous Environmental Network, said in a video posted from his yurt at the Ocheti Sakowin camp. “But we as a camp are prepared, are preparing, for any scenario for the protection and safety of our folks.”