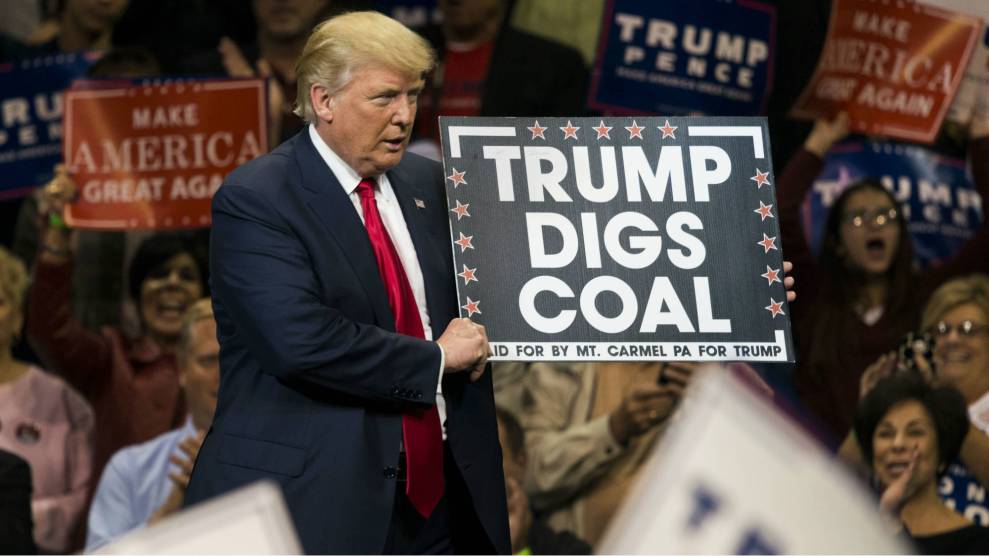 During the campaign, Donald Trump pledged to curb regulations on fossil fuel exploration, decimate the EPA, and bring back the coal industry. He’s called climate change a “hoax.” His environmental transition team is led by a climate change denier, and names being floated for secretary of energy and interior include an oil industry executive, a billionaire fracking entrepreneur, and Sarah Palin.

But environmental groups are bracing to fight back, and they insist the American public is behind them. Debbie Sease, senior lobbying and advocacy director at the Sierra Club, says her organization’s strategy lies in playing defense by filing legal challenges, galvanizing the public, and using the marketplace. If a coal field is going to be developed, for example, activists can make it as expensive as possible to comply with existing regulations and force the developer to deal with a public backlash, she says. Additional tools environmentalists can use include citizen lawsuits, grassroots organizing, and ballot measures at the state and local level focusing on everything from renewable energy standards to green transportation initiatives.

Any efforts by Trump and the Republican-controlled Congress to roll back the Clean Power Plan, Obama’s signature climate initiative, will be met with resistance, say the advocates. Trump will not be able to “snap his fingers and wish away regulations,” David Goldston of the Natural Resources Defense Council said at a press conference last week. “There’ll be a backlash if he tries to do that.”

“Coal is not coming back. If anyone hears otherwise from the president-elect…those are empty promises whose intention is to distract voters and to distract citizens away from any attempt to confront reality.”

Trump has also promised to withdraw the United States from the Paris climate agreement, an international accord aimed at slashing greenhouse gas emissions in an effort to limit global warming to 3.6 degrees Fahrenheit above pre-industrial levels. While formally abandoning the agreement might prove tricky, Trump could simply refuse to honor the pledges that President Barack Obama made as part of the deal, said Sease. But just because one head of state chooses not to enforce the agreement doesn’t mean others around the world will go along, she added. China, for example, has enthusiastically embraced the Paris deal. Trump “blowing up the Paris agreement or trying to blow it up” would only benefit China, argues David Doniger, director of the Climate and Clean Air Program at the NRDC. It would also cost the Trump administration leverage it needs for its other international priorities, such as trade policy and security issues.

Environmental advocates are also hoping that private industry will pick up some of the environmental slack left by a Trump administration. Fortune 500 companies such as Starbucks, Walmart, and Nike have already pledged to move toward 100-percent clean energy, regardless of what the government does or doesn’t do. On a World Resources Institute conference call with reporters following the election, other experts agreed. Nigel Topping, CEO of We Mean Business, a UK-based coalition that coordinates with businesses to reduce their carbon footprint, said that investors increasingly want businesses to take into account the financial risks they face as a result of climate change. Just last week, Topping pointed out, investors controlling more than $5 trillion dollars in managed assets called for a moratorium on Arctic drilling for oil and gas.

In addition, environmentalists point to Trump’s record of unpredictability, optimistically arguing that it’s not yet clear whether the president-elect intends to govern as he campaigned. (On some other high-profile issues, such as Obamacare, Trump has already begun to soften his campaign pledges.)

One of Trump’s signature promises, the return of coal jobs, simply won’t be happening, the advocates say. “Coal is not coming back,” said Michael Brune, executive director of the Sierra Club, at a press conference last week. “If anyone hears otherwise from the president-elect or any leader in Congress or at the state level, those are empty promises whose intention is to distract voters and to distract citizens away from any attempt to confront reality.” That’s because the dramatic decline in coal employment isn’t simply the result of environmental regulations, it’s also the consequence of increased mechanization and of competition from cheap natural gas. Sen. Majority Leader Mitch McConnell, a Republican from the coal state of Kentucky, acknowledged as much Friday when he said that repealing Obama’s coal regulations wouldn’t necessarily put many miners back to work. “We are going to be presenting to the new president a variety of options that could end this assault,” McConnell said, according to the Lexington Herald Leader. “Whether that immediately brings business back is hard to tell because it’s a private sector activity.”

Still, there are some things Trump can do to help kick-start coal production. Earlier this year, Obama put a moratorium on new coal leases on federal lands. Trump could easily reverse this rule through executive action, said Goldston at the NRDC press conference.

Even if environmentalists are ultimately able to block some of Trump’s plans, they will still be faced with a larger problem. Obama’s climate policies were only a good start—they didn’t get us anywhere close to averting catastrophic warming. As Sease pointed out, the accelerating pace of climate change means that the planet can’t afford four years of inaction. “Time is not our friend here,” she said.