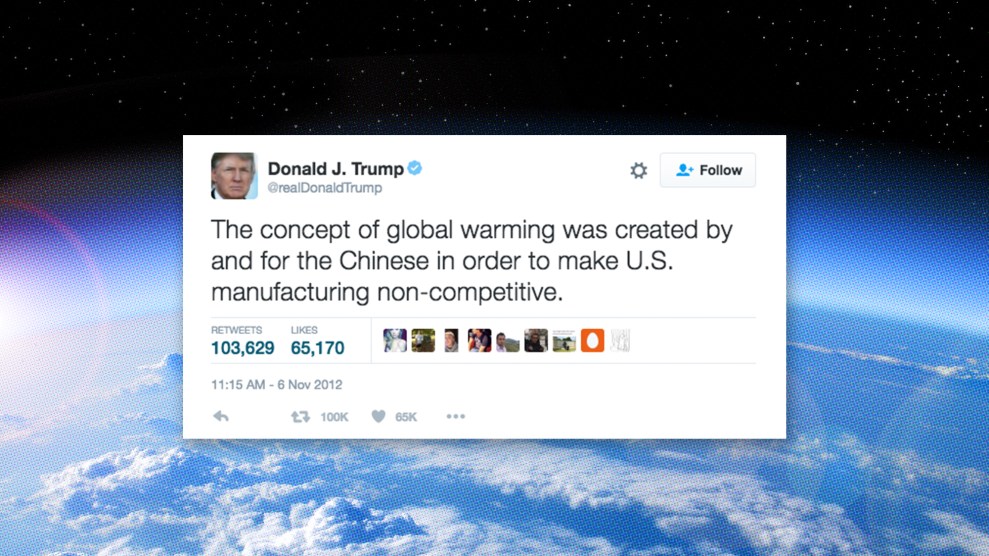 Though Donald Trump has been short on policy details, he’s been very clear about his feelings toward climate change. The president-elect has called global warming a “hoax” perpetuated by the Chinese. He’s also vowed to “cancel” the Paris climate agreement, the international commitment to reduce carbon emissions negotiated by the Obama administration last year, and Obama’s Clean Power Plan, which would limit emissions from power plants. He has vowed to open up federal lands to mining and fracking and to pull back on environmental regulations. He even proposed scrapping the Environmental Protection Agency. (Trump’s transition website now says that he plans to “refocus the EPA.”)

Ice storm rolls from Texas to Tennessee – I’m in Los Angeles and it’s freezing. Global warming is a total, and very expensive, hoax!

The people being floated for top energy and environmental roles in the Trump administration certainly fit the bill. Myron Ebell of the Competitive Enterprise Institute, an outspoken skeptic of the dangers posed by climate change, is leading Trump’s energy transition team. Lucas Oil founder Forrest Lucas and Sarah Palin are reportedly being considered for secretary of the interior, which includes oversight of parks and federal fossil fuel leases.

We reached out to author and activist Bill McKibben, who co-founded the environmental advocacy group 350.org, to ask about what all this means for the fate of the planet. In short: He’s worried that the new administration will make it even harder to deal with the “physics” of climate change—the indisputable scientific fact that no matter what our next president tweets, emissions are quickly adding up.

Mother Jones: So, Trump is going to be our next president. What does that mean for climate change?

Bill McKibben: There’s not a kernel of good news in this for environmentalism, and for climate change in particular. We were already way behind in this fight. And the chances of even beginning to catch up with physics required accelerating right now instead of lurching to a halt. It’s not that all progress will stop overnight—renewable energy is cheap now, and there’s a lot of momentum behind it, but not enough. There will be a huge increase in friction from the Trump administration. It’s going to be a field day for the fossil fuel industry, who will have their people everywhere [in the administration]. An industry that was back on its heels a few days ago is now back in the saddle.

MJ: Some environmentalists are hopeful that renewable energy will keep developing, since there’s already a big market for it. Thoughts?

“We don’t know exactly where all the tipping points are in the physical world for inescapable damage, but we’re clearly reaching close to some of them.”

BM: We’ll see. My guess is that liberating the fossil fuel industry to frack anywhere they want will drive down the rate at which we’re converting to sun and wind. And it’s entirely a rate problem at this point. If you were running a solar company you may be okay—you may be able to keep growing. The question for physics is: Can you grow fast enough to begin to catch up with the damage? We’re going to see the attempt to install a lot of fossil fuel infrastructure that will then be with us for the next 40 or 50 years. They’ve already dusted off plans for the Keystone pipeline. There are dozens of [proposed] pipelines, liquified natural gas ports, fracking wells—all the kinds of stuff that people have been fighting all over the place. There are hundreds of them. And each of those fights just got harder. The Dakota [Access Pipeline] fight may be a good example. It’s all the more important to fight it now and to push on, but they’ll have all the power to approve permits [to build the pipeline] in 70 days.

MJ: With all that in mind, what should environmentalists push for at a policy level?

BM: I don’t see a big opportunity at the federal level for policy fights. Between [Speaker of the House] Paul Ryan, [Senate Majority Leader] Mitch McConnell, and Donald Trump’s team, I don’t see a lot of openings for making real progress.

MJ: What about state and local level action?

BM: There’s plenty of room for working at the state and local level, and that’s likely what we’ll have to do a lot of—that’s what happened during the Bush administration. The difference is that it’s eight years later and we’re much further down the global warming path. There are many places where we need to fight important battles to make sure that customers have access to solar; we won an important battle in Florida [in Tuesday’s election]. Usually, when such things are on the ballot, we can win them. Solar power seems to be truly bipartisan in its appeal.

MJ: Myron Ebell, a famous climate denier, is running the energy transition team and is being shortlisted as the future head of the Environmental Protection Agency. As someone working on this for years and years, what do you make of that fact?

BM: I think it’s horrifying. It obviously isn’t the reason people were voting one way or another, but it may certainly turn out to be the longest-lasting incidental damage. The greatest short-term danger, it strikes me, is to immigrants in this country. And we’re going to have to figure out ways to protect very vulnerable people from harm. But the longest-term impact—the thing that will have turned out to have been the biggest deal over the next several thousand years—is what it means for the rate at which the planet warms.

MJ: If Trump dismantles the Clean Power Plan, what effect would that have?

“It will be impossible to coordinate action the way that it should be.”

BM: I don’t know how to quantify that exactly. I think the way to think about it is in terms of momentum and pace. Clearly this slows things down when we need to be speeding things up. We don’t know exactly where all the tipping points are in the physical world for inescapable damage, but we’re clearly reaching close to some of them. Massive melting in the Arctic and massive dead coral this year are good signs that things are out of whack. You can’t say, “Because we won’t have the Clean Power Plan, this and this and this will follow.” But you can say, “This makes it that much harder to get to the escape route.”

MJ: Do you think other countries will back out of their part of international climate agreements if we do?

BM: The idea that China and India will just abandon climate action is not true, because they’re doing it for more reasons than we are. Delhi is locked in a complete choking smog at the moment—they’ve had to close schools in one of the world’s biggest cities. They have their own reasons for needing to get off fossil fuels fast. So I doubt it will cause every other country in the world to stop doing this, but it will be impossible to coordinate action the way that it should be.

MJ: Does the environmental movement need to change its messaging to be effective?

BM: I think we could be doing more to talk about [climate change] in terms of jobs. I wrote a long piece this summer for the New Republic about a World War III-scale mobilization to create jobs across the Midwest—exactly the areas where Clinton lost.

MJ: Well, this has been a pretty depressing conversation. Any reason for hope?

BM: I don’t think there’s any way to finesse the administration into doing the right thing. The good news is that we’ve built a big movement; the bad news is that it’s clearly not big enough yet. So I guess that the main task is to keep building it. I can’t think of any other path forward.