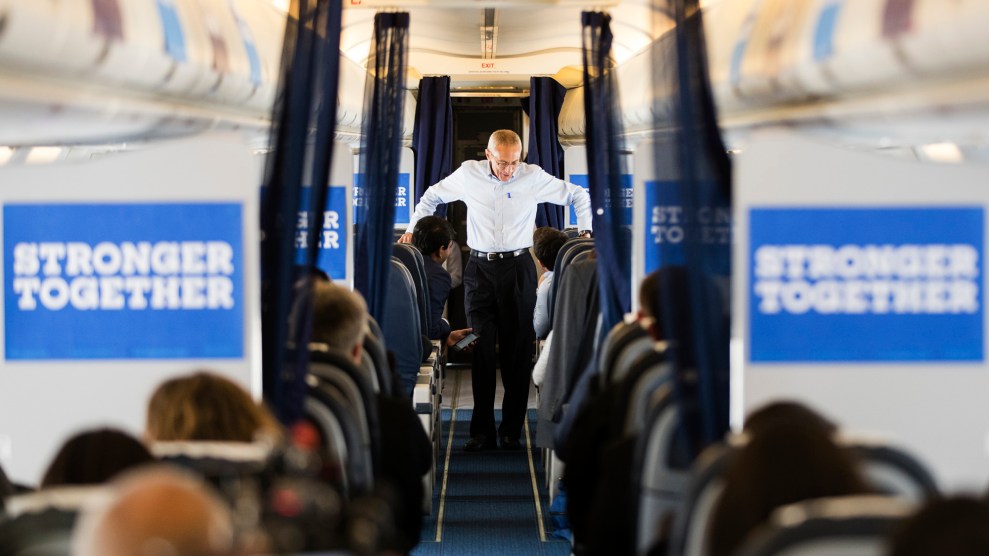 Last week couldn’t have been an easy one for Clinton campaign chief John Podesta. On the one hand, his candidate continued to increase her polling lead over Republican Donald Trump. But on the other, he had to watch a steady drip of revelations from his hacked campaign emails as they were posted online by WikiLeaks.

In an exclusive interview with Grist conducted as revelations were still pouring out last week, Podesta sought to assure climate hawks of the sincerity of Hillary Clinton’s commitment to fighting climate change. “She’s put out an extremely robust agenda that goes beyond what President Obama has pledged,” he told Grist. (The interview was scheduled before the first of the WikiLeaks releases and not in response to them.)

“These are big, bold plans,” Podesta said. “It would exceed the goals that the United States took on in the Paris negotiations.”

Climate hawks have long been suspicious of Clinton as a moderate who only adopted some of their positions in response to Bernie Sanders’ primary challenge and pressure on the campaign trail.

For the most part, Podesta’s hacked emails reveal about what you would expect: the professional sausage-making of a modern presidential campaign. But there are details that look bad, too, such as an account that came out over the weekend of Clinton saying she’s “at odds with the most organized and wildest” of the environmental movement—those who want to keep all fossil fuels in the ground—and that they should “get a life.”

House Minority Leader Nancy Pelosi was forced to defend that last one to CNN’s Jake Tapper on Sunday, after he said said, “‘Get a life,’ you know, that’s kind of a harsh statement to say to environmentalists.” Pelosi stuck up for Clinton’s commitment to climate action.

It doesn’t help that hardcore climate hawks have long been suspicious of Clinton as a moderate who only adopted some of their positions in response to a strong primary challenge from Sen. Bernie Sanders and pressure from climate activists on the campaign trail. Last week, Clinton attempted to make the issue her own by campaigning in Miami with former Vice President Al Gore. Her campaign followed that up with an ad contrasting her climate stance with Donald Trump’s.

The WikiLeaks dump also reveals internal exchanges showing that the Clinton team carefully weighed the political implications of her stance on the Keystone XL pipeline, including whether coming out in opposition to the proposal (which was eventually rejected by President Barack Obama) could be used to assuage environmentalists’ concerns about the candidate.

That kind of political calculation is common in a campaign—but it normally doesn’t see the light of day. Podesta sought to assure Grist that a President Clinton would be a strong force against the expanded use of fossil fuels.

“The truth is what she has put forward in this campaign,” Podesta said, before rattling off some of Clinton’s ambitious proposals for clean energy, including the installation of half a billion solar panels by the end of her first term, powering every home in America with renewable energy within 10 years, and cutting energy waste in every sector of the US economy by a third.

“The discussions that we had inside the campaign” about how to handle the KXL pipeline, Podesta said, “were really just about how to communicate the conclusion she had come to, which was that Keystone was not in the interest of the United States.”

If Keystone was the defining energy infrastructure issue of the Obama presidency, Clinton could face a challenge of her own in the form of the Dakota Access pipeline, which is being blocked by a large and growing coalition of native groups and their allies. Podesta was vague when Grist questioned him on how Clinton would handle the construction project, which the Obama administration has put on hold for further review. “I think she believes that stakeholders need to get together at this point. It’s important that all voices are heard.”

“While we would certainly welcome a more climate-friendly Congress…this program can be carried out with aggressive action by the president.”

Some former members of the Obama administration, including Heather Zichal, who stepped down in late 2013 as the president’s chief climate and energy adviser, have suggested that their boss made so much progress on the regulatory front that there would be little a new president could do to combat climate change without a friendly Congress. Podesta disagreed with that assertion.

“I don’t think we have reached the limit of executive action,” he said. “Take reductions in methane: President Obama has taken action to reduce emissions from new sources, but he has not tackled the problem of existing sources.”

Clinton has also proposed incentives that would encourage states and cities to take more climate action on their own, beyond what the federal government can do, Podesta said. “While we would certainly welcome a more climate-friendly Congress—and the way Donald Trump’s going, maybe we’ll get one—this program can be carried out with aggressive action by the president.”

For hardcore environmentalists, one of the most troubling aspects of Clinton’s energy rhetoric is her references to natural gas as a “bridge fuel.” The “get a life” WikiLeaks revelation from this weekend recounts a 2014 meeting between Clinton and the building trades union in which she said she wanted to defend natural gas and fracking—but only “under the right circumstances.”

Podesta said Clinton’s use of the “bridge” term means she wants to replace coal with natural gas and she wants to repeal the loophole that exempts fracking operations from the Safe Drinking Water Act: “We need to produce, transport, and distribute it in a way that has the smallest environmental footprint, which means that we need to require additional regulation, including closing the Halliburton Loophole to protect our water supply, including reduction of methane in order to alleviate the short-term effect of methane pollution as a greenhouse gas.”

Podesta wouldn’t, however, go so far as to commit Clinton to some of the goals of the “keep it in the ground” movement, which has gained standing in recent years with wins such as KXL. For instance, he wouldn’t tell Grist whether Clinton will designate the Arctic National Wildlife Refuge as a national monument in order to put it permanently off-limits to drilling, as activists have called for, but he underscored Clinton’s plans to protect ecologically sensitive areas from fossil fuel production.

“That will be something that we will have to consider when she’s elected,” Podesta said. “Very early in the campaign she came out against Arctic drilling. She’s taken Atlantic drilling off the table, and the president has followed up on that. Her argument is that we should really be looking to public lands and waters as a means of pursuing more renewable energy. That includes a tenfold increase in production of renewable energy from public lands and waters.”

Podesta also argued that Clinton would lead international efforts to combat climate change, continuing a role she played as Obama’s secretary of state.

“She put climate front and center with respect to our relationship on the US-China bilateral relationship that came to fruition in the work that President Obama has been able to do with China’s President Xi,” Podesta said. “The bilateral agreement with the US and China on climate has been an important driver of the global commitment and the Paris agreement.”

Donald Trump, of course, has suggested climate change is a Chinese hoax and threatened to “cancel” the Paris agreement. Podesta said Clinton plans to keep using these words against him in the last three weeks of the campaign. Bottom line, he said: “We’re running against a guy who is denying climate change.”