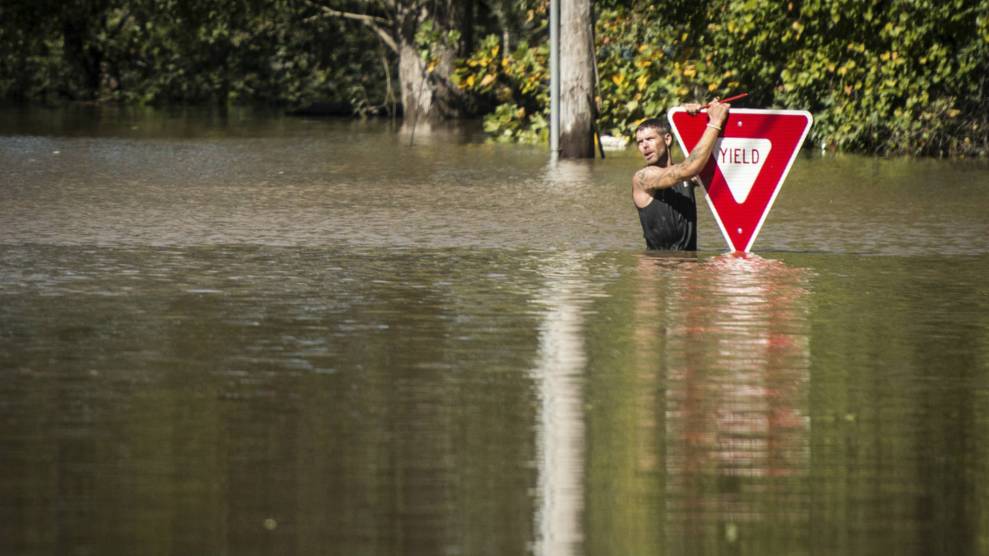 A man holds onto a sign after trying to swim out to help a truck driver who was stranded in floodwater from Hurricane Matthew in Hope Mills, North Carolina, on Sunday. Both people were rescued.Andrew Craft/AP

As many Americans were focused on the increasingly bruising presidential campaign, Hurricane Matthew moved up the eastern seaboard over the weekend, bringing flooding and devastation with it. Matthew, which was downgraded to a post-tropical cyclone Sunday, has left at least 23 people dead in the United States; it killed 1,000 people in Haiti after slamming into the Caribbean nation last week.

Here are some harrowing photos and videos of the destruction:

Death toll in Haiti as a result of #HurricaneMatthew has soared to more than 300, officials say. https://t.co/IbzC6kACCx pic.twitter.com/8Gn8DHNdaN

“They always ignore the people of this town.”#HurricaneMatthew has torn through Cuba—and people are picking up the pieces with little help pic.twitter.com/cItCetyEjp

NOW: #Bahamas flooding after #HurricaneMatthew. Standby for a LIVE report on @nbc6 pic.twitter.com/9t7D9wpiWO

Views of the closed A1A highway, washed out by #HurricaneMatthew in Flagler Beach, Florida from @jewelsamad pic.twitter.com/vYUD7vWMBI

Millions of coastal residents are being urged to flee inland as #HurricaneMatthew nears Florida. https://t.co/Zvim1meOY9 pic.twitter.com/6hQyzBspRd