NPS/Planet Pix via ZUMA WireSmoke rises from the Maple wildfire part of the Buffalo Complex fires burning in Yellowstone National Park in August near Gneiss Creek trail in Wyoming.


This story was originally published by Slate and is reproduced here as part of the Climate Desk collaboration.

The town of West Yellowstone should have spent last week focusing on the influx of tourists in town to celebrate the 100th anniversary of the founding of the National Park Service, the culminating huzzah of the much-publicized park centennial that’s been taking place all year.

Instead, they’ve been worrying about fire.

The Maple Fire started on August 8 and has burned 33,000 acres inside the park, which makes it the biggest fire inside the park boundary since the massive fires of 1988. Two days before the 100th birthday celebration (last Thursday), smoke hung low in the streets, the sunrise was red and apocalyptic, and the entire town smelled like a campfire. As the fire continued to grow, air quality was downgraded from “unhealthy for sensitive groups” to just plain “unhealthy,” and nervous tourists could be seen sporting surgical masks. The guy who gave me my motel key complained about his lungs. “You know they’re not even fighting this fire?” he said, incensed. “Not even trying to put it out.” Several bus tours had already been canceled because of concerns about the smoke. On Tuesday, the park service announced that it would close the southern entrance to the park because of another fire burning in the Grand Tetons. “There has definitely been an economic impact, though we don’t know the extent of it yet,” West Yellowstone’s town manager, Daniel Sobolsky, said. “We have such a short season here that every day makes a difference.”

Earlier that week, I took a ride through the smoldering park with Deb Schweizer, a park-service public-information officer with a dark bob and a silver nose stud. I asked her if the fire was inconveniencing the NPS’s big birthday plans. (Yellowstone actually predates the NPS, having been signed into being all the way back in 1872, but it was still celebrating the centennial.) “I’m sure in some ways it is,” she said. “I think in other ways it’s awesome.” As scary as fires may seem, they’re a crucial part of forest ecology. “This is an agency that is really about allowing natural processes to prevail and creating natural ecosystems that function the best way possible,” Schweizer said, gesturing at the plume of smoke rising above the mountains. “And this is it.”

When the National Park Service was founded 100 years ago, its stated mission was to “promote and regulate use” of the parks in order to both “conserve the scenery” and “provide for the enjoyment of the same.” Those dual missions can come into conflict, however—such as when a wildfire in the park disrupts visitors’ vacation plans.

So far, the NPS’s response to the Maple Fire has been: Let it burn. Such a passive take would’ve been unheard of during the first half of the 20th century, when the standard forest service policy was to attack even the smallest wildland fires with an overachiever’s zeal and the diligence of Smokey the Bear. The thinking then was that fire was environmentally destructive (and that it damaged valuable logging resources). But as fire science became more sophisticated, scientists began to understand that these conflagrations actually played a key natural role in renewing the forest ecosystem; the wake of a fire left space for new, different vegetation and helped support biodiversity. In addition, all those little fires, it turned out, also cleared out fuel, so the overzealous fire suppression had just set us up for bigger, more destructive fires. “Removing fire from an ecosystem will eventually catch up with you,” Schweizer said.

By the 1980s, when we stopped putting out every forest fire, we realized what we’d done: Now when fires started, they had all the fuel they needed to burn more extensively. Plus, they were exacerbated by the hotter, drier conditions attributed to climate change. “If you talk to folks who fought fires even 30 or 40 years ago, a 20,000-acre fire was a big deal,” Schweizer said. “They’re pretty standard now.”

Some residents of West Yellowstone, particularly those whose houses are within a couple of miles from the fires, have been outspokenly critical of the park system for not being more proactive about its firefighting, in part because memories of past conflagrations still linger. When dozens of fires broke out in Yellowstone in the summer of 1988, park policy was finally aligning with the pro-fire science, so naturally occurring fires in wilderness areas were allowed to burn themselves out as long as they didn’t threaten any people or buildings. But the region was in the middle of a persistent, severe drought, and the fires quickly got out of hand: 28 years ago this week, howling winds churned several separate blazes into a firestorm that gobbled up more than 150,000 acres of parkland in a single day, an event that’s now known as Black Saturday. When the 9,600 firefighters brought in to battle the blaze weren’t enough, the government called in six Army and Marine Corps battalions to assist. On September 8, for the first time in its history, Yellowstone was closed to visitors. The fires weren’t completely put out until November, and by that point, they had burned more than 1.1 million acres (three-quarters of that within the park) and cost $120 million. The massive effort expended on fighting the fires was also largely futile, the park’s then-fire suppression specialist Rick Gale concluded afterward: “Although politically unfeasible, the best use of suppression resources for most of the summer of 1988, except for structural fire protection, would have been to send them home until the weather abated, extreme fire behavior subsided, and some sort of effective suppression action could have been taken.”

We can’t treat forest fires as fully natural because we have very little wilderness left that is actually untouched by human development.

In 2009, the government released a new wildland fire management policy that advocates neither full suppression nor letting natural fires burn completely uncontained. Instead, second only to protecting the safety of firefighters and the public, the goal is “to help achieve ecosystem sustainability, including its interrelated ecological, economic, and social components.” Those “social components” would be the houses, businesses, and tourist attractions that are embedded within our so-called wilderness. The subtext of the 2009 report is the understanding that we can’t treat forest fires as fully natural because we have very little wilderness left that is actually untouched by human development. Between 1990 and 2000, 60 percent of all new housing units in the United States were built in what the forest service calls “the wildland-urban interface,” or places where human habitation “meet or intermingle with” undeveloped wildland. That’s only going to increase as baby boomers retire, often to places with attractive natural amenities. When officials decide which fires to suppress (and how aggressively to do so), they are increasingly having to take people into account. The expansion of the wildland-urban interface is one reason the costs of firefighting have skyrocketed in recent years, as firefighters have to strategically deploy resources to protect rural homes.

Americans want to live (and vacation) in natural places. But they aren’t necessarily prepared to deal with the consequences of nature itself.

This has been evident in residents’ reactions to the fires. A few miles north of West Yellowstone, at a spot where the road opens up to provide an excellent view of the plume of smoke hanging over the park, someone has tagged a highway sign: “NPS SUCKS! SMOKEY SEZ PUT OUT THE FIRES.” Residents of West Yellowstone and its environs are not only anxious that the fire will change course and gobble up the town, but also frustrated that even if things go exactly according to plan and the fire burns itself out over the next few weeks, the smoke and bad press will put a damper on the tourist season—a crucial revenue source for the town.

Last Tuesday, the NPS held a public meeting to explain the situation and help quell residents’ fears. When a surprise guest was announced—Montana Sen. Steve Daines—an actual murmur ran through the crowd, the first time I’ve seen that cliché manifest in real life. Daines, a Republican who took office last year, defended the park’s management of the fire, but also reassured listeners that he understood their concerns about the need to protect “resources” and “assets” both inside and outside the park boundary. “Our highest priority is to protect the structures and also to make sure the tourism economy is not affected. My parents had a tourism-sensitive business,” he said. “I understand the difficulty.” 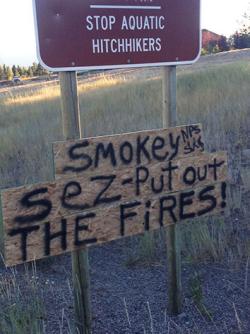 Yellowstone tourists are notorious for causing traffic jams inside the park by rubbernecking at herds of bison; this week when they do that, they’ll be able to get snapshots of billowing clouds of smoke in the background, too. I spoke with a couple of firefighters on loan to the park from the Missoula City Fire Department. Their Nomex fire gear looked suspiciously clean—because, I learned, they hadn’t been anywhere near the flames yet. Instead, they were trying to get the fire voyeurs to keep moving. “We’re just directing traffic, trying to get some of the lookie-loos to move along,” fireman Derek Mullins told me.

Inside the park, the bison are photogenic symbols of the long-gone American frontier; when they roam outside the park limits, they risk getting shot by angry ranchers who don’t want their grazing grounds intruded on. Wildfires are similarly disrespectful. They burn whatever’s in their way—and, given the compounding effects of climate change and increasing development in wilderness areas, they’ll likely only continue to cause trouble.

With the park service centennial, we’re rightfully celebrating our national experiment in protecting certain wild areas. But even as we pat ourselves on the back for this endeavor, we must reconcile with the implications of merging our homes with forces much greater than our own. The tricky thing about wilderness is that it doesn’t always want to be contained.