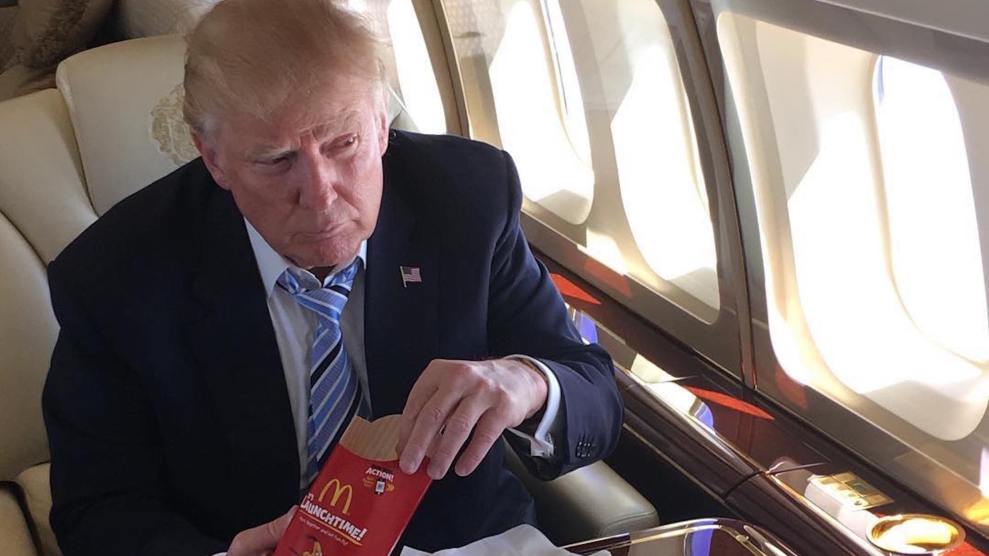 Donald Trump hunkers down with fast food on his private jet. <a href="https://www.instagram.com/p/BF4raEHmhag/">realdonaldtrump</a>/Instagram

Even with these allegedly Draconian rules in place, food-borne illnesses sicken 48 million Americans annually, leading to 128,000 hospitalizations and 3,000 deaths, the Centers for Disease Control and Prevention estimates. Yet according to Trump, making America great again means freeing food corporations to regulate themselves.

Or does it? Kevin Drum pulled the below quote from Trump’s fact sheet, linking to this Trump campaign URL. Salon and The Hill also quoted from the same passage:

The FDA Food Police, which dictate how the federal government expects farmers to produce fruits and vegetables and even dictates the nutritional content of dog food. The rules govern the soil farmers use, farm and food production hygiene, food packaging, food temperatures, and even what animals may roam which fields and when. It also greatly increased inspections of food “facilities,” and levies new taxes to pay for this inspection overkill.

But when you click on that link now, you get a blank document. 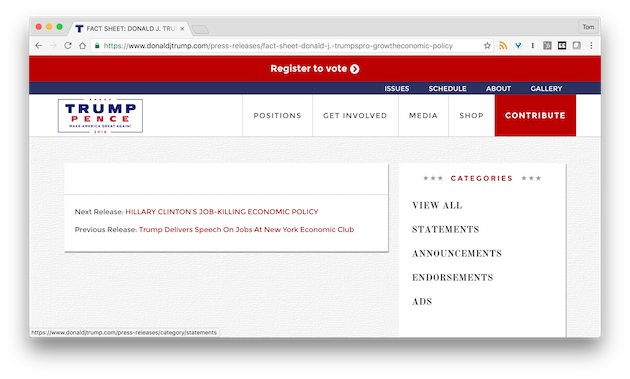 However, the Trump website offers a fresh link to an economic policy fact sheet very similar to the one Drum analyzed—only this one is completely scrubbed of any references to food police, the FDA, or food at all.

So what gives? Why did the Trump campaign vow to dismantle food safety regulation, only to quickly go silent on the topic? The campaign has not returned my request for an explanation. Maybe someone on the inside put the following facts together: a) The Donald famously loves brand-name fast food; b) some of the worst food-poisoning outbreaks ever have involved fast-food chains; and c) that federal food-safety regulation has made such dining considerably less hazardous in recent years. Something for Trump to mull next time he chows down on McDonald’s from the comfort of his private jet.