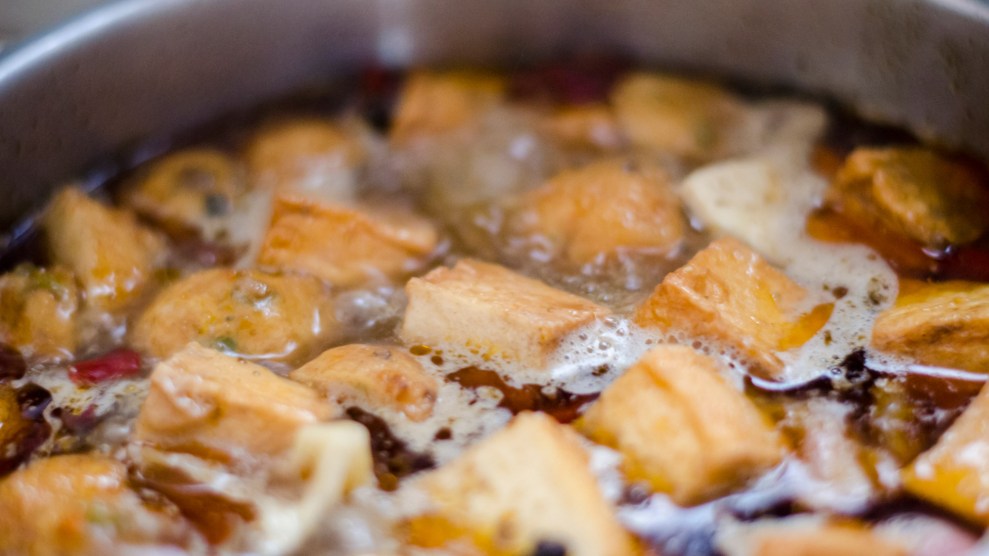 Listen to this story on Bite, Mother Jones’ new food politics podcast. You can access all our episodes here, or subscribe in iTunes, Stitcher, or via RSS.

In the back of an industrial park in Silicon Valley, Dewi Sutanto stands over a simmering pot of red and bright orange sauce. It’s over 80 degrees in the kitchen, and stacked food containers line the counter. Sutanto has filled about half of the day’s orders, mostly with beef rendang, a clove and cardamom-infused slow-cooked meat. She wipes her hands on her apron before lifting the lid off a steaming pot of white rice.

Sutanto, originally from an island near Sumatra, Indonesia, lives in Milpitas, California. When she moved to the United States 40 years ago, she brought her family’s recipes cooked for friends. Word of her food spread quickly among the Indonesian community, and Sutanto started a small catering business. But now, instead of relying on word-of-mouth to connect with customers, she’s using an app. 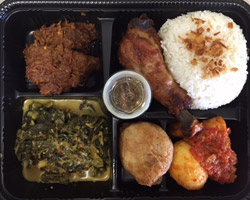 Nasi padang is a staple of Sumatra, a dish of steamed rice and miniature bites of fish, vegetables, and spicy meat. Photo courtesy TaroBites.com

Taro, named after the root vegetable commonly used in African and South Asian food, allows users to order straight from cooks who specialize in cuisine from regions around the world. About 50 chefs offer menus that range from Moroccan and West Indian, to Sumatran and Chinese fusion. Silicon Valley is in many ways the perfect place for these chefs to find loyal customers: Busy tech workers, often immigrants, don’t have time to cook but often yearn for the authentic tastes of home. Out of Sutanto’s estimated 300 customers, 250 are from Indonesia.

Krisha Mehra co-founded Taro earlier this year. He said after watching his aunt try to juggle orders for her Indian food via text message, he wanted to make the process easier—for her and her customers. She never wanted to open her own eatery, Mehra said; she just enjoyed making home-cooked Indian food.

“If somebody really cooks well, opening a restaurant is one of the worst things they can do for themselves,” Mehra said, citing high start-up costs and long hours. “A lot of [the chefs] are stay-at-home moms or people who have a family…they’re adventurous enough to try a business out once a week.”

Now that more people are finding Sutanto through the app, she admits there have been a few changes to her traditional menu, especially when she cooks for non-Indonesians: “Everyone says that my food is too spicy,” she says with a laugh.