Nearly 25 years ago, a legal clerk named Erin Brockovich discovered a carcinogen called chromium-6 contaminating the water of her town of Hinkley, California—leading to a yearslong environmental crusade, documented in the eponymous 2000 movie.

This week, a report from the Environmental Working Group (EWG) found that about two thirds of the American population—218 million people—are drinking water contaminated with potentially unsafe levels of the chemical.

In an interview with Mother Jones, Brockovich said she was infuriated but not surprised. “I used to think Hinkley was a one-off,” Brockovich said with a chuckle. “I didn’t realize that Hinkley’s everywhere. It’s beyond frustrating.” 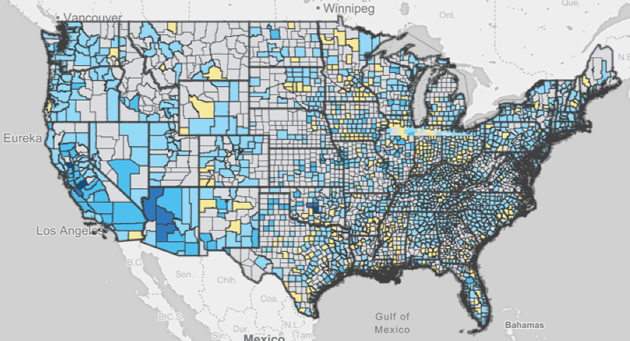 Chromium-6, rare in nature, is a heavy metal used in a variety of industrial processes, from steel-making to energy generation. The contaminant is fueling an ongoing controversy in North Carolina, where residents are accusing Duke Energy of polluting the local drinking water supply.

The Environmental Protection Agency classifies chromium-6 as an “emerging contaminant,” meaning that utilities test for it but aren’t held to a legal limit. Of 81 emerging contaminants monitored in the past 20 years, only perchlorate, a rocket fuel ingredient, has been recommended for regulation.

Meanwhile, evidence of chromium-6’s toxicity has been mounting. A two-year study by the National Toxicology Program released in 2008 found that the compounds cause cancer in mice and rats. The program’s 2014 report on carcinogens says they are “known to be human carcinogens.” The Agency for Toxic Substances and Disease Registry, which oversees toxicity of Superfund sites, has found chromium-6 to be “associated with respiratory and gastrointestinal system cancers.”

In 2010, California health officials set a “public health goal” of 0.02 parts per billion of chromium-6 in tap water, saying a lifetime of consumption at or below the goal would pose a “negligible” cancer risk. Four years later, California became the first—and, to date, only—state to set a legal limit for chromium-6. The limit, 10 parts per billion, is 500 times the initial public health goal. EWG attributes the discrepancy to “aggressive lobbying by industry and water utilities” that “exaggerated the cost of treatment and undervalued the benefits of stricter regulation.” Similar situations have played out in New Jersey and North Carolina, where drinking-water agencies set a public health goal (0.06 parts per billion in both cases) but faced industry pushback when they tried to set a legal limit.

EWG found that of more than 60,000 tests reported to the EPA between 2013 and 2015, 75 percent of water samples had some level of chromium-6. Two-thirds of Americans drink water with tests above the state’s “health goal.” About 7 million people drink water from a utility with at least one test above California’s legal limit. Of the major cities, Phoenix, Arizona, had by far the highest levels, followed by St. Louis, Houston, and Los Angeles.

And yet, federal regulation of chromium-6 isn’t likely anytime soon, experts say. The Environmental Protection Agency’s assessment process on the compound has been stalled for years, largely because of chemical-industry lobbying. In 2011, the agency wrote a draft risk assessment of chromium-6—the first step toward potential future regulation—finding that the compound was “likely to be carcinogenic to humans.” But the draft assessment was never officially released; the American Chemistry Council, the chemical lobby’s primary industry group, requested an extension until studies funded by the Council and the Electric Power Research Institute were complete. The updated draft risk assessment is now expected next year, after which there will be an extensive comment period and likely a yearslong review process.

People “have this idea that if there’s a [chromium-6] problem, they’d let us know,” said Brockovich. “Superman’s not coming.”