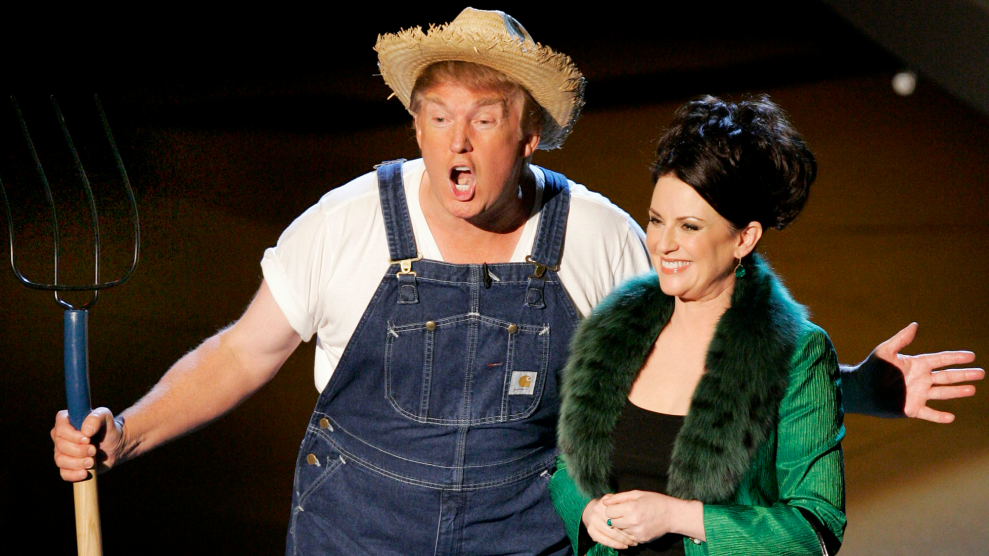 #TBT to that one time when Donald Trump joined actress Megan Mullally in a duet of the "Green Acres" theme song at the 2006 Emmys. Mark J. Terrill/AP Photo

Like a jittery upstart on The Apprentice, Donald Trump is looking like an unlikely contender for the prize he’s groping for. To beat the long odds stacked against him in the presidential election, the mercurial reality TV star will have to conquer a chunk of real estate quite distinct from the vast gambling dens and condo castles he’s used to: Iowa.

While the US corn, soybean, and hog capital isn’t a big enough prize on its own to push the GOP nominee to victory, “there is no realistic path to the presidency for Trump without Iowa’s six electoral votes,” as the Washington Post recently reported. Ohio, too, has emerged as a necessary but insufficient piece of the electoral map for Trump.

So the lifelong urbanite is plunging those famous fingers of his into the muck of farm-state politics. Trump reportedly declined to mount a Harley and participate in the ride portion of Iowa Republican Sen. Joni Ernst’s “Roast and Ride” event at the state fairgrounds in Des Moines last week, but he did deliver a red-meat speech pandering to some of the baser urges of the Corn Belt’s agribusiness interests.

Here are some highlights:

• He thundered against government regulation of farming practices—a highly contentious topic in a state where waterways and drinking water are routinely polluted by runoff from farms. “We are going to end the EPA intrusion into your family homes and into your family farms, for no reason—what they’re doing to you is a disgrace,” he declared, adding without citing evidence the unlikely claim that “many” Iowans have lost their farms to overzealous enforcement of environmental standards.

• To the crowd’s delight, Trump vowed to revoke the Obama administration’s Waters of the US Rule, which gives the Environmental Protection Agency greater authority to regulate water pollution. Hillary Clinton, by contrast, “wants to shut down family farms just like she wants to shut down the miners and the steelworkers… through radical regulation,” he warned.

• Yet Trump pledged support for an infamous federal government boondoggle: a 2007 law that mandates that a huge portion of the US corn crop be diverted into ethanol production. “President Obama lied to you about his support for the Renewable Fuel Standard, and you can trust Hillary Clinton even less,” he said. In reality, Obama has never wavered in his support for the corn-ethanol mandate, and Clinton, too, supports it—as does one of her main ag policy advisers, USDA chief Tom Vilsack, a former governor of Iowa.

• Trump promised to “end double taxation of family farms at death”—a reference to the estate tax. Repealing the so-called death tax is a perennial applause line for GOP politicians, and Trump’s proclamation drew an enthusiastic response. It’s hard to figure out why the issue still resonates with farm audiences—after years of rollbacks, the tax now applies only to estates valued at $5.45 million or higher, and affects fewer than 1 percent of US family-owned farm operations, according to the US Department of Agriculture.

On two other issues, Trump declined to pander to the ag crowd during his Iowa speech. On immigration, the candidate has maneuvered himself into a tight corner. Anti-migrant rants fueled Trump’s blitz through the primaries, appealing to the nativist impulses of the GOP base. But Big Ag relies heavily on immigrants for labor, from the fruit and vegetable fields of California and Florida to Iowa’s industrial-scale hog slaughterhouses. Perhaps in deference to such business interests, Trump has on some recent occasions softened his stance on immigration. Underlining these tensions, several members of Trumps 64-person ag policy committee support a much softer stance on migration, the Washington Post recently reported. But in his Iowa speech, Trump for some reason reverted to old ways, fulminating against “criminal illegal immigrants” and vowing yet again to “build a great border wall.”

The other issue is the Trans-Pacific Partnership, the controversial trade deal championed by President Barack Obama and prized by Big Ag because it pries open Asian markets for US-grown seeds, grain, and meat. Trump has been denouncing the TPP on nativist grounds since he launched his campaign. Perhaps because Iowa stands second only to California in agricultural exports, Trump held his tongue on the TPP during his speech, declining to mention trade at all.

Perhaps to smooth over those immigration and trade rough spots with the Big Ag community, the Trump campaign deployed the chairman of its Rural Advisory Committee, Charles Herbster, to address the Ohio Cattlemen’s Association’s annual roundup in Jackson, Ohio, last Saturday. Herbster, a Nebraska rancher and multilevel-marketing magnate, did not return calls asking for details of his presentation. According to Elizabeth Harsh, executive director of the OCA, Herbster “answered many questions from OCA members,” ranging from “trade and TPP to health care and immigration.” She added, “OCA’s members were very interested and engaged in the discussion,” but she declined to say more.

In a brief interview a month ago, Herbster acknowledged that he’d been getting calls from farmers concerned about Trump’s crusade against the TPP, and insisted that a President Trump would renegotiate trade deals in a way that keeps ag exports booming.