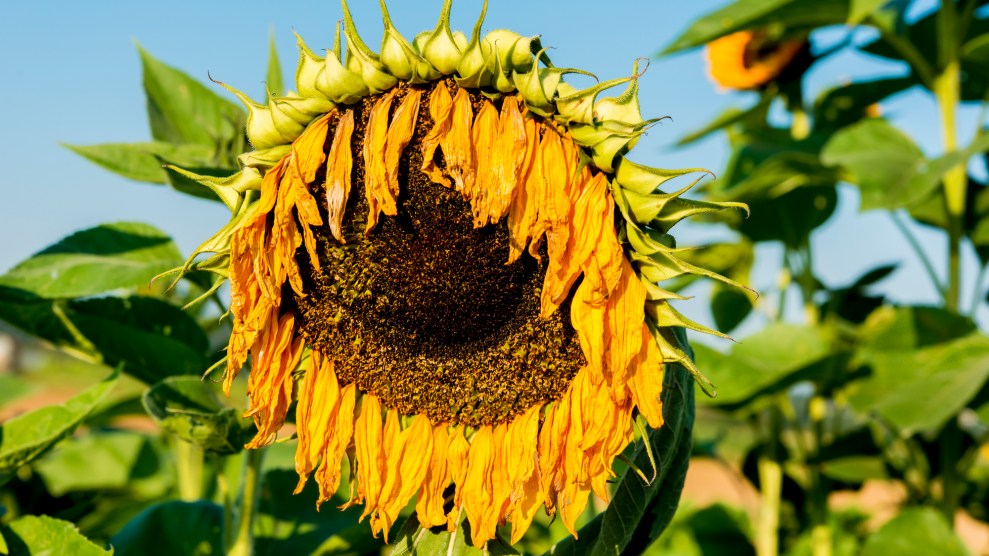 A couple of weeks ago, the Environmental Protection Agency announced it had gotten an “unusually high number of reports of crop damage that appear related to misuse of herbicides containing the active ingredient dicamba.” Complaints of drooping and often dead crops appeared in no fewer than 10 states, the EPA reports. In Missouri alone, the agency says it has gotten 117 complaints “alleging misuse of pesticide products containing dicamba,” affecting more than 42,000 acres of crops, including peaches, tomatoes, cantaloupes, watermelons, rice, peas, peanuts, alfalfa, cotton, and soybeans.

The state’s largest peach farm, which lies near soybean-and-cotton country, has suffered massive and potentially permanent damage this year—and suspects dicamba drift as the culprit, reports the St. Louis Post-Dispatch.

The dicamba products currently on the market tend to vaporize in the air and drift far away from the land they’re applied on, killing other crops.

The trouble appears to stem from decisions made by the Missouri-based seed and pesticide giant Monsanto. Back in April, the company bet big on dicamba, announcing a $975 million expansion of its production facility in Luling, Louisiana. The chemical is the reason the company launched its new Roundup Ready Xtend soybean and cotton seeds, genetically engineered to withstand both dicamba and Monsanto’s old flagship herbicide, glyphosate (brand name: Roundup). Within a decade, the company wrote, the new GM crops will proliferate from the US Midwest all the way to Brazil and points south, covering as much as 250 million acres of farmland (a combined land mass equal to about two and a half times the acreage of California)—and moving lots of dicamba.

The plan is off to a rough start—which brings us back to those drooping crops in soybean and cotton country. The company elected to release Roundup Ready Xtend soybean and cotton seeds this spring, even though the EPA has not yet signed off on a new herbicide product that combines glyphosate and a new dicamba formulation. That was a momentous decision, because the dicamba products currently on the market are highly volatile—that is, they have a well-documented tendency to vaporize in the air and drift far away from the land they’re applied on, killing other crops. Monsanto’s new dicamba, tweaked with what the company calls “VaporGrip” technology, is supposedly much less volatile.

The trouble is that farmers have been planting glyphosate-tolerant cotton and soybeans for years, and as a result, are dealing with a mounting tide of weeds that have evolved to resist that ubiquitous weed killer. So they jumped at the new seeds, and evidently began dousing crops with old dicamba formulations as a way to knock out those glyphosate-tolerant weeds. Oops.

For its part, Monsanto says it expects the EPA to approve the new, improved dicamba formulation in time for the 2017 growing season, and that it never expected farmers to use old dicamba formulations on the dicamba-tolerant crops it released this year. If the VaporGrip formulation does indeed control volatization as promised, the drift incidents of 2016 will likely soon just be a painful memory for affected farmers. If not, they portend yet more trouble ahead for the PR-challenged ag giant.