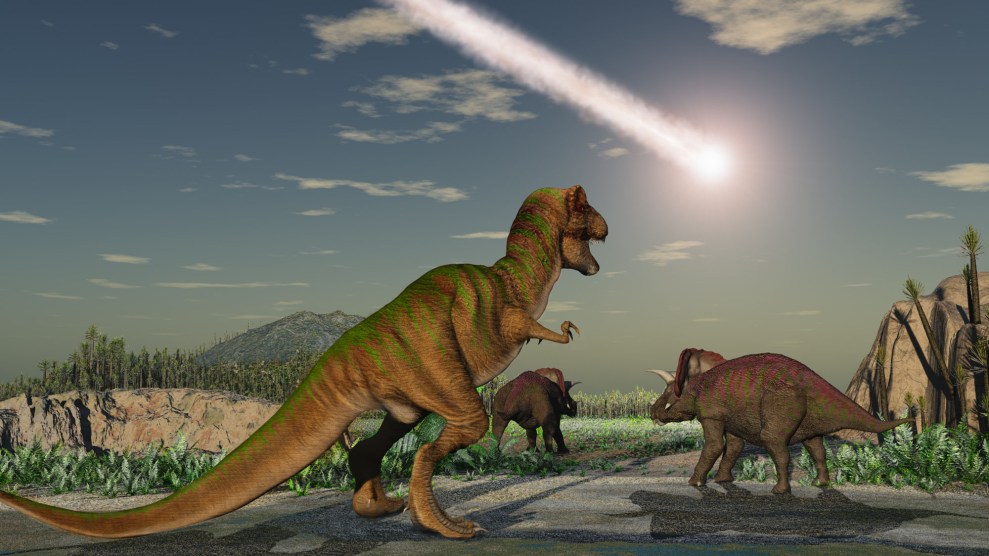 The story was originally published by Slate and is reproduced here as part of the Climate Desk collaboration.

What killed the dinosaurs?

That was a mystery for decades; when I was a kid, there were tons of ideas but precious little evidence for any of them, making them little more than speculation. In the late 1970s and early ’80s, though, the hypothesis was put forward that a giant asteroid or comet impact did the deed, and over the years evidence mounted.

The impact idea gained wide acceptance, but some details remained stubbornly difficult to explain with a single catastrophic event. Another idea that started gaining traction was that a series of huge and sustained volcanic eruptions occurred for a couple of hundred thousand years before the impact. These were no ordinary eruptions; they formed the Deccan Traps, a soul-crushingly huge region in India consisting of igneous rock layers more than two kilometers deep and covering an area of 500,000 square kilometers.

We’re not dinosaurs…if we choose not to be.

This long-lasting eruption did ecological damage across the planet, weakening life and killing species. The clock was ticking on the dinosaurs and so many other species. When the impact came, their time was up.

There’s pretty good evidence that it took both catastrophes to do in the (non-avian) dinosaurs and 75 percent of species on Earth, but a new study provides more support: Scientists found two warming pulses in Earth’s ocean temperatures corresponding to the times of both the volcanic eruptions and the giant impact. This suggests that large-scale global climate change effects were behind the mass extinction.

The scientists examined the shells of bivalves that lived around Seymour Island, near the tip of the peninsula sticking out from Antarctica. This is a good location to do this; the island dates back to before the time of the impact (called the Cretaceous-Paleogene boundary, or K-Pg boundary—C was already used for something else, so geologists went with K) and fossils from that time are abundant on the island. The deposits layered there provide a continuous sampling from before to after the boundary with little or no jumps in time, so the record is relatively clean.

They looked at bivalves because the critters absorb minerals from the water to make their shells, and the ratios of the amounts of some minerals in the water is temperature dependent. By carefully measuring the minerals in the shells (specifically, the ratio of oxygen-18 to oxygen-16), the scientists can then use them as a proxy for temperature.

What they found was a huge ~8° C (± 3°) leap in water temperature starting around 66.25 million years ago (roughly 150,000 years before the K-Pg boundary), which is when the Deccan Traps eruption started. The water started cooling again, but then there was another sharp rise of a little over a degree right at the K-Pg boundary, corresponding to the impact. That’s on average; some of the bivalve samples showed much larger spikes in temperature. (You can see a chart of the data here.)

I’ll admit, the data look a little rough to me. The second pulse has pretty big uncertainty bars, so it’s hard to tell exactly how big it was. The first pulse looks quite real, though, and does support the idea that the Deccan Traps contributed to geologically sudden and biologically deadly worldwide warming.

Interestingly, there was a long, slow warming and cooling period for a couple of million years before all this. While it was a large rise (about 8°) it happened over a long period of time, so the ecological impact wasn’t as bad. A smaller rise can do far more damage if it happens quickly, a point many climate change deniers ignore.

We use the dinosaurs as a metaphor; something slow, plodding, not terribly intelligent, and in imminent danger of going extinct. This new study shows that to still be apt; they were ill-prepared for both sudden climate change and a giant asteroid impact.

Humans are smarter than that. We have a space program, which is useful in both aspects; it can help prevent an impact, and our Earth-observing satellites are telling us very plainly that the climate of our planet is rapidly changing.

We’re not dinosaurs…if we choose not to be.