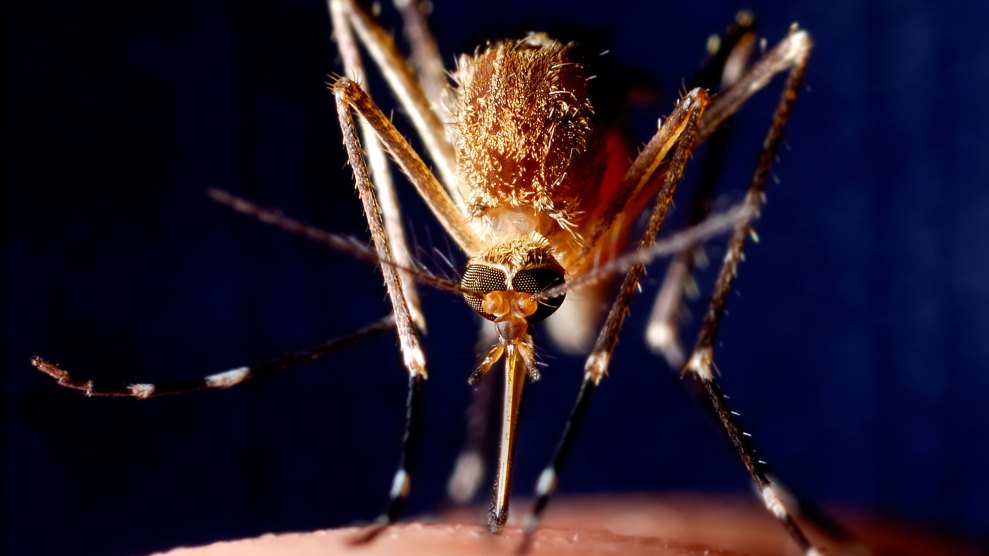 Mosquitoes may be small, but they pack a mean punch. Weighing in at a measly 2.5 milligrams, these buzzing arthropods are responsible for more deaths than snake bites, shark attacks, and murders combined. A whopping 725,000 people die each year from diseases transmitted by this common pest. Researchers have spent decades and millions of dollars fighting dengue, yellow fever, and chikungunya—dangerous viruses that female mosquitoes can spread in a single bite. Now—as scientists rev up efforts to tackle the worsening mosquito-borne Zika epidemic that’s rocked the Americas—some scientists are tapping into Earth’s oldest organic armies as they seek to wipe out these diseases.

In this week’s episode of the Inquiring Minds podcast, journalist and author Ed Yong explores the emerging science of the microbiome—the trillions of tiny organisms that inhabit the bodies of humans and other animals. Along the way, he tells host Kishore Hari about Wolbachia—one of nature’s most successful land-based bacteria—and its potential to aid the fight against Zika and other mosquito-borne illnesses. Wolbachia, says Yong, has “tremendous promise in bringing tropical diseases to heel.”

Wolbachia is extremely versatile; it can infect more than 40 percent of all arthropod species, including spiders, insects, and mites. Research has shown that female Aedes aegypti mosquitoes infected with the bacteria are unable to transmit common viruses, including Zika and dengue. And because Wolbachia passes from a female mosquito to her offspring, it could spread easily through a wild population. That means releasing a small batch of mosquitoes infected with the bacteria could help eradicate mosquito-borne diseases in a potentially short amount of time, says Yong. For a mosquito whose global range spans six continents—and includes a large chunk of the United States, the impact on global public health could be substantial. You can listen to the full interview below:

Despite years of research, treatments for many mosquito-borne illnesses is limited. Clinical trials for a Zika vaccine are underway, but researchers don’t expect one to be available to the public for at least 18 months. “There are no vaccines,” Yong says. “There are no good treatments for dengue. We need better ways of controlling these diseases.” Field trials of Wolbachia-carrying mosquitos have been underway in Australia since 2011, and in Brazil, Indonesia, and Vietnam since 2014. The results have shown great promise, with no ill effect on people or the environment.

Yong argues that Wolbachia is safer and more cost-effective than traditional vector control methods, such as spraying with insecticides. And unlike insecticides, bacteria are self-perpetuating. And Wolbachia doesn’t appear to affect mosquito populations, so other insects and animals that feed on these pests won’t miss a meal. “It’s not about killing mosquitos,” Yong says, “it’s about turning them into dead ends for viruses.”

To learn more about the incredible world of the microbiome, you can check out Yong’s new book, I Contain Multitudes: The Microbes Within Us and a Grander View of Life.