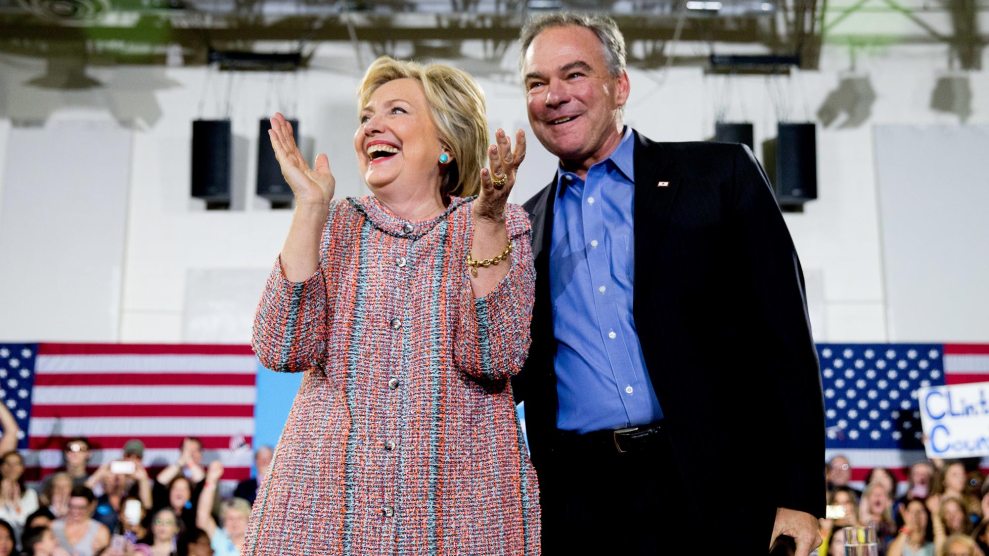 Sen. Tim Kaine campaigns with Hillary Clinton in his home state of Virginia. Kaine is one of the finalists to be Clinton's running mate.Andrew Harnik/AP

Virginia Sen. Tim Kaine, one of Hillary Clinton’s potential picks for vice president, appears to have an uncanny ability to appease special interests across party divides.

Kaine is no Elizabeth Warren on the environment, but he’s no Jim Webb either, getting good reviews from surprising quarters. As Politico reports, he opposed the Keystone XL pipeline, protected 400,000 acres of land from development as governor of Virginia, supports the Clean Power Plan, and has worked to make coastal communities prepare for climate change and sea-level rise. The League of Conservation Voters has given him a lifetime score of 91 percent.

Kaine, however, has also supported offshore drilling in the Atlantic—contradicting Clinton’s position—and supported a bill to fast-track the construction of natural gas terminals. Even fossil fuel interests have taken a liking to him. “We’re encouraged by the reasonable approach he’s taken on oil and natural gas, that he hasn’t been swayed by politics and ideology,” Miles Morin, executive director of the Virginia Petroleum Council, told Politico.

Of course, being on good terms with the fossil fuel industry is a cause for concern among some greens. “If Kaine is the pick, Hillary will need to stake out much clearer positions on drilling, fracking, and new fossil fuel infrastructure,” said 350.org policy director Jason Kowalski. R.L. Miller, Climate Hawks Vote co-founder and a chair of California Democrats’ environmental caucus, responded to Kaine’s record with a resounding, “meh,” citing his mixed record on fossil fuels as why he’s a bad pick to lure progressive Democrats to the polls.

Clinton is expected to announce her choice this week.