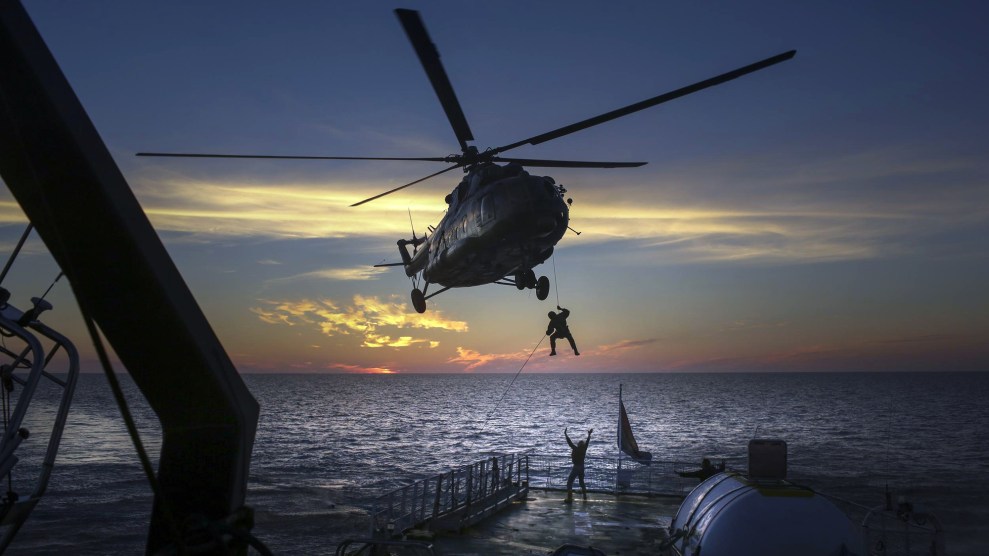 They rappelled from helicopters onto the ship. They showed their weapons before locking the captain and his crew inside the cabins. The intruders looked around, pillaged the crew’s booze, and started drinking. What began as a terrifying attack slowly turned into a rowdy encounter with intoxicated Russian commandos. 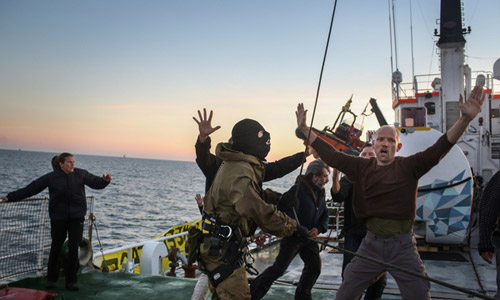 Russian special forces seized a Greenpeace ship in the Arctic Circle in September 2013. Greenpeace was there to protest Russian oil drilling. Denis Sinyakov/Greenpeace

That’s just one story told by Peter Willcox, a Greenpeace ship captain, on this week’s episode of the Inquiring Minds podcast. Willcox’s vessel, the Arctic Sunrise, was seized in the Arctic by Russia’s Federal Security Service in 2013. What followed was a four-day tow back to shore, an arrest on charges of piracy, and a hard time in one of Europe’s oldest prisons.

“We were told we would get 10 to 15 years and we better start learning Russian,” Willcox tells host Indre Viskontas. Ultimately, the piracy charges were swapped for less-serious sentences for hooliganism. Willcox and his 27 crew members, along with two journalists, ultimately spent more than two months in custody. Their arrest and imprisonment gained international media attention. 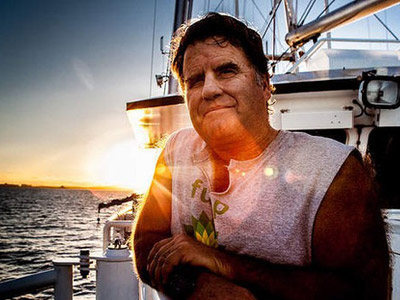 Greenpeace has been using dramatic, nonviolent actions in pursuit of its environmentalist mission since the 1970s. The situation in the Arctic three years ago was no different. The activists’ goal was to hang a banner near the steel sides of a Russian oil rig to protest the country’s drilling practices. So-called “banner actions” aren’t Willcox’s protest of choice: He prefers missions that are more straightforward (like the time he chained himself to a harpoon gun). Although Willcox and his crew had done something similar in the Arctic one year prior, in 2013 things got serious.

“They fired shots across our bow,” recounts Willcox. “We weren’t going away, and they flew out with a helicopter…and took over the ship.” As Russian special forces were towing Willcox and his crew to shore, all he could think, he recalls, was: “It’s another day at the office.”

Willcox clearly has no love for Russia’s criminal justice system. A trial, he says, “is pretty much a rubber stamp,” a mere formality in a system in which most of those detained are found guilty. Still, he takes the opportunity to criticize his own country as well. “Whenever I describe the Russian judicial system…I have to point out that here in the US we incarcerate over double the per capita population rate they do in Russia,” he says. “I think our judicial system, where poor people are forced into copping a plea and not having a trial, is nothing to smile at either.” (According to the Institute for Criminal Policy Research, per capita incarceration rates in the United States are roughly 50 percent higher than in Russia.)

Like any sailor, Willcox is full of stories, and he shares some of his most dramatic—and often heartbreaking—tales on Inquiring Minds. In 1985, for example, French spies blew up his ship as it sat peacefully in dock. A photographer was killed, and the vessel sank. The ship, the Rainbow Warrior, was on its way to French Polynesia, where the Greenpeace crew planned to protest nuclear testing in the Pacific.

You can listen to the full interview below.

Willcox’s accounts are riveting, but these days, there’s another—less headline-grabbing—side to his organization’s work.

“Now when we attack a problem, it’s not just a matter of going out and doing an action against it,” Willcox says. “Now it’s also lobbying, it’s also helping to write laws, it’s also doing research, it’s also publicity. It’s a whole gamut in order to affect the problem from all sides.”

You can find more of Willcox’s stories in his book Greenpeace Captain: My Adventures in Protecting the Future of Our Planet, which came out last April.