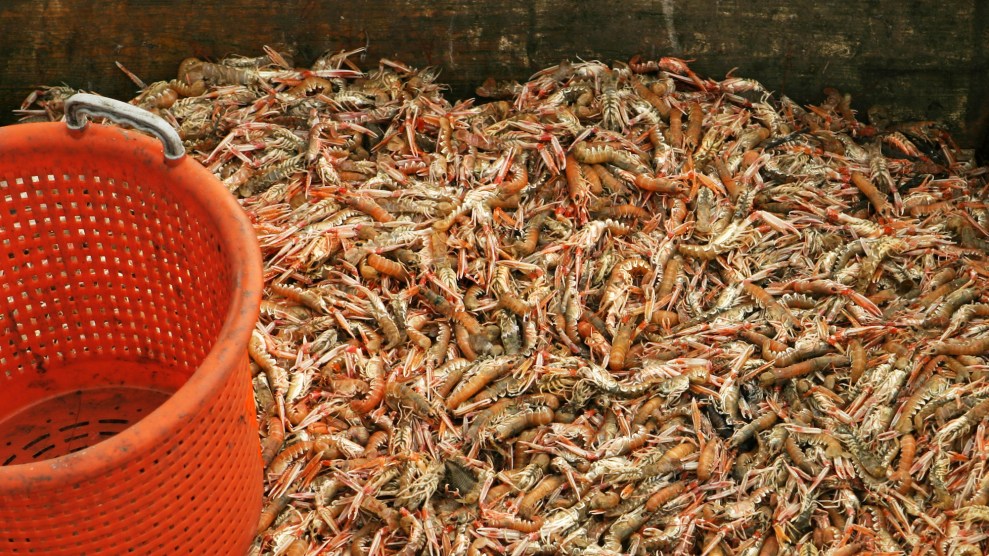 It’s been an ugly year for the seafood industry. Investigative reports by both the AP and the New York Times exposed widespread reliance on forced and slave labor from international seafood suppliers across Southeast Asia, prompting President Obama to sign the Trade Facilitation and Trade Enforcement Act in February. The bill banned the import of goods produced with forced labor, a concerted conclusion to months of startling headlines.

But labor abuse in the seafood sector isn’t a problem confined to Asia. A report published Wednesday by the labor group the National Guestworker Alliance suggests that some US seafood workers also experience abusive conditions. The report focuses on the experiences of undocumented and H2-B visa guestworkers shucking, peeling, and boiling shrimp and crawfish at seafood processing plants in New Bedford, Mass. and along the Louisiana Gulf Coast. Around 69 percent of shrimp produced in the US comes from the Gulf Coast.

“Stealing wages is standard business practice. The financial incentive to underpay guestworkers is far greater than the risk of getting caught.”

According to the NGA report, the US seafood industry has relied heavily on H2-B guestworkers and undocumented immigrants to drive down labor costs to stay price competitive with international producers. A 2009 survey in New Bedford found that nearly 75 percent of the workers in its seafood processing industry were undocumented immigrants. The US Department of Labor certified over 5,700 H2-B visas for seafood related positions in 2014, a marked 15 percent increase over 2013. Because employers grant H2-B visas, those on the receiving end are particularly vulnerable. Due to threats of retaliation by employers—including firing, which can result in deportation—guestworkers are often hesitant to report mistreatment. “Hours were long, wages were bad, housing was terrible—but we were all afraid that if we spoke up, we would lose our jobs, our housing, and our ability to ever come back to the US to work,” longtime H-2B guestworker Olivia Guzman Garfias told the NGA.

Here are some more striking details from the NGA’s report:

There’s a chance that you’ve bought seafood processed by exploited workers. The suppliers surveyed by the NGA distribute shrimp, crawfish, crab, and oysters to major national grocery chains, with a handful having sold to low-cost titan Walmart. (The company has cut ties with some of the suppliers, including CJ’s Seafood; read more in this in-depth Mother Jones piece on guestworker abuse).

A Walmart spokesperson issued this statement to Mother Jones in response to questions about the NGA’s report: “We care about the men and women in our supply chain, and Walmart’s Standards for Suppliers lists our social and environmental expectations for our suppliers, specifically addressing working conditions, voluntary labor, pay, the cultivation of a safe and healthy work environment, and freedom of association.”

The NGA’s report was presented at the International Labour Organization’s International Labour Conference, a meeting of delegates from governments, workers, and employers of ILO member states, staged May 30-June 10 in Geneva, Switzerland. The NGA, working in concert with the Asia Floor Wage Alliance (AFWA), exhorted the ILO to help bring an end to exploitative labor practices and protect migrant workers in global supply chains. The group put forth a number of possible solutions, calling for global legal regulation, acknowledgement of living wages as a basic human right, and expanded access to organizing for the migrant workforce.