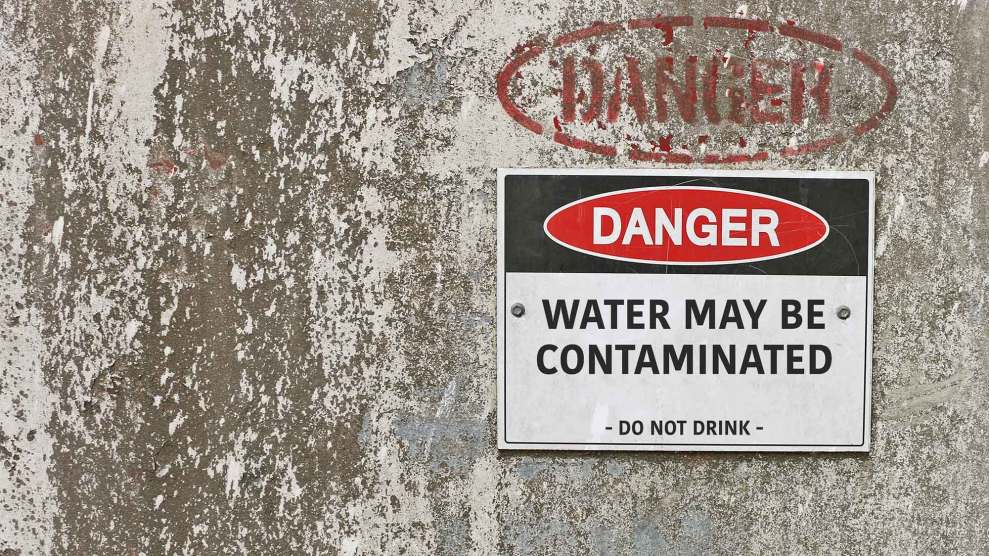 On a sweltering day last July, a team of scientists stood before a crowded room of people from the tiny town of Sanders, Arizona, and showed them a photo of a dilapidated wooden shack covered by hole-filled tarps. This, the scientists explained, was the town’s water source.

Tonya Baloo, a longtime resident and mother of two, did a double take. “It looked like a Third World country,” she says. “I was like, ‘Is this Africa?'” 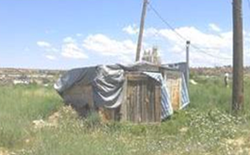 The researchers’ next image—a chart with a flat red line cutting through yellow bars—was even more worrisome. Tommy Rock, a Ph.D. candidate studying water contamination at Northern Arizona University, explained that the red line was the Environmental Protection Agency’s threshold for uranium allowed in public water systems: 30 micrograms per liter. The yellow bars represented uranium levels in Sanders’ water supply dating back to 2003. They hovered around 50 micrograms per liter.

For more than a decade, the chart showed, people in Sanders had been drinking contaminated water. 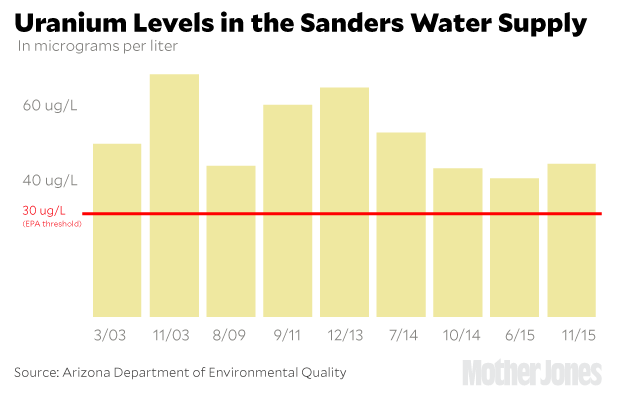 Residents listened, dumbfounded. Sanders sits on the edge of the Navajo Nation; uranium mines, relics of the Cold War, have long dotted tribal lands across the West. Long-term exposure to the heavy metal can cause kidney disease and cancer. But locals had never been notified of the contamination. Nor were they aware of the nearly 200 drinking-water violations that the local utility had amassed over the previous decade, ranging from uranium and bacterial contamination to failure to test the water.

“The initial betrayal,” Baloo says. “It was shocking.”

Roughly 6 million Americans use one of 2,300 public water systems that qualify as “serious violators”; 99 percent of those utilities serve fewer than 50,000 people.

The meeting happened two months before researchers in Flint, Michigan, revealed that their city’s water was laced with lead. In both cases, curious scientists exposed years of drinking-water violations that affected predominantly poor, minority communities. (Most Sanders residents are Navajo and live on less than $20,000 per year.) But unlike urban Flint, Sanders is home to just 630 people and consists of a cluster of single-family homes, a gas station, a dollar store, two churches, and a trading post—all surrounded by miles of red rock and sage brush. 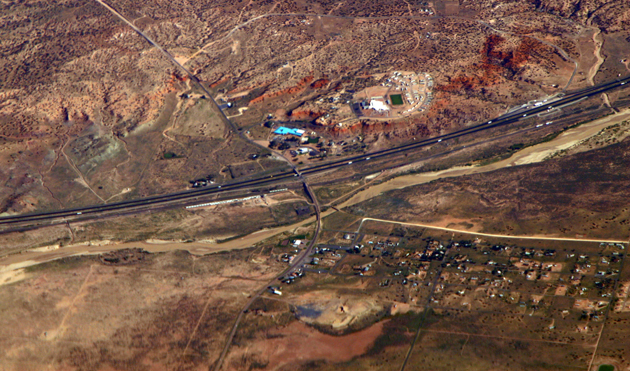 The town is one of thousands of rural communities across the country where water quality has quietly evaded federal health standards for years. Many small utilities simply cannot afford advanced water treatment technology, says Jeff Griffiths, a public health professor at Tufts University and a former adviser to the EPA on drinking water. (An inspection of the Sanders well in 2012, for example, found that “the owner pours an unapproved bleach product down the casing vent daily as the method of disinfection.”) According to EPA data, roughly 6 million Americans use one of 2,300 public water systems that qualify as “serious violators”—defined as having multiple, continuous, or serious health or reporting problems. Ninety-nine percent of those utilities serve fewer than 50,000 people. Together, they serve a population 25 times the size of Flint.

A week after Rock’s presentation, Sanders residents received a notice in the mail from the Arizona Department of Environmental Quality (ADEQ) informing them of the high uranium levels in the local water supply—a first since the contamination was reported to the state in 2003. Long-term exposure can increase the risk of kidney disease and cancer, it said, but the situation wasn’t an emergency. “You do NOT need to seek an alternate (for example, bottled or hauled) water supply,” it read. “The water remains safe to use until treatment is put into place.”

Many residents, wary of the state’s assurances, avoided the water. Baloo brought her kids an hour away to her mom’s house for baths. Genevieve Lee, a 73-year-old retired teacher, resorted to eating canned food and taking sponge baths out of a bucket. She made 40-minute treks to Gallup, New Mexico, for water and often found herself wondering about the uranium’s impact. Did it contribute to her breast cancer in 2008? To her neighbor’s kidney disease?

Lee, Baloo, and others formed a water task force, petitioning for the town to connect to a nearby, well-maintained utility in the Navajo Nation. “All we think about is water,” Baloo told me this spring.

The hubbub led Sanders school system superintendent Dan Hute to test the schools’ water supply, which comes from a private well unaffiliated with Sanders’ water system; the water in Sanders elementary and middle schools was also contaminated. Hute tapped into school budgets to provide bottled water to roughly 500 students and 150 teachers. “I’ve gotten no help from anybody,” Hute told me earlier this spring. According to Rock, no local, state, or federal agency provided the town with bottled water or filters.

Under the Safe Drinking Water Act, utilities are required to notify their customers if water has contaminant levels above the EPA’s threshold. If they fail to do so, the law calls for the “primacy agency”—in Sanders’ case, the state—to intervene. After 30 days, the EPA steps in.

“These people have been drinking this for years. It’s not a short-term exposure. I’m a little baffled by their lack of concern.”

Though the policy sounds simple enough, the reality is far murkier. Dr. Bruce Macler, an EPA toxicologist who helped decide to tell Sanders residents that their water was safe, explains that when it comes to uranium, the feds have a standard in place. “It’s no joke,” he says. “That’s why we go after them if they exceed it. But it isn’t terribly worrisome if they’re a little over the level.” If the contaminant were an “acute toxicant”—say, giardia—being over the standard wouldn’t be tolerated, he explains. But “when you’re looking at something that takes a lifetime of exposure” to produce health effects and the benchmark is already conservative, Macler says, it doesn’t make sense to tell residents to use other water sources: “The stuff isn’t that risky.”

Many disagree. “It’s unbelievable to me that they would have such a cavalier, unconcerned attitude,” says Chris Shuey, a researcher at the Southwest Research and Information Center who studied Sanders’ water with Rock. “These people have been drinking this for years. It’s not a short-term exposure,” says Doug Brugge, a biologist at Tufts University who studies the impact of uranium. “I’m a little baffled by their lack of concern.” (An EPA spokeswoman says the agency was concerned about the contamination of Sanders’ water and was working on establishing an alternative source.)

State records show that over the past two decades, environmental regulators repeatedly approached the local utility’s owners, an elderly couple named Pat and Lillie Paulsell, about the poor water quality. (Pat maintained the well until his death in 2014, when Lillie took over the utility, Arizona Windsong Water Company. Lillie Paulsell declined to be interviewed for this article.) An inspection in 1995 found that Windsong wasn’t testing for bacterial or lead contamination. By 2002, the utility had risen to the top of the EPA’s “Significant Noncompliance” list due to a host of reporting and health problems. Yet, according to an ADEQ representative’s notes from that year, Pat Paulsell “continued to make no effort to comply other than to send me a package of analytical results, which I have not yet received.” In 2012, a state-commissioned water quality report noted live wiring on the floor of the well. Uranium contamination continued to be a “major problem.” In 2014, the utility paid a $1,000 penalty to the EPA for its violations—but the uranium levels continued to exceed federal standards.

“There are Sanders equivalents all over the country.”

The records also show that the Paulsells were struggling financially and unable to keep up with the growing number of required tests and treatment plans. “I don’t know what you mean by emergency operations plan. Also a microbiological sample plan,” Pat wrote to the ADEQ in 2001. “I have tried very hard to keep all samples done that are supposed to be done.” When an ADEQ representative asked if he had a copy of the rules for water utilities, Pat replied, “You people are always changing them!” In 2002, an inspector found that the couple’s “current health is poor.” Pat, 69, was using a wheelchair. In 2009, he faxed a handwritten letter along with water sample results. “It costs between $35 and $45 each month to send this water sample. The power bills have more than tripled in the last 3 years. I have worn out a ¾ ton new pickup just on the water co…I can’t continue to operate this co with this small income.”

“There are Sanders equivalents all over the country,” says Macler, the EPA toxicologist. “Small little communities that have limited ownership, no money, no resources.” Many, adds Griffiths, the former EPA drinking water adviser, are unwilling to cooperate with state and federal regulators, which don’t have the financial capacity to force the matter. “We have a foolish system for how we deal with this stuff,” he says.

In early April, eight months after the state distributed a water advisory and more than a decade after the first reported uranium, Sanders residents got some good news: Arizona and the Navajo Nation agreed to let Sanders switch water sources to the nearby Navajo utility. Within the month, water from a new source was flowing through the old pipes, which will be replaced this summer.

“From my standpoint, this is more of a success than a failure,” Macler says. “Could it have been sooner? Yeah. Are we glad that it’s done? Yeah.”

“It’s a really big sigh of relief,” says Tonya Baloo, who’s now watering the trees in the yard and letting her kids bathe at home every once in a while. Her family still drinks from jugs of water she buys from Walmart. Maybe after the pipes are fixed, she says, they’ll once again start drinking from the taps.