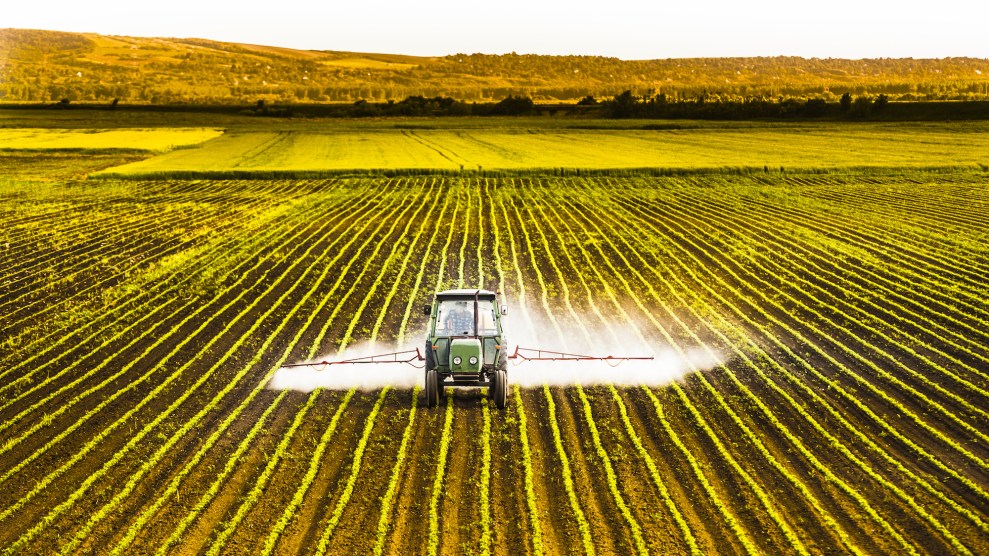 A farmer sprays a corn field with pesticides. <a href="http://www.shutterstock.com/pic-419658139/stock-photo-tractor-spraying-a-field-of-corn.html?src=ZEsza3OnZZn9DyO7nIf3Ng-1-40">pajtica</a>/Shutterstock

UPDATE: Bayer has revealed the value of its offer for Monsanto: $62 billion. It’s a serious bid—it represent a 37 percent premium over Monsanto’s market valuation just before takeover rumors started circulating, Bayer says. But according to The Wall Street Journal’s Helen Thomas, it’s a little less than what ChemChina ultimately ended up paying Monsanto’s rival and one-time takeover target Syngenta, when you compare the takeover prices to the companies’ profits. That’s why I’m skeptical that this deal will actually happen. Monsanto shareholders and management will likely hold out for a valuation comparable to the one ChemChina placed on Syngenta; and Bayer shareholders are already expressing sticker shock at the current offer. But you never know.

Last year, US pesticide and seed giant Monsanto noisily stalked its Swiss rival Syngenta, in a bold effort to combine the globe’s biggest seed company (itself) with the largest maker of insect- and weed-killing chemicals. The effort ultimately flopped, but it set in motion a veritable merger frenzy among the handful of companies that dominate the the global agribusiness trade. Syngenta succumbed to Chinese chemical giant ChemChina, US titans Dow and DuPont combined (in deal still pending regulatory approval), and Monsanto openly salivated over the agrichemical divisions of German giants BASF and Bayer.

It would mean that the same four gargantuan companies sell upwards of 60 percent of the globe’s seeds and pesticides.

Now, however, Monsanto has emerged as the hunted party, and it is a European rival—Bayer—that is taking aim. In a Wednesday statement, Monsanto acknowledged “an unsolicited, non-binding proposal from Bayer AG for a potential acquisition of Monsanto, subject to due diligence, regulatory approvals, and other conditions.” Neither company has publicly discussed a price. The Wall Street Journal puts it at “more than $42 billion” for “what could be the biggest foreign corporate takeover effort ever by a German company” and the “largest deal in Bayer’s 150-year history.”

Quoting an estimate from Bernstein Research analyst Jeremy Redenius, Reuters reports that the price tag could be north of $50 billion.

Like Monsanto, Bayer has public-image challenges. Its blockbuster neonicotinoid pesticides have been temporarily banned in Europe under suspicion of harm to honeybees and other pollinators. It’s also a major maker of bisphenol-A (BPA), a widely used chemical that has been linked by a mounting weight of science to obesity and developmental troubles in kids.

A combined Bayer-Monsanto would rival the emerging Dow-DuPont in seed/agrichemical girth. It would mean that the same four gargantuan companies sell upwards of 60 percent of the globe’s seeds and pesticides. I’ll be closely following this drama as it plays out.