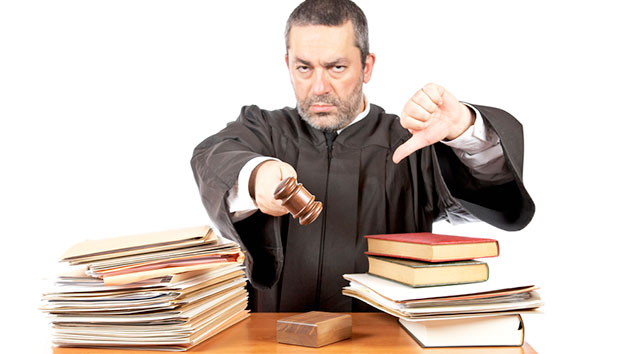 Volkswagen will likely be spending a lot of time in court over the next few years. On Monday, the automaker was presented with a new lawsuit from the Justice Department over allegations that it had illegally rigged half a million cars sold in the United States to cheat on emissions tests. The suit is the first step the Obama administration has taken to hold VW accountable for the scandal, and it could leave the company on the hook for billions of dollars in fines. Federal criminal charges could also be forthcoming.

Meanwhile, VW is also facing a torrent of outrage from some of the folks who bought those cars, which include the diesel-powered versions of Jetta and Golf models made since 2009. A court in Northern California is scheduled to decide this month whether to hear a group of more than 350 class-action lawsuits from VW customers who feel they were misled about the environmental benefits of the cars before buying them.

But now, lawyers for those plaintiffs are nervously eyeing a Republican-backed bill that could make it much harder to mount a class-action case against Volkswagen—or any class action at all, for that matter. The House is expected to vote this week on the Fairness in Class Action Litigation Act, sponsored by Rep. Bob Goodlatte (R-Va.), who chairs the House Judiciary Committee. The bill is tiny, just about 100 words long. But it would hand a big advantage to corporations opposing suits from aggrieved customers and employees, legal experts said.

In a statement released after the bill passed out of committee this summer, Joanne Doroshow, director of New York Law School’s Center for Justice and Democracy, said the new law would “wipe out one of the most important tools for justice in America.”

“This bill is particularly insidious. It uses a very few words to do great damage to consumer rights.”

Class actions are a powerful way for consumers and employees to hold corporations accountable. They allow plaintiffs who have similar complaints, typically against a corporation, to team up and pool resources. Famous cases include the thousands of commercial fishermen who successfully sued ExxonMobil after the Valdez oil spill and a suit by investors against Enron. It works particularly well when the losses in question—for example, the premium of a few thousand bucks you might pay for an environmentally friendly car—are too small on an individual level to justify mounting a legal case against a massive company, but add up to a lot if you combine everyone whom was wronged.

Goodlatte’s bill would raise the bar for plaintiffs to join a class action, requiring each of them to have “suffered the same type and scope of injury.” In other words, in order to qualify as a class, plaintiffs would have to prove that they were all affected in exactly the same way. The wording is vague enough that judges would have some leeway in deciding how strict that criteria needs to be, experts said. But it could create a situation where even minor differences—for example, the number of miles driven on a Volkswagen, or whether it was purchased from a licensed dealer or a private seller—could make it impossible for the plaintiffs to qualify as a class. Without class status, it could be much harder and more costly for individuals to fight a corporation with whom they have a grievance.

“This bill is particularly insidious,” said Lori Andrus, a San Francisco attorney who is representing Volkswagen customers in one of the pending lawsuits. “It uses very few words to do great damage to consumer rights.”

Andrus said she was worried that if the bill became law, it could threaten her case, since not all the Volkswagen customers have the exact same cars, purchased and driven under the exact same conditions. Proving a class status is already hard enough, she said.

John Coffee, a professor at Columbia Law School who is one of the country’s leading experts on class actions, agreed the bar for class actions is currently quite high.

“I think this law is unneeded,” he said in an email. “The Supreme Court has already greatly constrained, and is continuing this year to limit, class actions, and this makes legislation such as this both superfluous and confusing.”

Class action suits have already been dealt some serious blows in recent years.

Indeed, class actions have been dealt a couple of serious blows in recent years. In 2011, conservatives on the Supreme Court succeeded in throwing out a suit brought by female Walmart employees alleging gender discrimination because, the court said, each woman’s case was too different to be considered as a class. Lower courts subsequently followed the precedent and threw out several big class-action suits, including one brought by homeowners against Bank of America over its allegedly misleading lending practices.

The Supreme Court is now considering a case involving Tyson Foods. That company has asked the court to throw out a class action brought by employees claiming wage theft, arguing that because each employees’ working situation was different, they don’t qualify as a class. As my colleague Stephanie Mencimer reported, the Tyson case “is a classic example of why these sorts of collective legal actions are so crucial in enforcing the nation’s employment and consumer protection laws,” because “if every individual worker screwed out of overtime pay at Tyson’s Iowa plant had to file a separate lawsuit, no lawsuits would ever get filed, and the practice would persist because no lawyer would take a case with such a low dollar value.”

Perhaps unsurprisingly, the Tyson case and the Goodlatte bill have a key character in common: the US Chamber of Commerce, which represents business interests. In the Tyson case, the Chamber filed briefs supporting the company’s position; the Chamber has also lobbied Congress on Goodlatte’s legislation, according to federal records. Goodlatte’s office declined to comment, and the Chamber did not return a request for comment.

In a letter to Goodlatte last summer, the Chamber argued the bill was necessary in order to “eliminate overbroad, no-injury class actions.” But Andrus thinks it would do much more than that.