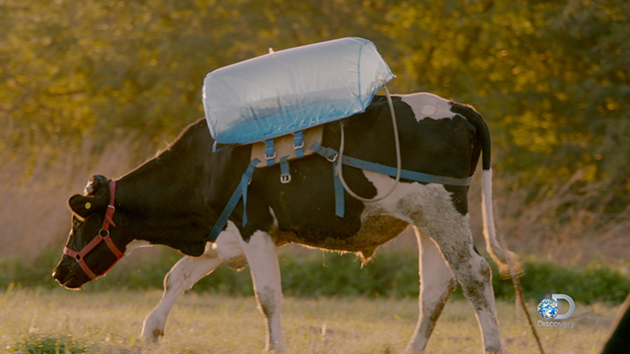 Cows are gassy beasts. And this gas is bad for the planet. Last year, my colleague Josh Harkinson detailed just how dangerous this gas has become in our atmosphere:

Cows are already the nation’s single largest source of methane, a greenhouse gas produced by oil extraction, decomposing trash, and the guts of grazing animals that’s as much as 105 times more potent than carbon dioxide. A single cow farts and belches enough methane to match the carbon equivalent of the average car. According to a 2006 United Nations Food and Agriculture Organization report, the world’s 1.4 billion cows produce 18 percent of the world’s greenhouse gases—more than the entire transportation sector.

Our hunger for beef is a big problem for the climate: More cows, more methane, faster warming. Now we have a sensational new visual way to understand exactly how much methane we’re talking about, thanks to a new documentary called Racing Extinction, which airs on Discovery Channel Wednesday night in 220 countries and territories around the world—a date designed to coincide with the early days of the high-stakes UN climate summit, where diplomats are attempting to forge a new global deal to limit greenhouse gas emissions.

To measure just how much a single cow emits every day, scientists at the National Institute of Agricultural Technology hooked up inflatable plastic bags to cows’ stomachs. Then they fed them. And then, they watched the methane bags inflate. Check out the time-lapse:

Look, they even have special belch-backpacks:

Watch the entire fascinating segment below, courtesy of Discovery. And check out the documentary Wednesday night, at 9 pm ET: